The Scientist is cautious about covering preprints, given their preliminary, unreviewed nature, but this one raised so many questions that we thought it deserved a closer look. To summarize, researchers surgically joined the circulation of a female rat with that of a castrated male with a transplanted uterus. This allowed them to transfer embryos into the uteruses of each animal, and 4 percent of the time, the males were able to maintain the pregnancy and deliver viable pups via Cesarean section. The first author of the preprint, graduate student Rongjia Zhang at the Naval Medical University in Shanghai, China, told freelance writer Andy Tay that she was interested in the feasibility of the approach and suggested that it could serve as a model for interrogating reproductive biology more broadly, but outside experts questioned the utility and ethics of the work. Certainly, unlike the use of transplantation to provide XX individuals lacking a functional uterus the ability to carry their own children, this parabiosis setup is not a practical way to enable pregnancy in humans. 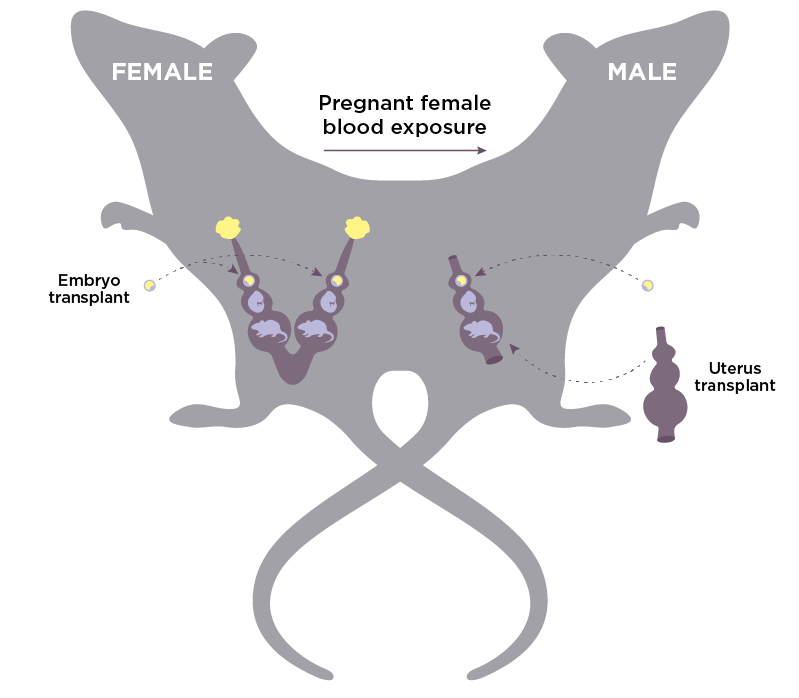 A New View of My Own Past

My favorite story of 2021 was an editorial that, unlike most, I did not write. The piece, penned by Managing Editor and longtime colleague Jef Akst, set the stage for our August issue, which focused on the science of pregnancy. In her editorial, Jef relayed her personal reproductive journey, sharing with readers some of the intimate challenges she faced in starting her family. Rarely do journalists have the opportunity (not to mention the bravery) to cover ourselves in the pieces we write. Anyone who read that editorial knows that Jef was able to do that with aplomb.

In addition, Jef and the rest of the TS editorial team helped me craft a statement that we appended to Jef’s editorial that described our ongoing journey toward inclusive language. It was an opportunity to share with readers the behind-the-scenes considerations made and lessons learned as we aimed to communicate the nuances of a topic that affects the whole of humanity. The process of creating a special issue on the science of pregnancy reminded me that words really do matter and that it’s important to invite people of all backgrounds to interact with our work.

I’m a sucker for our Foundations column because I love a good science history story. What I found particularly striking about this piece, written by former intern Annie Melchor, is that scientists were still debating the strange phenomenon of menotoxin—the idea that menstruating women exude a dangerous chemical—as recently as the 1970s. I still don’t feel that there is compelling evidence on either side to prove or disprove its existence. Is this an example of men making outlandish claims about women’s bodies, or is there something to it? Something appears to have happened to those flowers. It’s a fun holiday dinner table conversation starter, to be sure!

Behind the curtain, this story is also a lovely group effort, born out of a conversation among multiple staffers, written by Annie—who tracked down a century-old German manuscript and translated it herself—and edited by me.

In the 1950s, psychologist Beatrice Gelber gained notoriety for her claims that unicellular organisms could learn, seemingly ignoring a well-accepted boundary between “higher” organisms, such as dogs and people, and “lower” organisms, such as protists and bacteria. This feature takes a look at the revival of this idea seven decades later, as researchers work to understand the nature of memory and learning. It’s my favorite sort of story to write, being a study not only of science but of the scientific community and its attitude towards unusual ideas.

Mammalian Embryos Might Not Need Primitive Streaks After All

My favorite stories tend to be about findings that go beyond the scale of a single discovery and have the potential to influence the very way that science is conducted. In this case, a comprehensive literature review of research on the early stages of embryonic development suggested that the “two-week rule,” an ethical guideline that recommends terminating embryos used in experiments at the point when a structure called the primitive streak appears, is an arbitrary rather than scientific cutoff. That’s because, the review suggests, the streak is far less important to development than scientists have assumed. The story represents a potentially important inflection point in biomedical research history as scientists, regulators, and ethicists chart the best way to allow for innovative research while safeguarding ethical boundaries.

I love when a story not only provides insight into a particular phenomenon, but it also changes the way I think about the world. That’s what made reporting the story on lemon frost leopard geckos so rewarding. At first blush, a tale about Mr. and Ms. Frosty—a pair of uniquely colored pets that cost their owner $10,000—seems like it would be frivolous and fun. Instead, it’s a story about discovering the genetic underpinnings of a particularly dangerous form of skin cancer, and how a collaboration between scientists and other kinds of animal experts can prove unexpectedly fruitful. As I was reporting, I saw an even broader picture, about what it means for a species to be a good model organism, and how scientists may be shortsighted when it comes to nontraditional models. I walked away hoping to hear more about these geckos—and who knows, maybe in 2022, I’ll get to write a follow-up.

In the midst of life sciences coverage dominated by COVID-19, it was a breath of fresh air to get to learn about an unlikely partnership between an elderly volunteer nature guide captivated by a mountain vine and a tropical plant researcher. As they found out, the vine, known in Japanese as miyama-nigauri, grows specialized leaves that trap heat around its fruit, aiding their development. “This paper was really interesting in tying together some of those reproductive and vegetative traits, and how they can interact,” University of Wisconsin-Eau Claire plant biologist Nora Mitchell, who was not involved in the study, told me.

SARS-CoV-2’s Wide-Ranging Effects on the Body

This September feature, penned by freelancer Diana Kwon, is an absolute gem. The story gives an overview of the myriad ways SARS-CoV-2 can harm the human body, beyond the damage to the respiratory system that we generally associate with COVID-19. The accompanying infographic contains a legend showing how researchers know the disease can be at fault in each area.

As social media editor for The Scientist, moderating Facebook comments over the past two years has been stressful. While there certainly were comments on this article from knuckleheads only there to troll, they were outnumbered by those engaging in thoughtful dialogue, comparing symptoms, discussing the reality of long COVID, and correcting misinformation. Diana’s feature sparked meaningful conversation and compassion—a rarity for the comment section of stories about COVID-19.