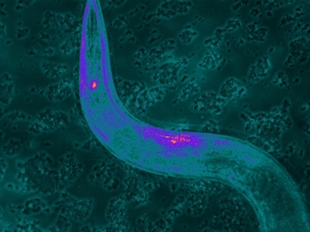 The nematode version of a gene central to mammalian hearing turns out to encode a salt sensor, according to new research published today (January 30) in Nature. The study is the first to describe the function of nematode TMC-1, a protein that appears to aid in sensing (and avoiding) high concentrations of salt when expressed in specialized neurons, and may help elucidate the mechanics of mammalian hearing.

The new work on TMC-1 “is a really important paper for the hearing field as well,” said neurobiologist Jeffrey Holt at Harvard University Medical School, who was not involved in the research. The new data suggest that TMC-1 acts as an ion channel and that it may work similarly in the mammalian auditory system, Holt added.

Previous work in nematodes had shown that sensing low salt concentrations relied on...

The researchers first came across TMC genes while doing expression profiling of nematode neurons involved in sensing unpleasant stimuli, including touch. Because mutations in the Tmc1 gene affect hearing in mice, Schafer and his collaborators decided to test TMC-1’s role in touch sensation—which, like hearing, relies on mechanoreceptors—in worms.

Using GFP mutants, they found that TMC-1 was primarily expressed in certain sensory neurons that help worms detect and avoid unpleasant stimuli, such as heavy metals and being poked on the nose. After knocking out tmc-1 in worms, they subjected the animals to various off-putting stimuli, such as nose touch, high salt concentrations, and copper chloride. Though tmc-1 mutant worms still recoiled from pressure, showing that TMC-1 is not involved in nematode mechanosensation, they no longer avoided salt concentrations that climbed above 100 mM, which normal worms find noxious.

Expressing tmc-1 in neurons that don’t usually express the gene conferred salt sensing abilities to these cells, and Schafer and his colleagues found that tmc-1 expression also creates a sodium-dependent current, suggesting that TMC-1 acts as an ion channel.

Inside the inner ear, mechanosensitive ion channels are located on the tips of sound-sensitive microvilli called stereocilia. These stereocilia are connected by filaments called tip links, and when sound waves move the cilia, the tip links stretch, pulling open ion channels and generating an electrical current that transmits to the brain. TMC-1’s apparent ion channel function suggests strongly that TMCs are the ion channels critical to hearing.

Sensory receptors tuned to various stimuli are not uncommon, Holt explained. The TRP ion channel family is also “multi-modal,” responding to stimuli including temperature and pressure, depending on context. TMC ion channels may be similar, he suggested. “Evolution tends to make use of tools already available and repurpose them for another function.”

Holt also noted that the “inner ear goes to great lengths” to keep sodium ions out of the fluid in which it is bathed—potassium ions are used instead. The new research suggests the possibility that this “may reflect the need to eliminate a superfluous stimulus,” and prevent sodium from activating TMC ion channels, Holt said.

It’s not clear, however, whether tmc-1 is involved in salt sensing in other animals, such as mice or humans, noted Sue Kinnamon, a taste researcher at the University of Colorado, Denver, who was not involved in the study. Although it’s likely that salt sensing in other mammals will also rely on an ion channel, salt sensing is not well conserved even between mice and humans, she explained. Salt sensing machinery depends upon an organism’s ecological niche and nutritional needs, Kinnamon added, which explains why mice and other herbivores, which have a strong dietary need for salt, may have different sodium sensing mechanisms than other mammals.

Schafer is hoping to further explore the relationship between TMC-1’s structure and function. Mutational studies will help them identify which residues are important for salt sensing and which—if any—help form the ion channel pore. Nematode neurons might also be a great venue to express the human TMC1 and learn more about its function, he said.

In the meantime, Holt is excited by “the step forward” and hopes that a few follow-up experiments will “conclusively demonstrate that TMCs are the sensory receptors in auditory hair cells.”