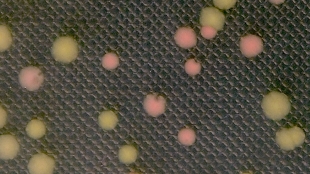 Colonies of altruistic Escherichia coli lambda (green) and selfish E. coli HK97 (red), showing indentations in the red colonies where viral infection is spreading.DOMINIK REFARDTFor Escherichia coli, suicide can have fitness advantages in the face of deadly infection, even if the suicidal individual is surrounded by distantly related neighbors, according to new research published today (March 20) in The Proceedings of the Royal Society B: Biological Sciences. Researchers demonstrated that suicide designed to limit a virus’s spread through bacteria can still benefit the suicidal strain even if some the bacterial cells saved by the voluntary death are not related.

“The important thing here is that programmed death outcompetes non programmed death at a level other than the single cell, and that’s remarkable,” evolutionary biologist Pierre Durand of Witwatersrand University in South Africa, who did not participate in the research, said in an email to...

Suicide appears to be common to many organisms, from bacteria that undergo programmed cell death to insects that leave their hive to die when infected with a pathogen. It’s thought that this behavior evolved because it can benefit close relatives of the suicidal—allowing those genes shared by the family to be passed on. But inspired by the Swiss folk hero Winkelried who sacrificed himself for the good of Switzerland, Dominik Refardt at the Swiss Federal Institute of Technology wondered if suicide could benefit the community as a whole, even if not all members were highly related.

Refardt examined bacteria that carry out a suicide program upon viral infection. He compared two strains of E. coli bacteria and their responses to a bacteriophage that kills cells—and spreads more virions—within 15 minutes. In one strain, E. coli l, individual bacteria perform programmed cell death before the virus finishes the job, preventing the virus from transmitting to more cells; in the other, E. coli HK97, the bacterial cells cling to life until the virus kills them, allowing the infection to spread through the population.

Under normal conditions, the strains grew equally well when mixed in a liquid culture, showing that carrying the suicide genes didn’t appear to come at much cost. And upon infection with the virus, only the mixtures containing at least 95 percent E. coli l bacteria could survive the infection.

Unlike bacteria in liquid medium, however, bacterial cells in solid agarose matrix can form small colonies of highly related cells, a population structure that may affect survival during a viral infection. Sure enough, the researchers found that in solid environments, even when l cells comprised much less than 95 percent of the culture, the population could survive viral infections by halting the virus’s spread in the l clusters—even as HK97 cells died off.

To determine how tightly knit the l colonies must be to stave off the spread of infection through the entire population, Refardt grew HK97 and l cells in media of varying viscosity and infected them with the lytic virus. He used culture media made with differing percentages of agarose, with lower agarose translating to a more liquid medium, allowing the clones drift apart. He found that even in cultures with very low concentrations of agarose, where bacterial relatives are more dispersed, the l strain still grew more abundantly than the HK97 cells. This suggested that bacterial suicide is a beneficial adaptation even when some nearby cells saved from infection are non-relatives.

“It shows that altruistic suicide can work and matter for mechanisms of resistance” to infection in a naturally occurring system, supporting previous findings made in slightly more artificial systems, said evolutionary biologist Sylvain Gandon at France’s National Centre for Scientific Research, who did not participate in the study.

The findings also help address the evolutionary origin of adaptive programmed cell death, said Durand. Initially speculated to be a characteristic of multicellular organisms, the phenomenon has been demonstrated by Durand and others in single-celled eukaryotes and prokaryotes like Refardt’s E. coli. Now, “the authors show that even in this early stage it can be adaptive,” Durand explained. “One can get very philosophical about this, but it is remarkable just how important a role ‘voluntary’ death may play in sustaining life.”

D. Refardt et al., “Altruism can evolve when relatedness is low: evidence from bacteria committing suicide upon phage infection,” The Proceedings of the Royal Society B: Biological Sciences, doi: 10.1098/rspb.2012.3035, 2013.