For a fish with such a remarkable retina, the silver spinyfin has a rather modest appearance: its body is a small, flattened, disc bearing a frowning mouth and a ridge of short, bony spines along its belly. But its large, impressive eye, researchers report today (May 9) in Science, has earned Diretmus argenteus the honorable title of vertebrate with the most types of visual opsins—the light-sensitive proteins that form the basis of photoreceptor cells of the retina. These likely help the swimmer see in the dark, hundreds of meters below the sea surface, where it spends most of its life.

Human retinas have four types of visual opsin: three present in cone cells, which allow us to see blue, green, and red, and one in rod cells, which enables vision in dim light. The silver spinyfin produces up to 14...

“The most interesting finding is this discovery of multiple rod opsins in some species of deep-sea fish. That’s very surprising that there would be so many,” remarks Eric Warrant, a neuroethologist at Lund University in Sweden who wasn’t involved in the study but has collaborated with two of its coauthors in the past. 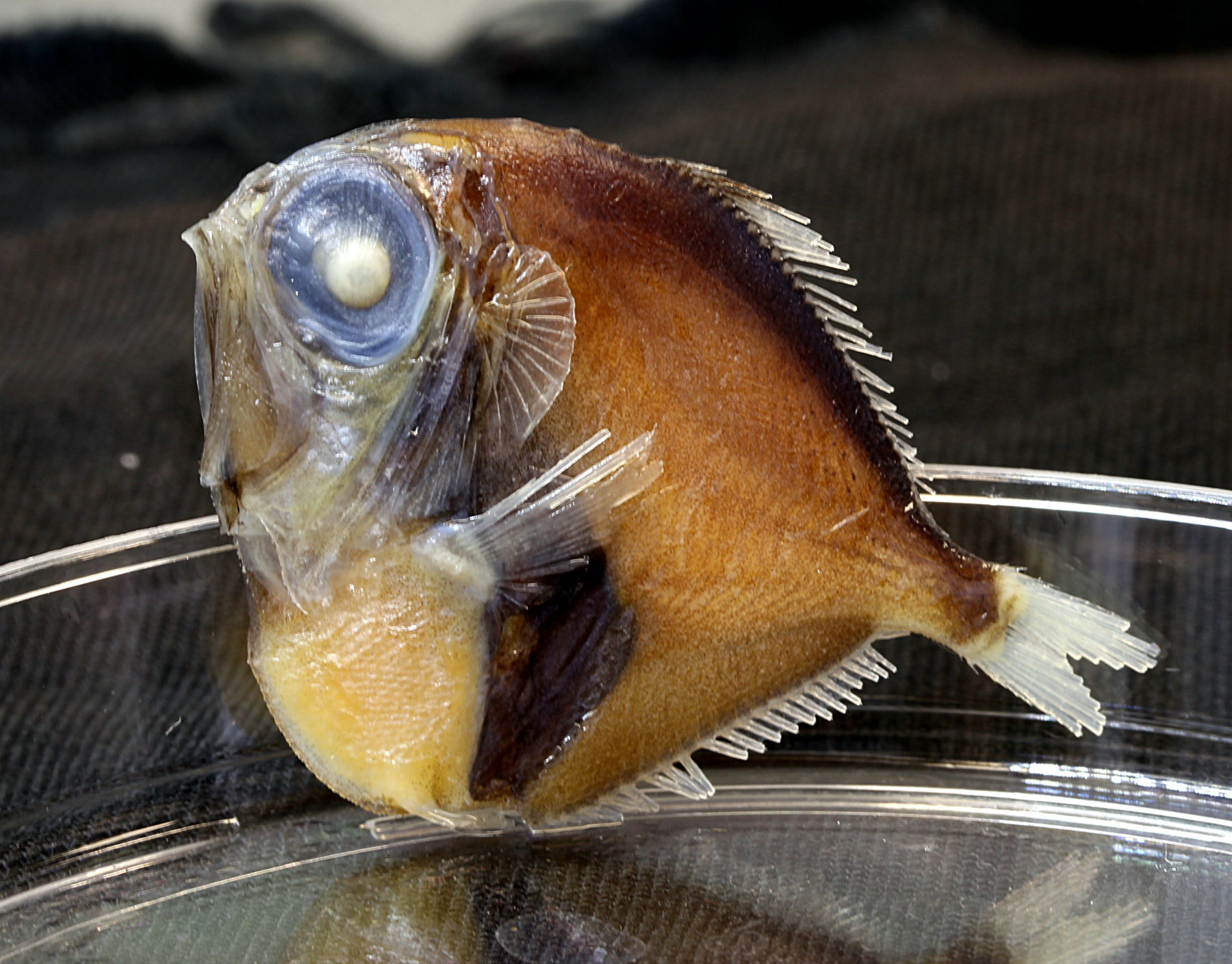 The findings were also a surprise to the lead authors, biologists Zuzana Musilova of Charles University in Prague and Fabio Cortesi, a postdoc at the Queensland Brain Institute in Australia who initially set out to better understand the evolution of the fish visual system generally. Overall, they found that teleost fish—the most diverse group of the so-called ray-finned fish that have webs of skin stretched across their spines—have a median number of seven visual opsin genes, whereas most other vertebrates don’t have more than five. For the most part, these encoded opsins are sensitive to blues and greens, which compose the largest part of the aquatic light spectrum.

The team found 13 species that had multiple copies of rod opsin genes, and four deep-sea species that had five or more. In addition to two cone opsin genes, the silver spinyfin had 38 rod opsin genes. Sequencing the animal’s transcriptome suggested that seven of these are expressed in larvae, which live in relatively in shallow waters, and up to 14 are expressed in adults, which live at greater depths—possibly as deep as 2,000 meters.

To better understand their function, the researchers translated four of the spinyfin’s rod opsin genes to proteins and attached them to a chromophore protein as they would normally appear in a retina. They stimulated the photopigments in vitro with light of different wavelengths, finding that the opsins were sensitive to different parts of the light spectrum—which was also confirmed through computational analysis of the opsin genes. Together, the rod opsins covered the entire range of wavelengths the fish are thought to encounter in deep water, including the blue-greens from downwelling daylight and different hues of bioluminescence cast by animals in the deep sea.

“The overall trend of increased opsin diversity is similar to what we are finding for deep-sea crustaceans,” notes Heather Bracken-Grissom, a marine evolutionary biologist at Florida International University who wasn’t involved in the study. In fact, some mantis shrimps have more than 30 opsin genes, and high numbers have been reported for other invertebrates, too. These studies together help challenge a long-held assumption that many deep-sea creatures have less opsin diversity because there is less light there for them to capture, she adds.

Musilova and her colleagues propose several advantages of having greater opsin diversity in the deep sea. Once they are tuned to different windows of the light spectrum—as they are in the silver spinyfin—they could open the potential for color vision. Many vertebrates use cones to discriminate between colors, but rods are more useful for deep-sea organisms, she adds. “The rod cells, they’re sensitive in the lower intensity of light, while the cones are sensitive [only] when there’s enough light around.”

A member of the lanternfish family, Myctophidae. Some species were found to have multiple rod opsins in their retina.
Wen-Sung Chung, University of Queensland

For spinyfins, color vision could come in useful for detecting prey, which the team speculates consists mainly of shrimp that emit bioluminescent light. As for the lanternfish Benthosema glaciale—which has five rod opsin genes, according to the team’s analysis—color vision might be important for recognizing conspecifics, because they sometimes live in mixed schools of several bioluminescent species, Musilova says.

The rod opsin expansion might instead help improve visual acuity as a whole, Warrant points out. Opsins with different light sensitivities could be strategically placed in specific parts of the retina, for instance, which could enhance vision if certain wavelengths of light tend to reach specific parts of the visual field, he suggests.

To test these possibilities, one would have to do careful electrophysiology experiments with recently caught specimens to examine the wiring between rods, and, ideally, conduct behavioral assays to see if they can discriminate between colors, says Ronald Douglas, a visual biologist at City, University of London, who wasn’t involved in the study but has collaborated with one of the coauthors in the past. But most spinyfins researchers get to see turn up dead in fishing nets, often badly deteriorated after hours of being churned around. “[Even] if they are alive, they’re in very bad shape, so you can never do physiological or behavioral experiments. So all you can do when it comes to function is guess,” he says.

“We’re at the edge of our human knowledge about this species,” Musilova says in agreement. Nevertheless, to her the results illustrate the diversity of strategies fish have evolved to survive in the deep sea. Some, such as anglerfish, have evolved a sophisticated symbiosis with bacteria to create a bioluminescent lure to attract prey. Others, including lanternfish, migrate periodically between shallow waters to feed and deeper waters for safety. And it appears that the silver spinyfin’s strategy has been to simply invest in vision: It happens to have one of the thickest retinas among fish species, which consists of several layers of rods, she says. “They might be real masters of vision in the deep sea.”