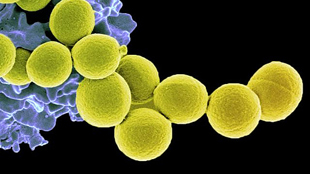 MRSAFLICKR, NIAIDBacterial antibiotic resistance is widespread and presents ongoing challenges in treating infections. A less widely known—but equally challenging—problem is antibiotic tolerance, where bacteria called persisters are not sensitive to antibiotics because the drugs’ targets are inactive in these dormant cells. Kim Lewis’s group at Northeastern University in Boston, Massachusetts, had previously shown that persisters give biofilms their drug-tolerant properties. Now, Lewis and his colleagues have eradicated a biofilm infection with a derivative of the drug acyldepsipeptide called ADEP4, and showed that it activates a protease in persister cells, causing them to self-digest. Their work was published in Nature today (November 13).

“From a treatment perspective or a translational research perspective, [this study is] probably one of the most profoundly important advances that I’ve seen in the field for more than a decade,” said Garth Ehrlich, who is a professor of microbiology and immunology at the...

Based on previous work in actively dividing cells, Lewis’s team predicted that ADEP4 would activate ClpP—a protease that typically identifies and degrades misfolded proteins—in dormant persisters, too. The researchers showed that in a stationary population of methicillin-resistant Staphylococcus aureus (MRSA), treatment with ADEP4 caused widespread, non-specific degradation of proteins, suggesting that activation of ClpP led to the cells’ self-digestion. ADEP4 alone did not kill all bacterial cells, which the authors suggested is likely due to mutations in ClpP that render those cells resistant to the compound. But ClpP mutants were susceptible to other antibiotics, so combinations of ciprofloxacin or rifampicin with ADEP4 led to a decrease in S. aureus to below the level of detection in vitro, in both biofilm and stationary populations.

The ultimate test of ADEP4’s efficacy came when the scientists moved into a mouse model of chronic S. aureus biofilm infection. They showed that ADEP4 and rifampicin together eliminated the biofilm from muscle tissue of the mice to the limit of detection. “It’s a terrific weapon to kill cells,” said Lewis, and “it does an especially good job killing those that conventional antibiotics do not.”

The paper is an “important advance in therapeutics against persistent infections,” said Daniel Wozniak, a professor of microbiology and microbial infection and immunity at Ohio State University, who did not participate in the work. “The concept of exploiting or rewiring a pathway in a bacteria, which is normally meant for normal homeostasis [and] normal cellular biology . . . is a new therapeutic twist,” he added.

“The beauty of this system is it seems to have a mechanism for going directly after the persister population—they basically chew themselves up from within,” explained microbiologist Lynn Hancock, an associate professor of molecular biosciences at Kansas State University, who was not involved in the work. Both hyperactivating a housekeeping gene and using ADEP4 in combination with other antibiotics represents “a really novel way of thinking about treating infection,” he continued.

Work still remains before this treatment reaches the clinic. Lewis explained that ADEP4 seems to work well for gram-positive pathogens like S. aureus, but is too large to penetrate the outer membrane of gram-negative bacteria, like Pseudomonas aeruginosa, which is often responsible for persistent biofilm infections in the lungs of cystic fibrosis patients. Lewis’s group is currently collaborating with a team of chemists to develop and identify other small molecules that could activate proteases in different bacteria and to produce ADEP4 variants with higher solubility and better activity. “There’s room to produce better analogs,” he said.

“An even harder test” of the treatment, and one that Ehrlich would really like to see, “would be to use an animal model [with] an implantable device and see if their therapy can eradicate a biofilm” on an implant, like a screw or an artificial joint, he said. “If they can eradicate that, that’s the holy grail.”

Wozniak pointed out that looking at other antibiotics besides rifampicin in combination with ADEP4 in vivo would be helpful for translating the findings. “In reality, clinicians have few choices to treat tolerant Staph aureus infections,” he said, “so it’d be nice to know how broadly applicable this will be.” He also would like to know how effective ADEP4 is for treating polymicrobial infections.

Despite the remaining challenges, experts believe the team’s findings will still have an impact. Gram-positive pathogens “are a worthy target to go after because those organisms are the leading cause of hospital-associated infection, and they’re often tolerant and resistant to a variety of antibiotics,” Hancock said. “Coming up with new ways and strategies to treat them is . . . a cool thing.”

“Over the past 15 years or so, we’ve established that most of these chronic infections are biofilms,” said Ehrlich. “For the first time, with this paper, we’re getting close to developing treatments. It certainly looks hopeful.”