Researchers at MIT have engineered Escherichia coli and human cells such that they can record multiple molecular events as well as the time and order in which they happen. The approach, which they describe in Molecular Cell today (August 22), incorporates base editing technology and essentially exploits DNA’s coding capacity for the storage, retrieval, and processing of specific user-defined information.

“This is a very clever use of base editing for reading [and] writing information inside of living cells,” biological engineer Randall Platt of the Swiss Federal Institute of Technology in Zurich writes in an email to The Scientist. “Their system seems robust and powerful and will open up doors for applications in DNA writing such as molecular recording and synthetic biology more generally.”

Turning cells into molecular recorders—meaning they are genetically programmed to make permanent alterations in their DNA in response to particular molecular events—has a number of potential biotechnological and biomedical applications. Bacterial cells in soil or water, for example, could be used to detect and record the presence of environmental toxins, pesticides, and more, while mammalian cells in an animal could be used to track events during the development of a disease or the progression of a physiological process, says Timothy Lu, a biological engineer at MIT who led the study.

Previous molecular recording technologies have used CRISPR enzymes or recombinases to insert, flip, or mutate particular DNA segments, but Lu and colleagues have now used a CRISPR-related technique called base editing to make single base-pair changes. The smaller and more precise mutations mean there is a greater capacity for information storage and that the changes themselves can be “read” as instructions for further downstream functions, says Reza Kalhor, who studies molecular recording at Harvard University’s Wyss Institute and who was not involved in the work. Base editing “is a scalpel of a tool,” he adds.

In Lu and colleagues’ new system, the basic units of operation are two types of genetic sequence: one encoding a specific guide RNA (gRNA) under the control of an inducible promoter—the inducer being whatever molecular event the user wants etched in the DNA—and one encoding a base-editing enzyme fused to a nuclease-free CRISPR-Cas9 enzyme (to which the gRNA binds). The genetic sequences are transfected into cells and when those cells are exposed to the inducer, the gRNA sequence is expressed, the RNA binds to the Cas9-base editor fusion protein, and then transports it to the target DNA sequence (a match for the gRNA) for editing. The edits, or recordings, can be later analyzed by DNA sequencing.

In its simplest format the system can be used to mutate a target site in response to a chosen environmental signal, but the system can also be easily and vastly expanded, says Lu. For example, a selection of gRNAs, each driven by a particular inducer, could be used to record multiple signals at once. Moreover, gRNAs can be designed to recognize target DNA sequences only after modification by other gRNA-driven edits. “You can engineer CRISPR guide RNAs in such a way that you have to have edit one happen before edit two can happen, before edit three,” explains Lu. “It’s why we called the system DOMINO,” which stands for DNA-based Ordered Memory and Iteration Network Operator. This edit-dependent action can be used to determine the order and even timing of multiple signals.

To determine timing, arrays of repeated target sequences can be arranged in the cell’s DNA in such a way that, initially, recruitment of the base editor is only possible to the first target (only this one has exactly the correct sequence). This first act of editor recruitment creates the necessary base change in the adjacent target, which the editor overlaps, to enable that target’s recognition and the necessary base change in the following target, and so on. The passing of time is recorded as the number of edits accumulated along the array. Having arrays of targets for one inducer followed by targets for a second, allows both time and order to be recorded. The team demonstrates the feasibility of these various approaches in sets of experiments with E. coli and human cells.

Although the experiments so far were proofs-of-principle, “It is exciting to think about the possible applications for such programming of sophisticated condition-specific DNA changes that result in persistent outcomes,” bioengineer Adam Arkin of the University of California, Berkeley, writes in an email to The Scientist.

“The next step for this research and the innovation described here is to translate it into recording biological signals of relevance and of importance,” adds Kalhor. 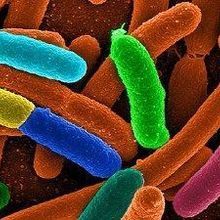