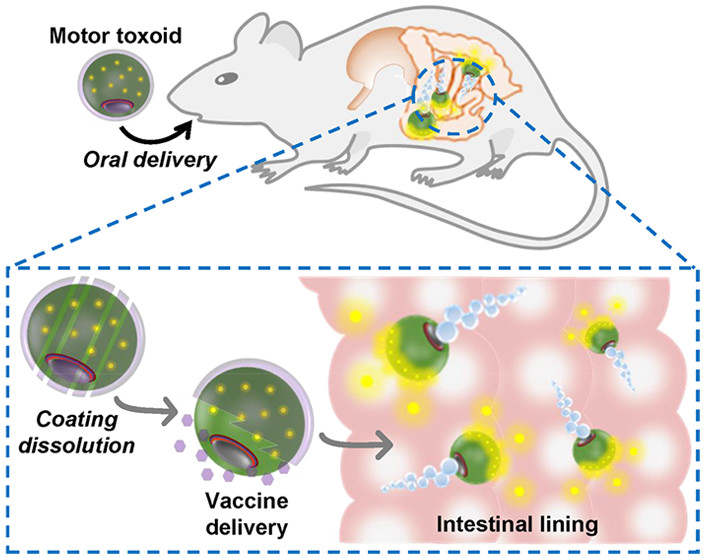 A new type of vaccine vehicle—this one literally has a teeny tiny motor—can drive itself to the mucosal linings of mouse intestines, potentially allowing for broader protection against infection, according to a study last week in Nano Letters.

Nanoengineers Liangfang Zhang and Joseph Wang at the University of California, San Diego, teamed up to design an ingestible device that can navigate the digestive system of rodents, stick itself to the mucosal lining of the gut, and deliver its payload. Aside from obviating the need for shots, the team says, the motorized vaccine may have another crucial benefit: its ability to build mucosal...

Mucosal immunity is our body’s “first line of defense,” says David Lo, a biomedical scientist at the University of California, Riverside, who has studied vaccines and mucosal immunity. “Yet, there are almost no vaccines that we have on the market that actually try to induce this kind of response. It just tells you how primitive vaccine development is.”

To get a vaccine straight to the mucous membrane of the intestine, the scientists wanted to create a motorized device that could actively deliver the immunization, rather than wait for it to passively travel through the body. So they created a tiny, self-propelling gadget designed to carry a bacterial pathogen, Staphylococcus aureus, which is responsible for dangerous, antibiotic-resistant infections and currently has no vaccine. They started with micromotors made of magnesium and covered in a layer of titanium dioxide with a small hole on one side that left the magnesium exposed. They coated this motor in red blood cell membranes expressing the pathogen. Another coating helped the device stick to the walls of the intestine, and one more protected it from the acidic environment of the stomach. All together, the machine is the size of a pea.

Once the device passes through the stomach, the protective coating dissolves and the now-exposed magnesium motor converts water in the body to hydrogen bubbles that escape through the hole in the titanium dioxide, propelling the device—and the bacterium—toward the wall of the intestine. There, it sticks and generates a mucosal immune response.

“This motor, the way we designed it, is ingestible. . . . It will automatically degrade by itself in the GI tract, leaving nothing toxic behind,” says Zhang. “It’s more like food.”

First, they tested the apparatus in cells in vitro, then the team conducted experiments in mice. After feeding the device to the animals, the researchers used imaging techniques and fecal analysis to estimate the intensity of the animal’s immune response. Those that had received the vaccine using the micromotor showed signs of a significantly greater immune response than those that had ingested a pill without the hole that causes the device to propel itself.

Lo says the device does everything it was “supposed to do,” but, of course, there is a long way to go to show it is the best way to deliver certain vaccines.

The group is now working to test the system in animal models to see if this increased immune response translates to disease prevention.

The concept of so-called digestible injectables is gaining momentum in other fields of medicine. On the same day last week, researchers described in Science a pill that travels through the digestive system until it is activated in the stomach. There, it sticks to the stomach lining thanks to a specialized, turtle-shell–like shape while a tiny pin prick delivers insulin. It successfully injected the drug in both pigs and rats.

The team’s goal was not just to deliver insulin, but to create “a device that could engage with tissue in a predictable and reliable fashion every single time, and so for that, we needed a device that could self-orient and align with the tissue,” says Carlo Giovanni Traverso, a physician at Brigham and Women’s Hospital and a coauthor on the study.

Traverso says he hopes the insulin pill could be used to deliver all kinds of biologics and gene therapies. And Wong and Zhang believe their micromotor device could eventually be adapted to treat cancers found in the intestines. “What is exciting about this is it adds a very dynamic and active component that human beings never thought of before,” says Zhang. “There’s more and more labs looking into nano- and micro-scale devices, and the use of these devices for active medical applications instead of just focusing on the more conventional way of delivering drugs.”

Correction (February 18): The insulin device is activated in the stomach lining, not the intestines as we mistakenly reported. And it was tested in rats, not dogs. The Scientist regrets the error.