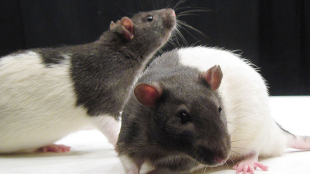 WIKIMEDIA, JASON SNYDERAbout a decade ago, a laboratory technician approached Daniel Weary with concerns about the way she was asked to put down animals. As was—and is—widely practiced across North America and around the globe, the lab tech would place rodents in a chamber and pipe in carbon dioxide (CO2) at increasing concentrations until the animals passed out and then died. “It’s not the best part of the job, killing animals,” Weary, who studies the welfare of dairy cows at the University of British Columbia, told The Scientist. “It’s a hard part of being a lab technician.”

Although some rodents stop moving upon exposure to CO2, others seem to become stressed. They might rear up, paw the sides of the box, or emit ultrasonic vocalizations. It seemed to the tech that the animals were suffering before losing consciousness. Her worries about the animals’ welfare...

“There is compelling evidence that carbon dioxide is not good for the welfare of these animals that are killed with it,” said Huw Golledge, the senior scientific program manager for both the Universities Federation for Animal Welfare and the Humane Slaughter Association in the U.K.

Golledge, Weary, and others are speaking in Illinois this week (November 4) at an American Veterinary Medical Foundation (AVMA) meeting focused on improving animal euthanasia procedures. “I think we need to look for the perfect way to kill rodents because we haven’t found that yet,” Golledge told The Scientist. Still, a slow change has been occurring in refining the ways rodents are killed, especially regarding CO2 administration.

It’s been known that at high concentrations, CO2 causes animals pain. Upon contacting mucosal surfaces, it turns into carbonic acid, which stings. Additionally, in humans, even low concentrations can be stressful, causing shortness of breath.

“Current protocols promoted are ones in which there’s a slow-fill method of euthanasia and to ensure animals don’t experience stress before they become unconscious,” said Patricia Turner, the program leader for laboratory animal science and a pathobiology professor at the University of Guelph in Ontario, Canada. The concentration of CO2 is very low at the beginning, Turner explained. “Then the flow rate of gas can be turned up once the animal is unconscious to speed the process of death,” she added. This procedure is one of a number considered acceptable, with certain conditions, by the AVMA, which sets the guidelines for euthanasia in the U.S. (The AVMA did not accommodate The Scientist’s requests for an interview.)

But the Canadian Council for Animal Care (CCAC), which issues euthanasia guidelines for Canadian labs, is less accepting of the CO2-alone approach. According to the CCAC’s 2010 guidelines for euthanasia of animals used in science, “CO2 should not be used as a sole agent of euthanasia where other methods can be practically employed.” Instead, the CCAC recommends using an inhaled anesthetic first, noting that CO2 alone is “conditionally acceptable” if it is scientifically justified. In an e-mail to The Scientist, Gilly Griffin, the director of standards at CCAC, said that “where practical [CCAC-certified institutions] are anesthetizing rodents prior to the use of CO2.” How the CCAC’s guidelines compare to those of the AVMA and other groups is going to be addressed at this week’s meeting, she added.

The CCAC recommendations cite a number of studies, including a series of experiments by Weary and colleagues, suggesting that anesthetizing rodents before killing them with CO2 might cause the animals less distress and pain. Weary’s team tested this by offering mice and rats an irresistible treat—Honey Nut Cheerios—that was available to them in a part of their chamber. The catch was that either CO2 or an anesthetic gas was piped into the chamber with the Cheerios. The animals could choose to eat the treat in the presence of the gas, or avoid the gas in another section of the chamber but also forego the sweetened cereal. Weary’s goal was to find gas to render them unconscious that would be so mild that the animals would slowly fall asleep as they were munching on Cheerios.

Unfortunately, nothing worked. At roughly 12 percent CO2, the animals abandoned the food1 and headed for the normal-air chamber well before they could be rendered unconsciousness (it takes about 40 percent CO2 to knock them out). “CO2 was consistently aversive,” said Weary. However, exposing the rodents to an anesthetic appeared to be less aversive2—the animals would spend a longer amount of time in the anesthetic-filled chamber eating the Cheerios.

In another experimental set-up, Weary tested what concentration of CO2 or anesthetic would make the rodents leave a darkened part of their chamber3 (which they typically prefer) for a well-lit area with normal air. “About half the time with isoflurane [anesthesia] they just won’t leave,” he said. “They prefer to stay on the dark side with isoflurane instead of going to the light side.”

Weary said the “evidence is extremely strong” to support recommending some form of anesthesia before killing a rat or mouse with CO2. “I have a very, very high level of confidence in that particular result.”

In 2012, Weary’s own institution adopted a policy of administering anesthesia before exposing rodents to CO2. And over the past year, McGill University began to implement a policy of exposing rodents to inhaled isoflurane before CO2. “We’re still phasing it in,” said Jim Gourdon, the director of the Animal Resources Centre at McGill. “We took the decision to move on based on . . . the interpretation of research evidence that was published and based on personal observations,” he said. Within the next few weeks, all of the laboratories at McGill for which the protocol is appropriate will begin administering isoflurane before CO2.

“There is a trend that people are becoming aware that there’s a concern about carbon dioxide and they’re trying to avoid it,” said Golledge. “The evidence that there are problems with carbon dioxide is almost irrefutable.”

Still, not every institution has jumped on board. Christian Newcomer, the executive director of the Association for Assessment and Accreditation of Laboratory Animal Care International (AAALAC), said that while the facilities his organization accredits are interested in improving euthanasia procedures, he has not observed many of them instituting protocols that include anesthesia before CO2. That’s because there’s not a general acceptance that the data are unequivocal in favor of anesthesia. “There’s still not a consensus,” said Turner.

Another concern is that anesthesia itself may be aversive; Golledge said evidence suggests that animals exposed to isoflurane in the past are much more sensitive to it than naïve animals. This had led some to question the benefit of adding isoflurane to euthanasia procedures.

For labs that don’t already use inhaled anesthesia, there is an extra cost to installing the infrastructure and training the staff on how to safely administer it. Gourdon said the investment in equipment and training to implement the new policy at McGill has been minimal, and will have been well worth it if animal welfare is improved.

As for the lack of consensus on whether anesthesia is making a measureable improvement in the end of lab rats’ lives, Gourdon noted that several questions remain.

Even so, “in doubt,” he said, “let’s lean toward animal welfare.”

Correction (November 5): Isoflurane was misspelled in the original version of this article. The Scientist regrets the error.