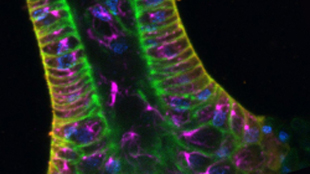 A simple slime mold may not be as dissimilar from complex multicellular creatures as previously assumed. When the single-celled organisms come together to form a...

Newborn neurons migrate throughout the brain with the help of a transcription factor, Ascl1, which regulates Rnd3, a GTPase that activates the actin cytoskeleton. Rnd3 is also involved in cell division, supporting the emerging concept that common pathways are used for multiple purposes in neuronal development.

In a review of the state of research, developmental biologist Peter Lawrence argues that current research is in crisis, and young scientists are suffering. Evaluators call the review "controversial," but say "the solutions really lie in our hands, making this a must-read for everyone."

Two proposed mechanisms of vulval patterning in Caenorhabditis are not mutually exclusive: According to a computational model, variation in the interaction of two pathways can result in one of two different modes of cell patterning: sequential (cascade) signaling or a morphogen gradient, resolving a classical debate about vulval cell fate.

Contraction forces between individual cells correlate directly with the forces between cells and the extracellular network (ECM), and remain stable regardless of significant changes in the shape and length of cell-cell contacts.

The F1000 Top 7 is a snapshot of the highest ranked articles from a 30-day period on Faculty of 1000 Developmental Biology, as calculated on May 5, 2011. Faculty Members evaluate and rate the most important papers in their field. To see the latest rankings, search the database, and read daily evaluations, visit http://f1000.com.