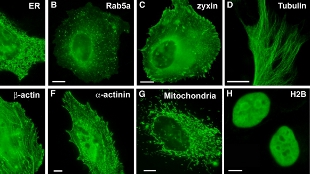 A new, genetically-encoded fluorescent protein created in the lab of Roger Tsien, who shared a Nobel Prize for developing green fluorescent protein (GFP), is poised to revolutionize electron microscopy. Engineered from an Arabidopsis protein, "miniSOG" (for mini Singlet Oxygen Generator) is less than half the size of GFP, binds to a suite of well-characterized proteins, and can faithfully tag a variety of mammalian cells as well as cell in intact rodents and nematodes.

Using a technique called parallel metabolic pulse labeling, researchers measured mRNA and protein abundance and turnover for more than 5,000 mammalian genes, thus generating the first ever genome-scale predictions of mRNA and protein synthesis rates. The results suggest that the abundance of proteins in a cell is primarily controlled at the translational level.

Smad proteins, which regulate the transcription of specific genes and play a role in the post-transcriptional induction of a suite of microRNAs, perform their functions in mysterious ways. But now, researchers have uncovered a molecular mechanism for how they regulate specific microRNAs—by binding to a consensus sequence shared by many of the RNAs involved.

5. The dance of DNA fixers

For the first time, the crystal structure of a complex of proteins comprising Mre11 and Rad50, which are involved in the detection and repair of DNA double strand breaks, has been revealed.

When oncogenes are activated, cells respond by ramping up their DNA damage response (DDR) and going into a state of senescence, most likely as a form of tumor suppression. But as they fill up with heterochromatin, which accumulates with replicative stress, and they switch off the DDR to stay viable. Researchers have found that the ATR (ataxia telangiectasia and Rad3-related) kinase pathway, which mediates heterochromatin production, is key to this switch, a piece of knowledge that could be used to treat some types of cancer.

Cells of most complex organisms have the ability to essentially reset their age, by dividing into gametes that will combine to make a new organism. Now researchers have pinned down at least one of the molecular components—the NDT80 gene of yeast—that makes this possible. Transient expression of NDT80 in yeast cells that weren't undergoing gametogenesis could also reset their life span.

The F1000 Top 7 is a snapshot of the highest ranked articles from a 30-day period on Faculty of 1000 in genomics, genetics, and related areas, as calculated on July 15, 2011. Faculty Members evaluate and rate the most important papers in their field. To see the latest rankings, search the database, and read daily evaluations, visit http://f1000.com.

Correction (July 20): The original version of this list incorrectly stated that the Schwanhäusser et al. study (#3) suggested that protein abundance was controlled at the transcriptional level. this should have read "translational level." The mistake has been corrected, and The Scientist regrets the error.