ABOVE: A mockup of the at-home test currently under development by Mammoth Biosciences and GlaxoSmithKline
MAMMOTH BIOSCIENCES

In late January, as the COVID-19 pandemic was gaining steam, Charles Chiu, a researcher at the University of California, San Francisco, reached out to colleagues at San Francisco–based biotech Mammoth Biosciences. Chiu’s group and the team at Mammoth had already collaborated on developing a CRISPR-based diagnostic test for Lyme disease, which they thought would easily translate to SARS-CoV-2 detection, he says.

“The CRISPR system allows you to target pathogens very precisely,” Chiu, who is part of Mammoth’s scientific advisory board, tells The Scientist. “Within two to three weeks, we were able to go from just designing the assay to actually getting it to work and demonstrating that we can use it to rapidly identify or potentially diagnose SARS-CoV-2 from clinical samples.”

The gold standard for detecting a virus such as SARS-CoV-2 is reverse transcription PCR, which requires isolation of RNA from a sample followed by the conversion of RNA to DNA and subsequent PCR to amplify any viral nucleic acids. While sensitive, this type of test requires collection of a specimen, such as saliva or a nasal swab, and the transport of that sample to a clinical lab for processing. Earlier in the year, reagents for this type of test were in short supply.

The new assay developed by Chiu and colleagues is called SARS-CoV-2 DETECTR (for SARS-CoV-2 DNA endonuclease-targeted CRISPR trans reporter); researchers published details about how it works in Nature Biotechnology on April 16. The test is fast: after RNA extraction, it takes less than an hour to get a result. And it uses loop-mediated amplification (LAMP), which takes place at just one temperature, rather than the cycling temperatures necessary for PCR, meaning an expensive thermocycler is not required.

The enzyme most commonly used for CRISPR genetic modification is Cas9, which, guided by a short RNA sequence, finds and cleaves a nucleic acid target. DETECTR uses a different enzyme, Cas12, which also follows a guide RNA to its target—in this case, SARS-CoV-2 sequences—but cleaves more than just its target; it also starts chopping up nearby nucleic acids. The assay includes a reporter molecule that, when it gets cleaved by Cas12 during the cutting frenzy precipitated by SARS-CoV-2 nucleic acid recognition, can be visualized on a test strip, similar to a home pregnancy test.

In their paper, the authors reported that the sensitivity of DETECTR was comparable to a reverse transcription PCR assay run in a clinical lab on about 80 patient samples. On July 9, the assay was given emergency use authorization (EUA) by the US Food and Drug Administration (FDA), only for use at the University of California, San Francisco’s clinical lab. Since then, the developers have continued to focus on making the test more accessible and easier to use.

In the iteration that was approved for EUA, there’s still an RNA extraction step, Chiu explains. That’s a possible issue because “there was a shortage of extraction reagents just a month or two ago, and it’s also limited by the fact that extractions typically take anywhere from a half an hour to an hour, so . . . we ended up modifying this test so that we can actually run the LAMP reaction directly from [an] original sample.”

On May 20, Mammoth Biosciences established a partnership with pharmaceutical company GlaxoSmithKline Consumer Healthcare to further develop DETECTR into a handheld, disposable device that would be appropriate for home use and be about as expensive as an at-home pregnancy test.

“The way point-of-need and at-home diagnostics will work is if they’re truly all-in-one,” says Trevor Martin, Mammoth Biosciences’s CEO. “It needs to be as easy to use as a pregnancy test, and we’re also very much believers that it needs to give you results that are as trusted and accurate as something you would get in the lab.”

Since the COVID-19 pandemic started to take off in the US in March, testing has largely focused on people who already have symptoms, partly because resources are limited. The trouble is, it seems as though the virus is most contagious around the time of symptom onset, meaning that if people are waiting to quarantine or take other protective measures until they get a positive result, they may have already infected others.

Testing at the earliest stage of symptoms “is useful from an epidemiological perspective to understand how COVID impacts patients,” says Rahul Dhanda, the CEO of Sherlock Biosciences, a Cambridge, Massachusetts–based biotech that develops diagnostics and is now focusing on SARS-CoV-2. “But in terms of prevention and tracking the history of disease, what you want to do is test people who are asymptomatic.”

Toward the goal of catching more cases before they spread and avoiding supply chain issues, a number of biotechs and academic labs are devising new strategies and exploiting existing technology to make testing simpler and available in settings other than doctors’ offices and clinical labs.

In a study published in PLOS Pathogens on August 27, for instance, a group based in China described a test that relies on RNA extraction that they call CRISPR-COVID. Their assay leverages Cas13a, an enzyme that behaves similarly to Cas12 to cleave a single-stranded reporter that fluoresces when SARS-CoV-2 RNA is present, and another type of isothermal (constant temperature) amplification, reverse transcription recombinase polymerase amplification. In the study, the authors estimate the cost of one CRISPR-COVID test at about $3.50, but predict it could be as low as $0.70 if the reagents were purchased in bulk. The current version is most appropriate for the lab, as it requires an RNA extraction step and specialized equipment to pick up fluorescent signals.

The fact that you can do a molecular diagnostic test in the palm of your hands is something that has never been possible before.

In a study published August 31 in PNAS, researchers developed a test that uses LAMP directly on patient samples and detects SARS-CoV-2 with a microfluidic cartridge and portable smartphone-based reader. Because it does not require RNA extraction or PCR amplification, “this approach could enable the scalable deployment of COVID-19 diagnostics without laboratory-grade infrastructure and resources, especially in settings where diagnosis is required at the point of collection, such as schools, facilities that care for the elderly or disabled, or sporting events,” the authors write.

The current pandemic is not the first time LAMP has been developed for diagnosing viral infections. Because of its portability, it’s been deployed in Ebola and Zika outbreaks. But the technology is not without drawbacks. “There are a couple of problems with isothermal amplification,” cautions Max Wilson, a biologist at the University of California, Santa Barbara (UCSB). Wilson has developed a COVID-19 test in use at UCSB that uses CRISPR for detection and PCR for amplification. “In our hands . . . [LAMP] is less sensitive than other amplification methods,” he explains.

Another problem is that if everyone starts using LAMP, the reagents, which aren’t made at volumes supportive of pandemic-scale testing, could become harder to get, Wilson says. “The production has not been streamlined and optimized.”

Despite these and other issues, “there are a lot of really promising and complementary testing frameworks” out there, he adds. All of the various approaches—at-home testing, lab-based testing of samples taken at healthcare facilities, and assays that could be used to test thousands of people daily, such as in public health departments or at big universities—“don’t even compete for resources or manufacturing capability,” Wilson says, “and they’re all necessary.”

“There’s a huge amount of unmet need” when it comes to COVID-19 testing, Martin agrees. “We just need all hands on deck.”

Starting in mid-March, Dhanda and his team at Sherlock Biosciences pivoted their entire research program to focus on developing a CRISPR-based COVID-19 test kit using their platform SHERLOCK, which stands for specific high sensitivity enzymatic reporter unlocking. On May 6, that kit granted EUA and is now distributed in the US through a collaboration with Integrated DNA Technologies.

Because that test still includes a lot of steps, most of which are best performed in a lab, the researchers are now also working on a room-temperature, instrument-free test, the output of which can be visualized on a paper strip. That technology, which is called INSPECTR for internal splint-pairing expression cassette translation reaction, was originally developed at the Wyss Institute at Harvard University and relies on hybridization of a sample, such as saliva, to freeze-dried synthetic DNA complementary to SARS-CoV-2 RNA. If the sample contains viral RNA, a reporter protein is activated and then can be visualized with the naked eye, making the test a great option for eventual home use. 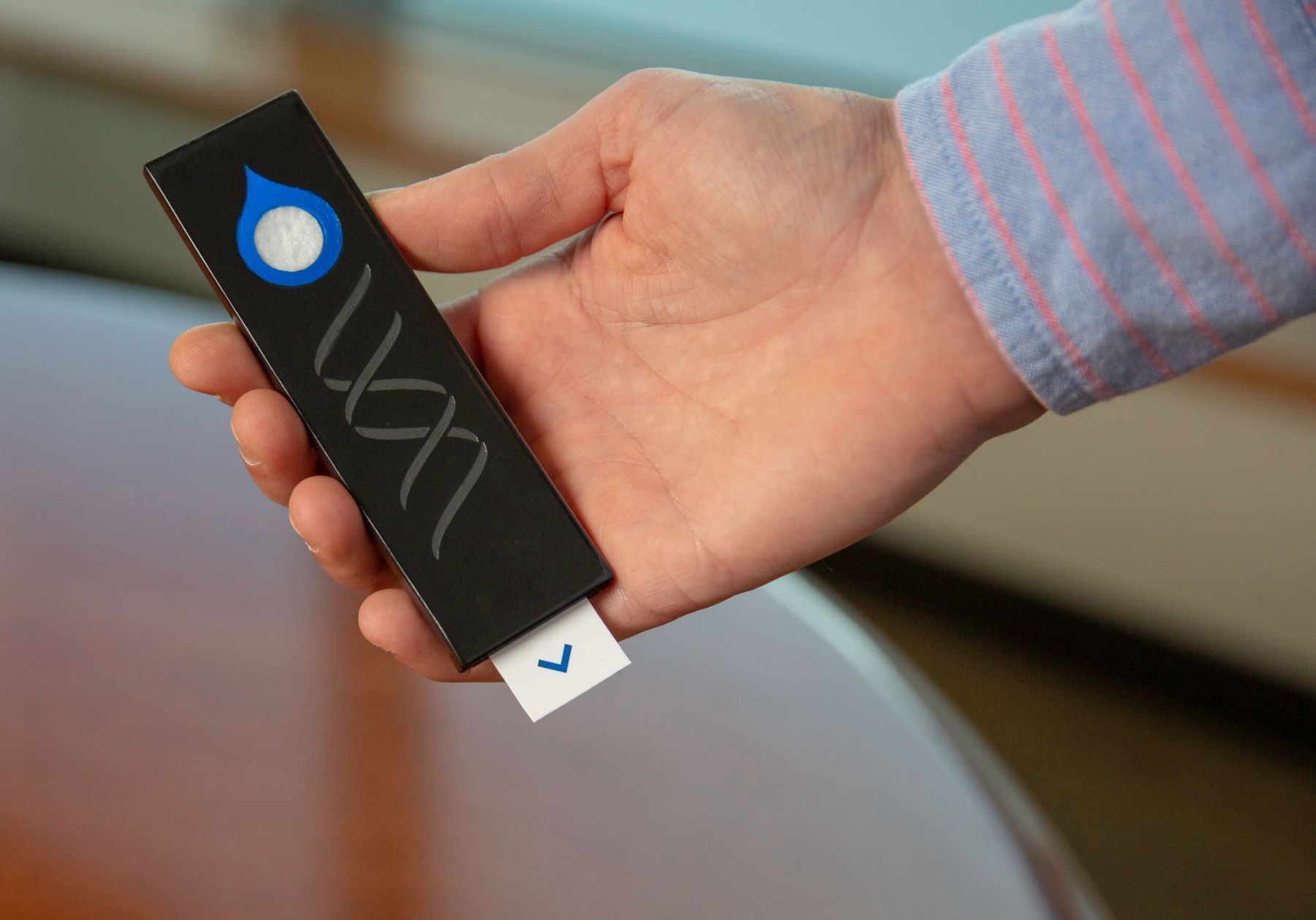 A design concept of INSPECTR
Wyss Institute at Harvard University

“The fact that you can do a molecular diagnostic test in the palm of your hands is something that has never been possible before,” says Dhanda, who adds that they are planning to apply for an EUA once development is finished, probably early next year. How much it will cost hasn’t been disclosed, but a company representative tells The Scientist that Sherlock is committed to making the test accessible.

In a study published in Science Advances on August 25, a group of researchers led by University of Albany biomedical engineer Ken Halvorsen also used a synthetic DNA approach to detect viral RNA, both from Zika virus and from SARS-CoV-2. The authors created DNA nanoswitches, small bits of DNA that change their shape in response to binding a target sequence. Because of the shape change, samples that contain viral RNA look different when run during gel electrophoresis than do samples without virus.

“We can use this approach to detect viruses at levels that are relevant for health,” Halvorsen says. The group is now “trying to figure out how we can do a workflow that will allow us to do the whole thing outside of a lab.” Because the test can be performed without enzymes, it already lends itself to streamlining, and they plan to simplify the readout, possibly using some type of cartridge that could be preconstructed, portable, and disposable. “We’re hoping to get the whole process down to under an hour,” he tells The Scientist.

As for competition, “I don’t think that the testing for coronavirus is going to be a winner-take-all situation,” Halvorsen says. “There really need to be lots of different options. And it may turn out that there are many different testing types that all work in different situations,” he adds. “This may not be a short-term problem. We may be testing for years.”

See “U of Illinois Returns to School with 20,000 Saliva Tests Per Day”