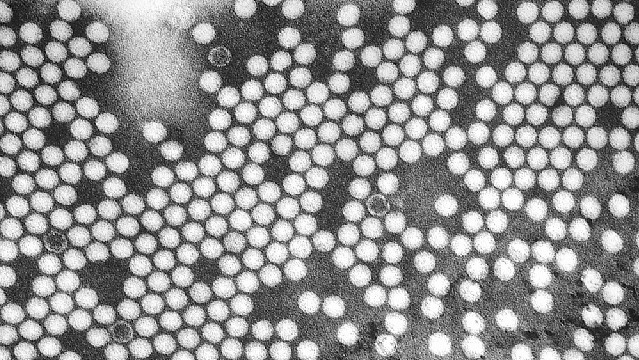 Electron micrograph of poliovirusWIKIMEDIA, CDCIn September, the Global Polio Eradication Initiative (GPEI) declared type 2 poliovirus eradicated. This long-awaited statement officially confirmed what polio researchers and global public health officials had known for more than a decade: one of the triumvirate of polioviruses was no longer a threat. The last case of type 2 poliovirus was diagnosed in Northern India in 1999.

The announcement also set in motion a critical component of the GPEI’s Poliovirus Eradication Endgame Strategic Plan. Among other things, public health officials are planning to stop using oral polio vaccine against type 2 poliovirus in April 2016. To reduce risk of accidental release, all laboratories that stock type 2 poliovirus—both the wild-type and vaccine virus—will need to destroy the virus soon after that date, or adopt stricter standards for handling it.

This transition for handling laboratory stocks of type 2 poliovirus will likely be a dress rehearsal for eradication of all types of poliovirus—something that may occur before the decade is out. One cost of this progress, though, will likely be halting nearly all basic research into poliovirus as most academic researchers are unlikely to have the funding to upgrade their containment facilities.

Currently, there are about 500 laboratories working with type 2 poliovirus worldwide. After the new requirements go into effect, there will be around 50 facilities—including both laboratories and vaccine manufacturers—according to Nicoletta Previsani, polio containment coordinator at the World Health Organization (WHO). This reduction of stored samples will require a huge coordinated effort on the part of laboratories and other facilities holding type 2 poliovirus, as well as on the parts of national certification boards charged with ensuring the virus is properly handled by any remaining facilities in each country.

“There are two steps to containment,” said Previsani. First, “reducing the number of those facilities [handling type 2 poliovirus].” The second, she added, is ensuring that “poliovirus essential facilities—who are tasked with maintaining stocks of virus—really implement those [containment] measures.”

Worldwide, the number of cases of polio infection dropped dramatically after vaccines were developed in the 1950s. In 1988, a decade after the last smallpox case, the WHO unveiled its plan to eradicate polio. The effort, steered by the GPEI, has hit roadblocks in the past, but now appears poised to reach its target of eradication by 2018. Polio now only circulates in Afghanistan and Pakistan. (Nigeria was officially declared polio-free earlier this year.) Health officials haven’t seen type 3 cases since 2012, but it will take a few years to verify that this pathogen is no longer circulating.

This year, there have only been 52 reported cases of polio—a record low. Meantime, health officials called for the removal of type 2 poliovirus from the oral vaccine. Within months of this switch, only laboratories doing crucial poliovirus work will be allowed to maintain stocks of type 2 poliovirus. All others will need to destroy their samples. Essential facilities will also need to meet strict requirements. In the U.S., this will mean poliovirus will move from a biosafety level 2 (BSL2)—a designation meant for mild or hard-to-contract diseases—to BSL 3—meant for serious or potentially lethal diseases.

The WHO has developed a 16-point biosafety management plan for labs that will continue to handle the virus. Its strategy calls for containment facilities to be limited to regions where polio vaccination levels are high, to prevent human infections in case the virus is accidentally released. Containment facilities also need to be in areas with sewage systems that are not open to the environment and have the capacity to properly treat effluent, according to the WHO.

Even among countries that meet all these requirements, few are ready to make those changes quickly and have the regulatory infrastructure in place to certify that labs and facilities are following guidelines, said Previsani. “In general, everyone’s late. The discussions are really only just starting, so containment will be addressed in terms of interim measures for next year.”

Another challenge will be overseeing labs that store polio-contaminated specimens, such as frozen stool samples collected to study cholera or rotavirus. “They may not realize the samples are contaminated, so the effort needs to reach out to these people,” said Previsani. “Those poliovirus contaminations may not mean much in terms of eradication program, but they may be asked to destroy them [the samples] or contain them.”

One consequence of eliminating nearly all type 2 poliovirus is that it will slow research down.

“There’s a tension between stopping work [on poliovirus] and doing enough work to make sure eradication continues,” said Philip Minor, head of virology at the National Institute for Biological Standards and Control in the U.K., who was part of the team that drafted the current polio eradication plan. “You do need to strike the right balance . . . making sure you don’t stop work that really matters for the endgame.”

Take, for example, work being done in Raul Andino’s lab. Andino, a virologist at the University of California, San Francisco, and his colleagues are developing a new oral polio vaccine. But the new containment requirements could mean the team won’t be able to progress its candidate to clinical trials. If polio is eradicated on schedule, this candidate vaccine would essentially serve as an emergency backup. But if GPEI misses its target, a novel vaccine may be a useful tool in the next stages of eradication. “The question is, do you need to work with type 2 in order to develop new vaccines, new drugs, new diagnostic tools?” he said. “It’s really a cat-and-mouse type of race: Do you do more research or . . . close your eyes and hope for the best?”

“It’s a very wise idea to document who has this virus. It’s something that has to be done,” Andino continued. But more-stringent biosafety regulations could mean the end of poliovirus research in academic labs. “I can tell you that it will kill the field,” he said.

“There’s a growing sense in picornavirus community that all research on poliovirus should not stop. We should maintain some research,” said Kurt Gustin, a virologist at the University of Arizona College of Medicine in Phoenix who studies host-pathogen interactions. “One virus isn’t equal to another virus,” he said. “They take advantage to other machinery and all do it in interesting and unique ways. Simply studying other viruses won’t tell us how poliovirus and closely related viruses do their job.”

Gustin’s group is currently working only with poliovirus types 1 and 3, so the team won’t be affected by the impending regulations. But the virologist is thinking ahead to when other types of poliovirus are eradicated. “Based on the surveillance we’re seeing, I’m taking it a lot more seriously than I was three years ago,” said Gustin. “It’s at the forefront of thoughts more often.”

Some polio researchers may choose to work on different viruses, said Esther Bullitt, a virologist at Boston University who studies proteins involved in poliovirus replication. Bullitt told The Scientist she, herself, has considered doing so.

“Eradication would be awesomely great,” she said. “It’s absolutely something to look forward to.” Even if it means a significant shift in her own research, added Bulllitt, “the fact that poliovirus will be eradicated will be worth what it takes to make that happen.”