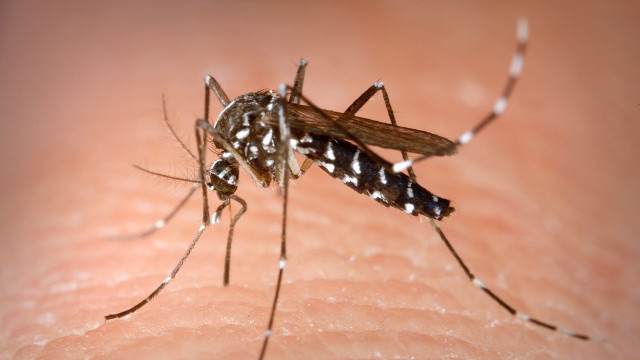 Aedes albopictusCDC, JAMES GATHANYSince its discovery in Africa in the 1950s, chikungunya virus has traveled around the Indian Ocean region, infecting tens of millions of people. Those affected suffer high fevers, rashes, and intensely painful arthritis that lasts for weeks.

Now, chikungunya virus has arrived in the Western hemisphere, with locally transmitted infections recorded since December 2013 on the Caribbean island of St. Martin. Within six short months, more than 100,000 suspected infections have been found in 17 countries of the Caribbean and South America, according to the US Centers for Disease Control and Prevention (CDC).

Originally, yellow fever mosquitoes (Aedes aegypti) transmitted this RNA virus to people. In 2006, however, chikungunya virus linked up with Asian tiger mosquitoes (Aedes albopictus) on the tiny island of La Réunion, east of Madagascar. The encounter selected for viruses with a single change in the E1...

Mutations occur frequently in RNA viruses like chikungunya, which have high error rates during replication that ensure their adaptability. Might this particular change have been predicted? And could changes that further improve viral fitness be forecast in time to be useful for surveillance and interventions? Two new reports ask these and other questions about chikungunya’s past, present, and future.

“These are very important studies, both of them, because they give us a better understanding of the basic biology of these viruses, and how they interact with their mosquito vectors,” said CDC’s Ann Powers, a researcher within the agency’s Division of Vector-Borne Diseases.

Writing in Cell Host & Microbe this month (June 11), a team led by Marco Vignuzzi at the Pasteur Institute in Paris used mosquito and mouse infections to recapitulate chikungunya’s genetic history in less than a month. “We’re asking the mosquito to show us immediately what it can do, and what the virus wants to do in that context,” Vignuzzi told The Scientist.

The team infected A. aegypti or A. albopictus mosquitoes with an older A226 chikungunya virus, then sequenced the E1 gene derived from mosquito body and saliva samples obtained after 10 days. The sequences recovered from A. aegypti saliva were similar to those in the input viruses. In contrast, the use of deep-sequencing allowed researchers to readily detect variant viruses with a single change, again from alanine to valine (226V) from A. albopictus saliva, but not from A. albopictus bodies, highlighting the importance of assessing different sites of the infected mosquitoes.

To look for new mutations, researchers then infected both types of mosquitoes with a 226V variant virus. In the saliva of both, they found viruses with changes in other E1 glycoprotein residues, V80I and A129V. Remarkably, performing an expanded version of this experiment on mice yielded similar results after only one infection cycle: infected mosquitoes developed and transmitted double-mutant viruses to mice, which then transmitted the variants to naive mosquitoes in high frequencies. In some cases, the new variants displaced the old during the course of the experiment.

Further studies suggested that these mutations are valuable to chikungunya virus because they improve its growth in A. albopictus, increase virulence, improve fusion activity, and improve its stability in saliva.

To test whether these changes improved the virus’s fitness, the researchers engineered a large panel of representative viruses with various combinations of mutations, and infected A. albopictus mosquitoes with 1:1 mixtures. Some mutant viruses—including those from two sublineages with changes in the E2 envelope glycoprotein—outcompeted the corresponding wild-type virus within 10 days.

Inspection of the E2 crystal structure revealed that these residues were along a central axis, allowing predictions of other residues that might be important. Upon testing, altering those residues did not change the course of mouse infections, but did improve viral fitness for A. albopictus. The work shows that “the virus isn’t finished yet: it’s got additional opportunities to further adapt and become more efficiently transmitted by albopictus,” said Weaver.

Christopher Mores and Rebecca Christofferson of Louisiana State University, experts on interactions between arboviruses and mosquitoes, pointed out that both studies are limited by the focus on the A226V variant virus, which is better transmitted by A. albopictus. As illustrated by the current outbreak in the Caribbean, “it’s important not to discount the role of Aedes aegypti or the transmission potential of the historical Asian lineages,” said Christofferson.

Nonetheless, “thanks to the deep-sequencing technologies and even stronger computational and structural data, I think we’re getting much closer to being able to predict rather than just describe retrospectively,” said Vignuzzi.

That’s the long-term goal, said Gregory Ebel of Colorado State University, who wrote a preview accompanying the Cell Host & Microbe paper. Citing a laundry list of other emerging arboviruses such as dengue, West Nile, Zika, eastern equine encephalitis, Heartland, and deer tick, Ebel said: “[Today] we’re talking about chikungunya, but there are lots of other things like this that are waiting in the wings.”