As cases of type 2 diabetes progress, people get increasingly worse at making their own insulin, a hormone that controls levels of sugar in the blood. The usual explanation is that the insulin-producing beta cells of the pancreas are dying. But according to a study published today (September 13) in Cell, the beta cells of several breeds of diabetic mice don’t die at all. Instead, they de-differentiate into a less specialized cell type.

If a similar mechanism is occurring in humans, it might be possible to ease the progression of diabetes by finding new ways of preventing dedifferentiation, the authors suggest.

“This piece of work is not only thorough and methodologically superb but highly original and relevant,” said Ele Ferrannini, a diabetes biologist from the CNR (National Research Council) in Pisa, Italy. “The implications are that beta cell dysfunction is potentially reversible, to an extent that probably is still underappreciated.”

For Domenico Accili of Columbia University in New York, the prevailing idea about dying beta cells never quite fit all the available data. First, while traditional methods of counting beta cells indicates that these cells are indeed disappearing as diabetes progresses, the loss of cells and the severity of the symptoms are not always correlated, and some healthy people have fewer beta cells than those with diabetes. “There was always a healthy amount of scepticism,” said Accili.

To understand what was really going on, Accili and his colleague Chutima Talchai from Columbia University turned to FoxO1, a gene that produces a transcription factor in beta cells. In healthy cells, the protein is abundant in the cytoplasm but inactive. If the cells are swamped by glucose or fats—such as via a high-sugar and high-fat diet—the protein is activated, at which point it travels to the nucleus to regulate gene expression. Eventually, it disappears altogether.

To find out how FoxO1’s activation and subsequent disappearance might be related to the simultaneous disappearance of beta cells, Talchai engineered a breed of FoxO1 knockout mice. The mice seemed normal, but when they went through bouts of bodily stress, such as aging or pregnancy, their beta cell populations fell by 30 percent, their blood sugar rose, and their insulin levels fell, “reproduc[ing] perfectly the course of diabetes in humans,” said Accili.

But the beta cells did not die. By tagging both the cells themselves and the insulin they produced with fluorescent molecules, the researchers showed that the cells had merely reverted to an undifferentiated state in which they no longer produced insulin. About 25 percent of the beta cells changed in this way, accounting for nearly all of the vanished population.

The results suggest that beta cells require FoxO1 to maintain their identity in the face of long-term stress. Without this protein, they dedifferentiate into a “pre-beta” state.

Accili thinks that this phenomenon could explain the observance of “empty” beta cells in diabetic mice and humans, which look like beta cells, but make no insulin. “These are, in fact, former beta cells that have dedifferentiated,” Accili hypothesized. Once dedifferentiated, the pre-beta cells can then give rise to other types of hormone-producing pancreatic cells, including those that make glucagon, which has the opposite effect of insulin on blood sugar levels. Indeed, the diabetic pancreas is often characterised by a rise in glucagon as well as a fall in insulin.

Accili thinks that beta cells dedifferentiate as an act of self-preservation, allowing them to escape the pressure of extreme insulin production when exposed to unusually high glucose levels. “The cells perceive high blood sugar as a temporary storm, and batten down the hatches waiting for better times,” he says. This would also explain why beta cells disappear slowly as diabetes progresses and blood sugar levels get more and more unruly.

Currently, there are no drugs that can either prevent the dedifferentiation or to reverse it, but two lines of evidence suggest that such treatments are possible. First, pre-beta cells can become other cells types, and “there’s no reason to think that they can't become beta cells again,” said Accili. Second, “we have known since the 1970s that treating patients with insulin early in the course of the disease can temporarily restore beta-cell function,” he added. This idea is known as "beta-cell rest" and it might work by easing the pressure on the beta cells to produce insulin, and possibly giving the dedifferentiated population a chance to regain their previous identity.

But Peter Butler, a diabetes specialist at the University of California, Los Angeles, advises caution. Although he praises Accili’s study, he notes that other groups have found evidence of dying beta cells in other breeds of mice. Furthermore, many diabetes discoveries in mouse models do not translate to humans, he added. The next step, he said, is to show that the undifferentiated cells are more common in the pancreas of people with type 2 diabetes than in healthy individuals.

Ferrannini added that we do not know what type of metabolic stress would trigger beta cell dedifferentiation in humans, or how genetics would affect the process. 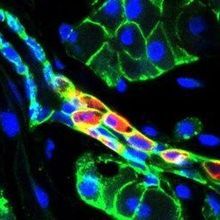