Measuring a particular set of proteins in the blood can distinguish patients with active tuberculosis infections from those with similar respiratory symptoms, according to a report in Science Translational Medicine today (October 23). The accuracy of the test, which delivers results in under an hour, comes close to that recommended by the World Health Organization for an until-now elusive TB triage test.

“This is an interesting study that has been well performed,” epidemiologist Alberto García-Basteiro of the Barcelona Institute for Global Health who was not involved in the project writes in an email to The Scientist. “Although not yet tested as a point-of-care test, this assay has the potential to become [one],” he adds.

“We definitely need non-sputum based TB tests, and a triage test will be helpful,” says epidemiologist and TB specialist Madhukar Pai of McGill University, writing in an email to The Scientist. Pai also did not participate in the research.

It is estimated that 10 million people worldwide have active TB infections and, each year, approximately 1 million will die as a result. The standard diagnosis for active TB requires three sputum samples, ideally collected each morning for three days, which are then examined on a microscope slide for the presence of the pathogenic microbes. The samples are often also cultured to enable growth of the bacteria and confirmation of the diagnosis.

While such tests provide a definitive answer, they are neither quick nor convenient. Furthermore, sputum can be hard to acquire from certain people, such as individuals with HIV in whom sputum levels may be low due to immune deficiency and children “who tend to just spit into a cup” rather than cough up actual phlegm from the lungs, says study author and proteomics researcher Michael Gillette of the Broad Institute.

These lengthy procedures are particularly problematic in the sort of resource-poor countries where TB is rife. Indeed, the inconvenience of sputum acquisition and testing is precisely why “[triage] tests have been specified by the World Health Organization (WHO) as a priority for TB diagnostic research,” writes García-Basteiro.

“What the WHO has called for,” says Gillette, “is something so that those individuals in the community health setting could make a reasonable determination about which of the patients [have active TB], so that those who really need to undergo the travel and other complexities of getting somewhere for a definitive diagnostic could . . . do so.”

Ideally, such a test would require a readily accessible sample and give a result quickly. To that end, Gillette and colleagues searched for potential protein biomarkers in the blood. They examined blood samples, collected in Tanzania and the Philippines, from 199 patients with confirmed active TB and 188 people without TB but with similar respiratory symptoms (a cough lasting at least two weeks).

Because immune responses vary depending on the infecting pathogen and because TB proteins themselves are undetectable in the blood, the team tested the blood samples for the presence and quantity of a panel of immune proteins using a commercially available assay, says coauthor Rushdy Ahmad, who was a researcher with Gillette and is now the president of blood-based diagnostic company True North Bio.

The resulting data were then processed with a machine learning algorithm to identify a set of markers whose levels were best linked to the disease. Despite poor sensitivity of the assay, which meant many samples had missing values, the algorithm identified a set of four proteins that together were increased in abundance in the TB samples. These were the cytokines Il-6, Il-8, and Il-18, and the growth factor VEGF.

To design a more sensitive assay containing these four proteins, the team employed an immunoassay technique called single molecule array (SIMOA)—developed by coauthor David Walt, a pathologist and engineer at the Wyss Institute. Using SIMOA, “we were able to fill in all those missing values,” that had been too low to detect in the commercial assay, says Walt. The team also used the SIMOA version of the test to validate the predictive power of the proteins in a second cohort of 317 samples gathered from patients in South Africa, Vietnam, and Peru. 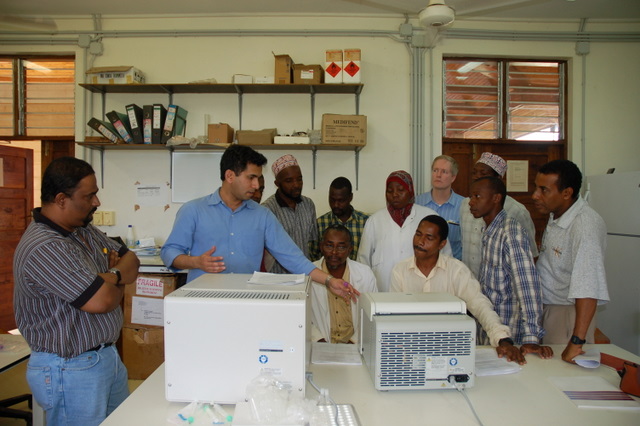 The result is “great news,” writes García-Basteiro. “However, the sensitivity [still]. . . needs to improve.”

Pai agrees. “The first step is to improve the test performance, and then figure out whether there is any hope of commercializing it at [a] price point necessary for a triage test in low and middle income countries. Realistically, that is a long way to go,” he writes.

The team is optimistic. They are examining additional biomarkers that may further improve performance and “we’re presently focusing efforts on trying to simplify and miniaturize the assay [device]” to make it small enough for deployment in point-of-care settings, Walt says. “We’re quite excited about the prospect of helping stem this scourge of a disease.”