ABOVE: A brown trout—the species used in the new study—being held by a researcher
PAVEL HORKÝ

According to a July 6 paper in Journal of Experimental Biology, brown trout (Salmo trutta) can get hooked on ecologically plausible amounts of meth. After prolonged exposure to concentrations seen in nature, the fish chose meth-laced water over water without the drug, a shift that could have ecological consequences if contamination with the drug similarly shifts habitat preference in the wild.

Pavel Horký, a behavioral ecologist at Czech University of Life Sciences Prague and the first author on the paper, and his colleagues chose to look at methamphetamine specifically because its use is on the rise globally, he writes in an email to The Scientist, “and where methamphetamine users are, there is also methamphetamine pollution of freshwaters.”

“Drug reward cravings by fish, as was documented in our results, could overshadow natural rewards like foraging or mating that provide homeostatic and reproductive success,” he explains, adding that alterations to water chemistry preferences “could represent another example of unexpected evolutionary selection pressure for species living in urban environments.”

“I think this paper is a really important contribution to our understanding of the effects of novel pollutants like illicit drugs on aquatic ecosystems and animals,” says Emma J. Rosi, an ecosystem ecologist at the Cary Institute of Ecosystem Studies in Millbrook, New York, who was not involved in the research. When Rosi and her colleagues set out to write a review of the ecotoxicological effects of illicit substances in the early 2010s, “there wasn’t much to write.” She says she’s thrilled to see more investigation in this area.

Randall Peterson, a chemical biologist at the University of Utah who helped develop a zebrafish model for opioid use disorders, urges caution in interpreting the study’s behavioral results. “I don’t think we need to run out and panic about fish being addicted to methamphetamines,” he says. “I don’t think that is necessarily warranted based on what’s in this paper.” Still, he applauds the experimental setup and use of wild-caught specimens, and says he is intrigued by the behavioral change seen in the fish, adding that the study is a step toward a broader goal of understanding how human waste may affect aquatic ecosystems. 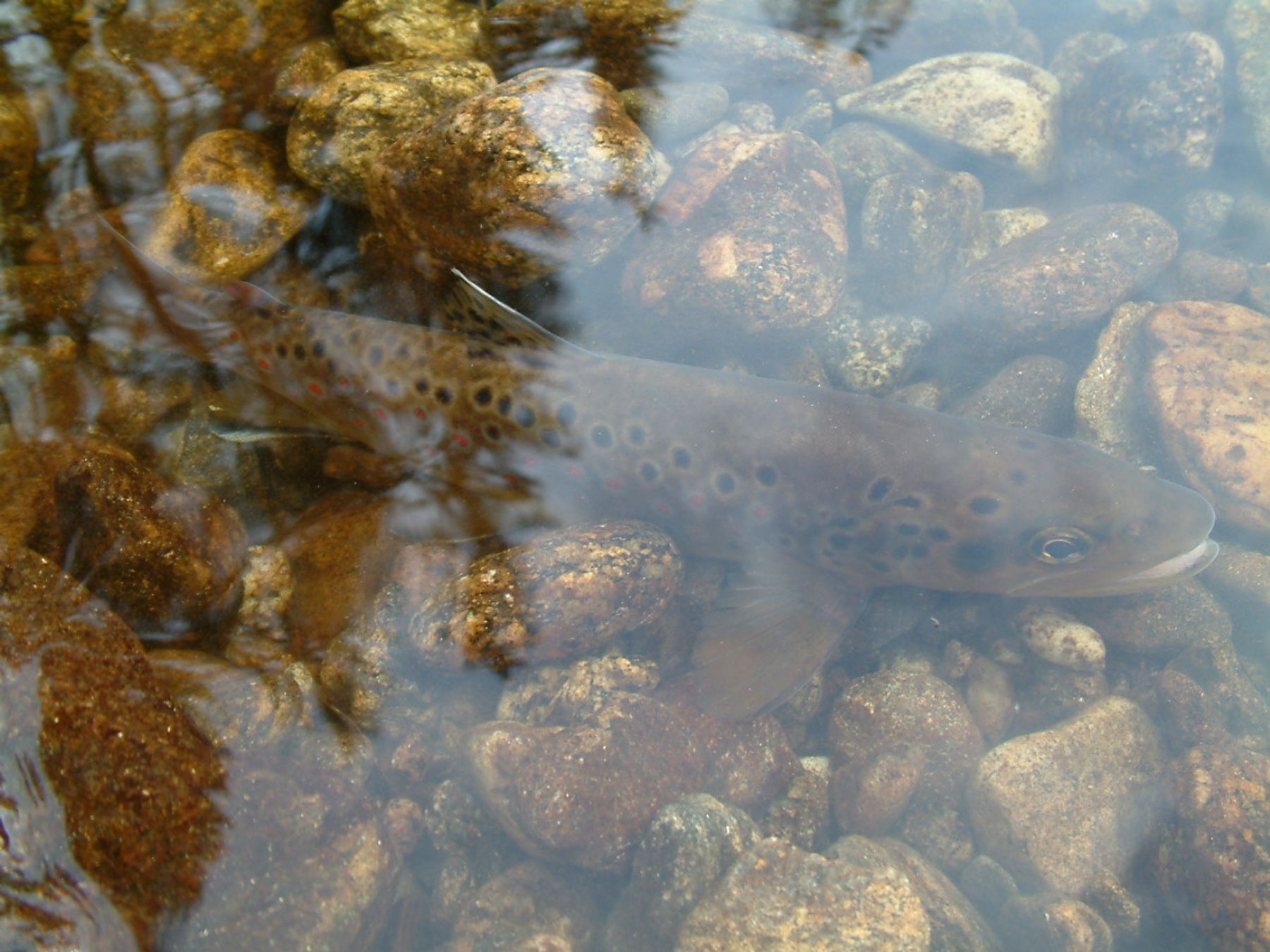 A brown trout in a Czech stream
Pavel Horký

To examine the effects of meth exposure on trout, the team collected 120 wild fish from a local fish dealer in the Czech Republic and, after a two-week acclimation period, kept half of them in tanks that contained about one microgram of methamphetamine per liter of water for the next eight weeks. That amount is an order of magnitude less than levels in wastewater discharges in Australia, but 2.5 to 5 times the highest concentrations detected directly in rivers in the US and parts of Asia. The other half resided in untreated tanks. Then, the researchers put all the fish in drug-free water, and every two days, they offered eight of each group a choice—meth or no meth—by placing them in a special tank where meth-laced and meth-free water flowed side-by-side.

The previously exposed fish spent just over half of their time on the meth-laced side, roughly 10 percent more than the unexposed control fish did. This enhanced preference was especially pronounced during the first four days after the fish were removed from the drugged water, and correlated with the amount of methamphetamine detected in the animals’ brain tissue, which was collected shortly after the behavioral test, as determined by liquid chromatography with high resolution mass spectrometry.

Other studies have found that methamphetamines alter fish behavior, but most have involved water concentrations orders of magnitude higher than in the present study. One October 2020 study, which tested lower amounts, found that medaka (Oryzias latipes) activity levels changed in meth-laced water, but the research didn’t look at whether the fish displayed a preference for waters containing the drug afterward.

Rosi applauds the new research: “It was a novel approach with really interesting questions,” she says, adding that she wasn’t exactly surprised by the results. People use drugs such as methamphetamines because they’re very potent, so it tracks that they can have potent effects on other species, she explains.

She says she’s especially excited by the paper because conducting studies with illicit substances is more difficult than with other potential wastewater pollutants. “You can’t just buy illicit drugs and have them in a lab, whereas you can very easily purchase acetaminophen or antibiotics, because those are not controlled substances,” she explains—which is why, in general, the effect of drugs in wastewaters on aquatic organisms is woefully understudied.

Peterson says he was impressed with the experimental setup. “From a technical perspective, their creation of this columnar flow system, where they can essentially create a tank with flowing water where one half has drug in it and the other does not, was really nicely executed,” he explains. He says he’d like to see research on even lower levels of methamphetamine, as based on his read of the literature cited by the authors, he finds it unlikely that a typical river would have a microgram of meth per liter of water, although wastewater discharge might. “When I go fly fishing this evening, which I plan to do, I don’t anticipate that I’ll be wading around in water with anywhere near that much.” Horký disagrees: “I would say that such concentrations are quite common worldwide.”

Peterson also says that while the fish’s preference to be in the drug is “meaningful and interesting . . . it doesn’t give us the whole picture about what’s going on.” Specifically, he notes that some researchers might quibble with the use of the term addiction, which the authors use in their paper, when the results could be explained by simple conditioning, because that’s the condition under which they had been fed and housed for eight weeks. “They’re just choosing to be in a place where there’s drug. That’s not exactly the same thing as self-administration.” The self-administration model Peterson helped develop for zebrafish involves a platform that the fish must swim over to receive a dose. The association between the platform and the narcotic substance is reinforced by a flash of light, and once the behavior is established, researchers can raise the effort required of the fish to get the drug. “I don’t see any reason why you couldn’t do something like that with trout,” he says.

Furthermore, addiction is a loaded word. “Many researchers try to be careful not to use that term. . . . We talk about being conditioned, or to animals self-administering the medication, and not necessarily anthropomorphizing to say that they’re addicted,” he says.

Still, he says he found it “really cool that they were able to see this phenomenon in a wild species that might be exposed to these drugs,” and the overall question about how drugs in wastewater affect fish is “very important. . . . I view this [as] a really an interesting paper from that perspective.”

From lab to stream

For Horký, the big, open question is how what he and his colleagues saw in the lab translates to ecological effects. He says he’d like to examine how the drug influences habitat choice or other behaviors in the wild.

Rosi and Horký both note that illicit drugs are just some of the many pollutants aquatic organisms might encounter. “Fish that are living below wastewater treatment plants are going to be exposed to illicit drugs like methamphetamines and a whole host of other compounds,” says Rosi, including pharmaceuticals and the components of personal care products. While there are numerous studies in this field, “when you consider the sheer number of compounds that are out there, the amount of research that we have done to understand the ecological effects is pretty small,” she notes.

Even more importantly, she points out that ecotoxicology researchers have almost exclusively examined singular pollutants in one or a small number of species, while in the wild, entire ecosystems are exposed to dozens if not hundreds of compounds that may act additively, synergistically, or antagonistically. “We are really, really far behind in trying to understand how these mixtures might have ecological effects,” she says.