A new study reports that human colon cancer cells at imminent risk of death can instead develop characteristics needed to colonize new parts of the body.

ABOVE: Photomicrograph of a cell coculture with a prometastatic cancer PAME cell (purple) and an induced migratory PIM cell (green) ARIEL RUIZ I ALTABA

Most cancer cells growing within a tumor stick to it for as long as they live. A few, however, may change their fate—migrating to distant sites and colonizing other organs, a process known as metastasis. As the majority of cancer-related deaths are associated with metastasis, there is a need to understand how and why cells within a tumor embark on that journey.

See “New Understandings of Metastasis Could Lead to Better Treatments”

A study published on March 8 in Cell Reports suggests that a near-death experience may induce cancer cells to initiate metastasis. Based on a series of experiments using human colon cancer cells, a team at the University in Geneva in Switzerland reports that stressed cells show a molecular signature associated with metastatic potential. Cells exhibiting this so-called prometastatic state also show enhanced motility and prompt neighboring tumor cells to migrate.

In order to understand how metastatic cells arise, Ariel Ruiz i Altaba and his colleagues first aimed to identify and characterize cells that were on the verge of becoming metastatic but had not yet started to migrate. This is a challenging task, explains Ruiz i Altaba—one can either assess the transcriptome or test for metastatic behavior, but not both.

But he and his colleagues were able to get around this problem thanks to a novel method they reported two years ago dubbed spiked-scRNAseq. They first created single-cell clones from a heterogeneous colon cancer cell population and tested their metastatic behavior in vitro and in vivo. Then, genetically labelled cells derived from these clones were “spiked” into the main cell population, which was subjected to single-cell RNA sequencing. Labelled cells with different metastatic behaviors mapped to separate cell populations within this analysis. This allowed the team to associate specific genetic signatures with cancer cell populations having differential metastatic potential.

“With those signatures, we could now ask how [these prometastatic cells are] induced,” he says, and that’s the basis of the new work. Using the same colon cancer cell lines characterized in that previous work—which came from two female patients—the team now exposed the cells to an agent that induces apoptosis, and then, six hours later, to apoptotic inhibitors.

“What doesn’t kill you makes you stronger and more aggressive,” says Gabriel Ichim, a cell death researcher at the Cancer Research Center of Lyon in France, who was not involved in the study. Indeed, previous research shows that cancer cells that survive advanced stages of apoptosis also tend to become more invasive. HeLa cells recovering from apoptotic stress, a process known as anastasis, can transit from a proliferative to a migratory phenotype. In 2020, Ichim’s team showed that melanoma cancer cells acquire migratory and invasive properties when they start apoptosis but failed to complete it, either in response to chemotherapy or proapoptotic proteins.

Cells surviving the chemical stress in this new study had the signature of a prometastatic state as previously defined by Ruiz i Altaba’s team, and showed high levels of endoplasmic stress and increased migratory behavior. The cells also went into metastatic reprogramming, which involves expressing genes associated with stemness—allowing them to shed their previous state as part of the primary tumor and modify their cell fate. Engrafting the stressed cells into a mouse model also increased the chances of distant metastasis compared to inserting cancer cells that hadn’t been driven to start apoptosis.

The team also found that cultured cells developed the same enhanced metastatic behavior when exposed to drugs used to treat cancer, either together with the apoptosis blockade or alone at doses below those needed to kill the whole population.

The team named these cells PAMEs, both for “post-apoptotic prometastatic cells” and for the phrase “let’s go” in Greek. The term suits them well—PAME cells unleash cytokine storms that spur neighboring tumor cells to start migrating, the team found. These PAME-induced migratory cells (PIMs) also display the prometastatic signature and reenact the cytokine storms, yet they don’t have the same level of stemness and metastatic reprogramming, and are unable to metastasize without the presence of PAMEs. By labelling cells of both types and following them using time-lapse photography, the authors observed that PAME and PIM cells associate before starting migration.

“The advantage of migrating together” is that “you take with you something from your primary tumor,” which is like transporting the tumor microenvironment to the metastatic site, explains Ichim. “PAME cells secrete cytokines which are feeding the PIM cells—it’s like taking the kitchen and all the food with you to establish a successful metastasis,” he notes. 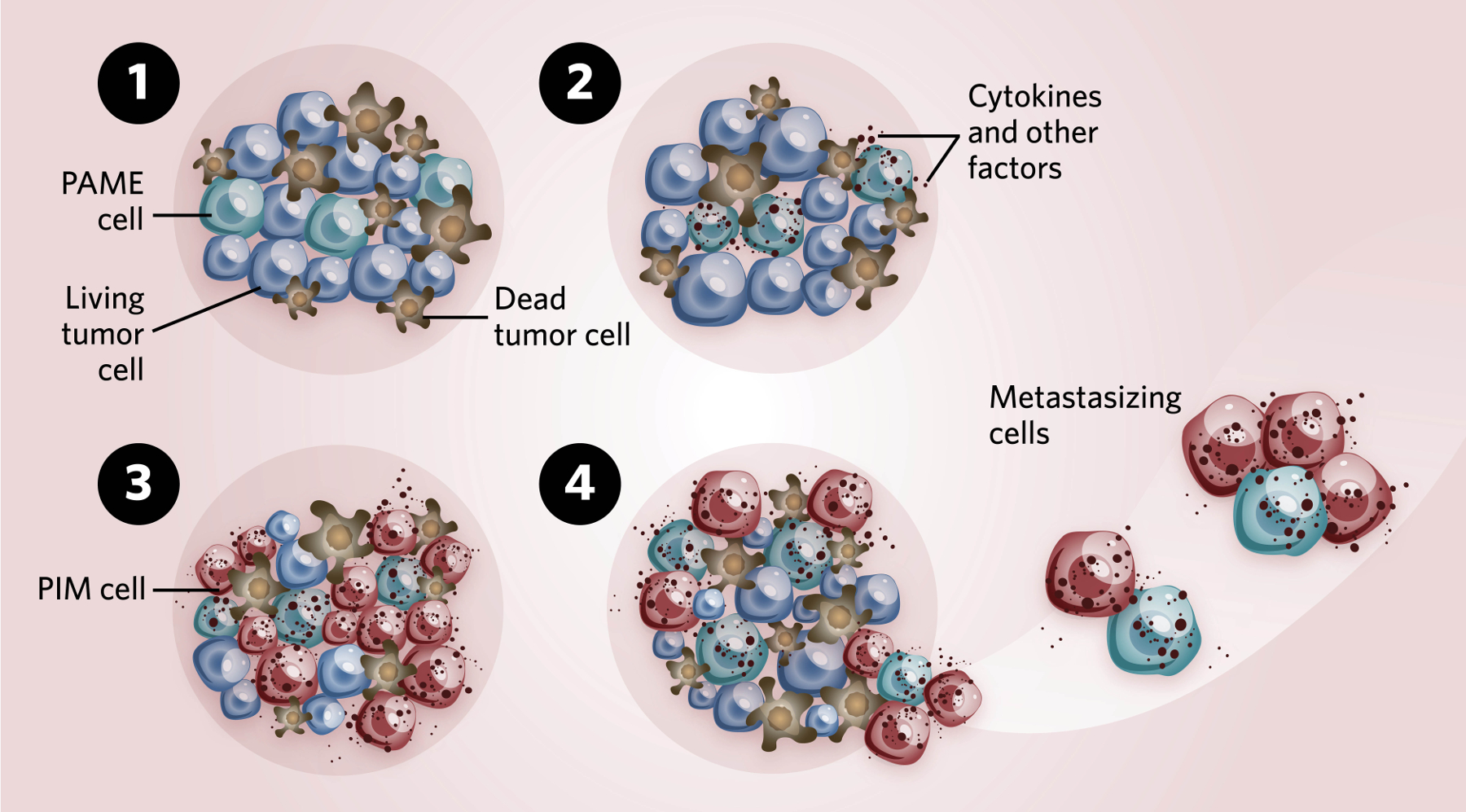 Various factors such as chemotherapy, hypoxia, or lack of nutrients can bring tumor cells to the brink of death. According to the new study, those that survive a near-death experience transform into a state with metastatic potential, so-called PAME cells, meaning “let’s go” in Greek (1). Once induced, PAME cells secrete cytokines and other factors (2) that prompt neighboring tumor cells to themselves secrete cytokines, also influencing the tumor microenvironment (3). PAME and PIM cells appear to associate before embarking on the journey toward other sites of the human body (4).
COMPOSITE FROM © ISTOCK.COM, TTSZ, THE SCIENTIST STAFF

These data support the notion that “within a tumor, some cells might be better at migrating,” helping the spread of “other cells that might be better at surviving and proliferating,” writes University of California, Santa Barbara, cell biologist Denise Montell in an email to The Scientist. She did not participate in the work but has studied how cells surviving apoptosis may complicate response to chemotherapy.

The new findings join a body of work by Montell, Ichim, and others that seeks to understand precisely why chemotherapy is associated with a higher risk and incidence of metastasis. Other cell types in the tumor microenvironment also play a role in this transition, explains Maja Oktay, a cancer researcher at Albert Einstein College of Medicine who did not participate in the new study. Together with her colleagues, she recently reported that macrophages can interact with tumor cells to induce disseminating, stem, and dormancy phenotypes—all associated with the development of metastasis.

But near-death experiences are not unique to cancer cells treated with chemotherapeutic drugs. Cell death within a tumor is common. “If you take a big tumor and you cut it, you often find a huge central nodule part that is dead,” says Ruiz i Altaba. While cell growth mainly takes place at the edges of the tumor—where there is oxygen and nutrients, he explains—cells in the center may experience hypoxia and lack of nutrients, which occasionally lead to death.

The possibility that a few cells may narrowly escape death in such scenarios increases the chances of having cells that may become more aggressive and prone to metastasis. According to all the researchers interviewed for this piece, this is a phenomenon that should be taken into account when developing cancer therapies.

“Most chemotherapeutics have been measured and clinically tested and approved with a single measure, which is primary tumor reduction,” says Ruiz i Altaba. But as his and others’ findings suggest, reducing tumor size is not enough if some cells start migrating as a consequence of surviving treatment. For instance, PAME cells could be targeted to prevent this, he says. “Now that we think we know who they are, we are going to dig deep to . . . understand them and see how we can target them, either with small molecules or making them palatable to T cells.”

Ichim says he could imagine combining chemotherapy with antibodies that could block specific cytokines relevant to the development of metastasis. He concludes that the future of cancer treatment will not rely on single drugs, but rather on smart combinations that should aim to prevent metastasis.