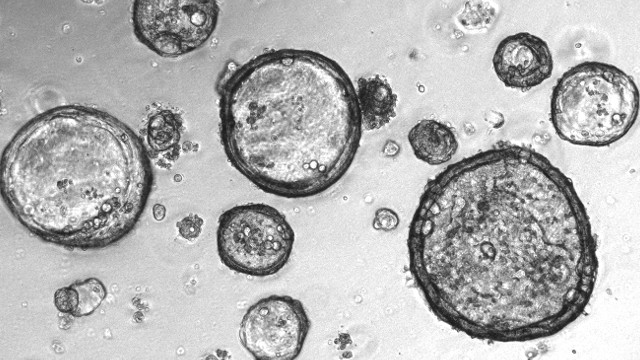 Gastroesophageal cancer organoids GEORGE VLACHOGIANNIS For cancer patients with just months to live, time is short—too short to try drug after drug with the hope of finding one that slows the disease. But lab-grown mini tumors derived from patients’ cells could offer a way to test many drugs in parallel, saving time and possibly extending lifetimes. A report today (February 22) in Science brings this concept closer to clinical reality.

Previously, there has been “anecdotal evidence that observations in the clinic can be reproduced with organoids,” says stem cell and developmental biologist Hans Clevers of the Hubrecht Institute in Utrecht, the Netherlands, who was not involved in the research. “But, [the authors] have now for the first time come up with a large number of cases like that and have statistical [results] that are very impressive.”

They have “shown definitively that these organoids are predictive of response,” Clevers continues....

In the study, researchers focused on patients with recurrent metastatic cancer—tumors around the body and possibly also at the primary site that return after standard chemotherapies. When patients reach this stage, “their survival is in the region of months,” says Nicola Valeri of the Institute of Cancer Research in Sutton, U.K. who led the research. Such patients are often recruited to clinical trials of new drugs, but the problem, says Valeri, is that there are a number of clinical trials to choose from. “If you go down the route of the right treatment, the patient might actually live longer . . . [but] if you go down the route of the wrong treatment, the patient might become too unwell to receive an alternative.”

Identifying the particular mutations present in a patient’s cancer is one approach to guiding treatment decisions, but in reality only a handful of mutations are known to confer sensitivity or resistance to certain drugs. And, even if such mutations are present, the tumors don’t always respond as expected.

Tumor organoids—model tumors grown in a dish from tumor biopsy cells—were originally developed for research into cancer physiology, says Valeri. But, he and his colleagues reasoned, if the organoids really do mimic the physiology of the original tumor, they might be suitable for testing candidate drugs before giving those drugs to patients.

“Nobody has ever compared how these organoids taken from the patient behave in the lab compared with how the patient responds in the clinic,” Valeri says, until now.

He and his colleagues collected 110 biopsies of metastatic tumors from 71 patients with gastroesophageal or colorectal cancers. Approximately 70 percent of the tumors were successfully grown into organoids. Comparing the genetic mutations and protein markers of the organoids with those of the parental biopsy material revealed “a 96 percent overlap in terms of molecular makeup,” says Valeri. And these similarities persisted long after the organoids were grown. “This proved to ourselves that the system was in fact very robust,” he says.

The patients who provided the biopsies were enrolled in a variety of clinical trials of new drugs, so the team tested those same drugs on the tumor organoids. Valeri and his colleagues found that in 100 percent of cases, if a drug didn’t work on a patient’s organoids, then it didn’t work in the patient, and that in nearly 90 percent of cases, if a drug did work on the organoids, then it worked in the patient, too.

The team also tested a panel of 55 drugs that are in either clinical or preclinical development on the organoids. For drugs where the effectiveness can differ depending on tumor-specific mutations, the researchers found the organoids almost always responded as would be expected for their genotype.

This study shows it is technically possible to use a patient’s organoids for screening candidate cancer treatments, says childhood cancer expert Sam Behjati of the Wellcome Sanger Institute in the U.K. who was not involved with the project. “It begins to paint a picture whereby you could envision that in the future . . . we can actually find a way of doing this routinely for patients.”

Correction (February 26): We updated the text to say in “nearly 90 percent” of cases when the drug worked in the organoid it also worked in the patient, rather than in 90 percent. The Scientist regrets the error.