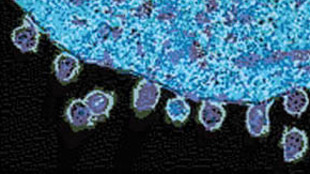 HIV particles budding off the surface of an infected T cell. WIKIMEDIA, NIAID

For the millions of people living with HIV worldwide, a life-long commitment to antiretroviral drugs is a must. Without these drugs, reservoirs of HIV hiding within resting T cells throughout the body can easily resurge and cause disease. In a study published yesterday (October 20) in Nature Communications, researchers from the National Institute of Allergy and Infectious Diseases (NIAID) in Bethesda, Maryland, described a bispecific antibody-like protein that attacks those reservoirs by coaxing HIV out of hiding and targeting infected cells for destruction.

“In order to kill the [infected] cell, the cell has to be activated,” said study coauthor John Mascola, director of NIAID’s Vaccine Research Center. This is because HIV has a way of hiding out inside inactive CD4+ T cells where the virus adopts a dormant-like state known as latency. In this state,...

Mascola and his colleagues designed a protein that activates latently-infected T cells by targeting a protein found on the surface of all T cells called CD3. Engagement of CD3 signals infected CD4+ T cells to start dividing, which revamps HIV’s replication machinery causing the virus to make proteins that appear on the surface of the infected cell. Mascola’s team tested the protein, called VRC07-αCD3, on T cells donated by HIV patients on antiretroviral therapies. The researchers found that VRC07-αCD3 caused the T cells to display Env, indicating that latent virus had become reactivated.

The NIAID study was preceded by one in The Journal of Clinical Investigation that described a similar protein with dual specificities for CD3 and Env, but with a slightly different structure. Both designs share features that allow the proteins to activate latent cells, tag Env, and activate and bring killer CD8+ T cells into close proximity of their infected targets.

The dual specificity for CD3 and Env also provides a layer of safety: it ensured the killer CD8+ T cells only acted in full force when HIV was present. “That was an encouraging part of the data,” Mascola said.

Schwartz said this feature potentially addresses the concern that nonspecific activation of large numbers of T cells could elicit a dangerous overactivation of the immune system called a cytokine storm.

Mascola and his colleagues tested the safety of VRC07-αCD3 in five HIV-infected Rhesus macaques by giving the animals six doses over the course of three weeks. The monkeys were also on antiretroviral drugs, and the virus remained undetectable throughout the treatment. Although the monkeys tolerated the drug well, VRC07-αCD3 did activate T cells and caused serum cytokine levels to increase. “So this type of treatment is not risk-free,” Caltech virologist Pamela Bjorkman, who was not involved in the work, wrote in an email to The Scientist.

Mascola said his group plans to continue testing VRC07-αCD3 in macaques and in humanized mice to work out a balance between T cell activation and HIV killing. However, neither model “really tells you what’s going to happen in people,” he said. “We’ll have to proceed slowly in the clinic.”