Ultrasound and microbubbles can safely open the blood-brain barrier in patients with Alzheimer’s disease, researchers reported yesterday (July 25) in Nature Communications and at the Alzheimer’s Association International Conference in Chicago. The noninvasive technique could aid in getting therapies for the neurodegenerative disease straight to the brain.

“This is a critical first step,” study coauthor Nir Lipsman, director of the Harquail Centre for Neuromodulation at Sunnybrook Health Sciences Centre, says in a statement. “By successfully, safely and reversibly opening the blood-brain barrier in patients with early to moderate Alzheimer’s disease, we can support the continued investigation of focused ultrasound as a potential novel treatment, and further study the delivery of therapies that otherwise cannot access the brain.”

In the study, Lipsman and his colleagues injected microbubbles into the blood of three men and two women with mild-to-moderate Alzheimer’s disease and then directed focused, low-frequency ultrasound waves toward amyloid-rich areas in the right frontal lobe of the patients’ brains. The treatment opened the blood brain barrier, which quickly sealed itself again within 24 hours. None of the patients’ brains showed signs of hemorrhage, swelling, or cognitive decline the day of the procedure or during follow-up visits, team found.

See “Getting Drugs Past the Blood-Brain Barrier”

The results are “definitely promising,” Eliezer Masliah, a neuropathologist at the National Institute on Aging who wasn’t involved with the study, tells the Associated Press. “What is remarkable is that they could do it in a very focused way, they can target a very specific brain region.”

The team plans to test the ultrasound technique in a Phase 2 clinical trial with a larger group of Alzheimer’s patients starting in the fall. The approach might not be limited to Alzheimer’s disease. Researchers are testing focused ultrasound to open the blood brain barrier in specific spots to treat other neurological conditions, such as Lou Gehrig’s disease or glioblastomas.

In the Sunnybrook statement, study coauthor Sandra Black notes that the technique is early in its development, but in the future may “provide a non-invasive, effective way of delivering large molecules such as antibodies or even stem cells directly to the brain.” 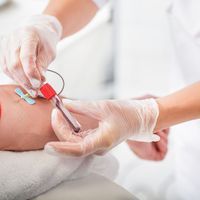