The brain is a master of forming patterns, even when it involves events occurring at different times. Take the phenomenon of trace fear conditioning—scientists can get an animal to notice the relationship between a neutral stimulus and an aversive stimulus separated by a temporal chasm (the trace) of a few or even tens of seconds. While it’s a well-established protocol in neuroscience and psychology labs, the mechanism for how the brain bridges the time gap between two related stimuli in order to associate them is “one of the most enigmatic and highly investigated” questions, says Columbia University neuroscientist Attila Losonczy.

If the first stimulus is finished, the information about its presence and identity “should be somehow maintained through some neuronal mechanism,” he explains, so it can be associated with the second stimulus coming later.

Losonczy and his colleagues have recently investigated how this might occur in a study published May 8 in Neuron. They measured the neural activity in the hippocampal CA1 region of the brain—known to be crucial for the formation of memories—of mice exposed to trace fear conditioning. The team found that associating the two events separated by time involved the activation of a subset of neurons that fired sparsely every time mice received the first stimulus and during the time gap that followed. The pattern emerged only after mice had learned to associate both stimuli.

The study highlights “the important question of how we link memories across time,” says Denise Cai, a neuroscientist at the Icahn School of Medicine at Mount Sinai who was not involved in the work. Studying the basic mechanisms of temporal association is critical for understanding how it goes wrong in disorders such as post-traumatic stress disorder (PTSD) or Alzheimer’s disease, she says. 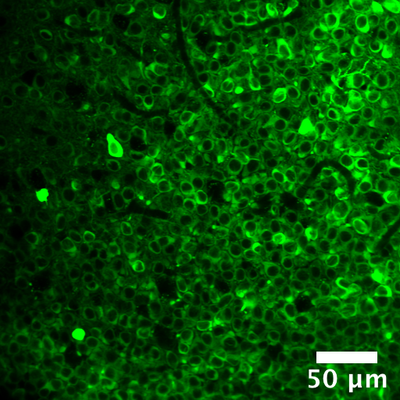 One of the prevailing hypotheses to explain how the brain connects two events separated in time has been the existence of specific neurons that become active during the tone and continue firing after it ceases during the trace period. Such a strategy has been observed during working memory, for example, in tasks where you need to temporarily memorize an image, or remember a phone number.

Another influential hypothesis has been that, during the trace period that separates the two stimuli, neural populations fire in a sequential manner, and through this chain, the information is carried from the time where the tone is heard to when the aversive experience occurs. The neurons involved in this sequential phenomenon, which is commonly observed in gaps lasting a few seconds, are also known as time cells.

See “How Time Is Encoded in Memories”

Losonczy and his colleagues tested both hypotheses by studying the hippocampal neural activity of six mice during the formation of the temporal association between a 20-second–long tone and an annoying air puff directed at their snouts 15 seconds afterward. Mice were water-deprived, head-fixed, and immobilized next to a water port, from where they were trained to lick for small rewards. They would only stop licking when they heard the tone, once they had learned the air puff would come soon, likely due to a general freezing response to fear. The mice were also exposed to a second type of tone not followed by the air puff. The team used two-photon microscopy and calcium imaging—an indicator of neural activity—to identify and visualize between 158 and 500 neurons per mouse and record changes in their behavior over time.

The information of this neural activity was then fed to a decoder so it could learn to associate patterns of neural activity to the state of a variable, for example, the identity of the tone—whether it corresponded to the one followed by the aversive stimulus, or to the other tone. After being trained, the algorithm was asked to make predictions, such as the tone identity from data of experimental trials not used to train the decoder.

The decoding analysis did not show any evidence of either specific neurons firing continuously or sequences of time cells during the trace. “It was definitely surprising,” says Losonczy, that neither hypothesis was supported by his data.

Takashi Kitamura, a neurobiologist at the University of Texas Southwestern Medical Center who did not participate in the study, says he speculates that it’s possible time cells were not found because they might only be relevant when the brain needs to remember timing. He gives as an example the time-bridging task of trace eyeblink conditioning, in which mice learn to associate a conditioned stimulus with an aversive air puff directed to the eye, so they need to blink at a specific time to avoid it. Here, remembering the length of the time between both events matters. “But if I just link two events with a temporal gap, probably it is not necessary to have time cells,” he says.

So the team tested a third hypothesis. They asked the decoder to predict tone identity based on the average activity rate across the 35 seconds that span the tone plus the trace period. The decoder was finally successful at the prediction, and the team found that this was partly based on the information of a particular subset of neurons that fired sparsely and stochastically every time the tone was heard. Losonczy says that this might be a way to optimize for efficacy and energy consumption, in contrast with continuous or sequential neural activity, which can be quite costly, particularly for long time gaps.

Kitamura says he likes this alternative hypothesis, where a subset of neurons tunes its firing rates depending on the identity of the tone. This might be related to what is known as the engram hypothesis, in which a group of neurons stores memory information. No one had “applied this engram hypothesis to the temporal association memory,” says Kitamura. However, he adds, this idea needs to be further examined, for example, by inhibiting this neural population and testing whether this results in a deficit during the temporal association memory.

See “How Mice Forget to Be Afraid”

Even if the activity of this population of neurons is indeed linking two stimuli together across time, the precise mechanism for the memory formation is still not clear. “We believe that synaptic plasticity is involved,” says coauthor Stefano Fusi of Columbia University. “If it is synaptic, it would be great to prove it directly, but it is extremely difficult to study the synapses in vivo, especially individual synapses.”