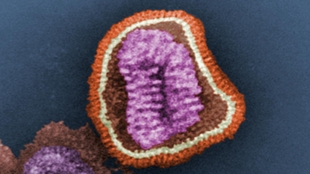 Influenza virion.Wikimedia, CDCIt’s a frustrating fact of life that coming down with influenza one year doesn’t guarantee anyone a flu-free season the next year. Even the flu vaccine doesn’t provide full-proof protection, as it covers only a select few strains of the virus—a selection that’s based on the World Health Organization’s best bet as to which strains around the world will be most prevalent in the coming flu season.

Unfortunately, those predictions are proved wrong about one time out of 20, explained Sarah Gilbert, who leads the Human Influenza Vaccine Programme at the University of Oxford’s Jenner Institute.

However, some researchers are getting closer to creating the ever-elusive universal flu vaccine, which could protect against a number of influenza viruses at once, including pandemic strains. If successful, universal flu vaccines would take the guesswork out of vaccine planning, and only require booster shots every few years.

Influenza is an RNA virus that uses its hemagglutinin (HA) protein like a key to allow it to enter and infect target host cells. In response to infection, or to a typical flu vaccine, the body produces antibodies that bind the head of the HA molecule, preventing free-floating virus from entering and infecting cells. However, the head is also the part of the HA protein that the virus most frequently changes via mutation, making the antibodies produced against one strain ineffective against another.

The answer to creating a vaccine that protects against many strains lies in forcing the immune system to make antibodies against the portions of the HA molecule that are shared, or genetically conserved, among most influenza viruses, thus creating a more universal vaccine. But, for unknown reasons, most vaccines don’t elicit such antibodies. So researchers are now trying new ways of enticing the immune system into making antibodies that recognize these general targets and neutralize many types of influenza at once.

“Up until about 4 years ago, we didn’t know much about human broadly neutralizing antibodies,” said Ian Wilson, a structural biologist at The Scripps Research Institute. But the last few years, researchers have found individuals who produce  antibodies that neutralize a wide variety of both influenza A and B strains, showing that “a universal vaccine is possible if you can elicit the same types of antibodies” in others, said Wilson.

Wilson’s lab helped solve the structure of some of these broadly neutralizing antibodies and the region of HA they target—the conserved stem of HA. More recently, Wilson and his collaborators have shown that because HA’s head region has tiny conserved areas, occasionally even an antibody directed at the HA head can have some cross-reactivity among influenza types.

But most researchers think a stronger antibody can be made against regions in the HA stem. Specifically, some researchers think that a “headless” HA proteins could focus the antibody response on the conserved stem region. Others are looking to design vaccines that contain only small portions of the most important conserved segments of the stem region. Still others  are focused on understanding the basic immunology of how antibodies bind and recognize their targets in order to improve vaccines from a different angle, and possibly understand why antibodies aren’t often naturally made to the stalk region, said Wilson.

Several biotech companies are preparing what they hope will become the first universal flu vaccines on the market, though none have been tested as a universal vaccine yet. Most have been tested for safety and ability to stimulate an immune response in healthy volunteers, or boost efficacy of current vaccines with mostly positive results. One strategy being tested combines several conserved regions of flu proteins into one molecule to produce a vaccine that hopefully stimulates an antibody response against a wide variety of strains. This includes the M-001 vaccine from Israel-based BiondVax, which contains regions from HA and two internal virus proteins. When M-001 was combined with the seasonal vaccine, it enhanced immunity to the strains contained in the seasonal vaccine. Other companies are pursuing similar methods, said Gilbert. “They’re all trying to use only very small [conserved] regions, and they all have their own strategies to identify which regions” are the best, as well as ways to produce stronger immune responses, she said.

John Schrader, an immunologist at the University of British Columbia says that it may be possible to generate broadly neutralizing antibodies using currently available vaccines, if it’s done correctly, he says. Schrader and his colleagues found that infection with, or vaccination against, the pandemic 2009 H1N1 strain (swine flu) produces the elusive broadly cross-neutralizing antibodies that seasonal vaccines do not. This may be because H1N1 is radically different from the other viruses commonly circulating in the human population. That distinctiveness may allow the virus to be recognized by a rare set of memory B cells, Schrader said.

Normally, the seasonal flu virus activates a wide array of B cells, most against the head region, a few against the stalk. Some of each persist after the infection as “memory” cells. When the next seasonal flu virus infects, it has similar head regions to previous viruses, so it’s the memory cells that bind to the head region that are activated, while the rare B cells against the conserved stem region get lost in the shuffle. But a drastically different virus like H1N1 only shares stem regions with previous viruses, so it can activate rare anti-stem memory B cells without also activating the anti-stem memory cells--producing large amounts of broadly neutralizing antibodies, Schrader said.

Therefore, prompting the production of broadly neutralizing antibodies could be as simple as vaccinating with a rare virus strain, and boosting with different rare strains, to ensure that only memory B cells that recognize the stem are activated. It would be key, in Schrader’s strategy, to avoid vaccinating someone twice with the same vaccine, so that B cells that recognize the head regions don’t also get re-activated.

Rather than trying to find the perfect region or regions of the HA molecule, some researchers are looking to other conserved viral proteins. The M2 protein, which helps the flu virus empty its contents into its target cell, is one of only three viral proteins dotting its surface—and one of the least variable between strains. But M2 presents several challenges for investigators hoping to produce an M2-targeted vaccine, cautioned Sang-Moo Kang, an immunologist at Georgia State University.  First, there are many fewer M2 proteins than HA proteins, and secondly, the antibody-targeted region of M2 is about 20 times smaller than HA’s, “so M2 can’t compete in terms of host response,” said Kang. Also, rather than stimulating the generation of antibodies that prevent infection by blocking viral entry into cells, anti-M2 antibodies target infected cells, leading to their lysis. Such a vaccine would likely just contain an infection rather than prevent cells from becoming infected in the first place.

Despite these hurdles, at least one company is targeting M2 in their bid to produce a universal vaccine. VaxInnate, a New Jersey-based biotech company, has performed clinical trials using M2 epitope (M2e) fused to a bacterial protein. Like other vaccines being touted as future universal vaccines, VaxInnate’s method has yet to be shown to be effective against infection with a variety of strains. So far, VaxInnate has used their M2 vaccine to boost immune responses to a current influenza vaccine.

Although most of the work to date has focused on antibody or B-cell-mediated responses, some researchers think that T cells—which kill virally infected cells—will be an important facet of universal vaccines. Because T cells kill flu-infected cells, they can prevent newly replicated virions from escaping infected cells and thus keep the infection from spreading through the body (sometimes so well that a patient notices no symptoms). Current vaccines don’t do much to activate T cells, which explains why previous infection with seasonal flu can protect against pandemic strains, but previous vaccination does not. T cells react to viral proteins that are chopped up and presented by infected cells, allowing them to recognize regions of conserved internal proteins that B cells—which  generally target surface proteins—miss.

Gilbert at the Jenner Institute and her colleagues created a vaccine made of two conserved internal influenza proteins attached to a live vaccinia virus that is rendered unable to replicate. When patients were exposed to a strain of flu they had not encountered before, only 2 out of 11 patients who’d been vaccinated with Gilbert’s vaccine contracted the flu compared to 5 out of 11 un-vaccinated controls. Despite the promising results, “I wouldn’t want to sell a vaccine that only targets T cells,” noted Gilbert, who is currently working on combining her T cell vaccine with proteins to stimulate neutralizing antibodies as well.

Even if researchers do create vaccines that protect against all influenza viruses, we’ll still need to get vaccinated regularly—just not every year, said Gilbert. Unlike some other viruses, the flu doesn’t stimulate strong enough immune memory to keep us protected for life, even using a more universal vaccine. Gilbert estimates that future vaccines may stretch our yearly needle jabs to once every 5 years or so.