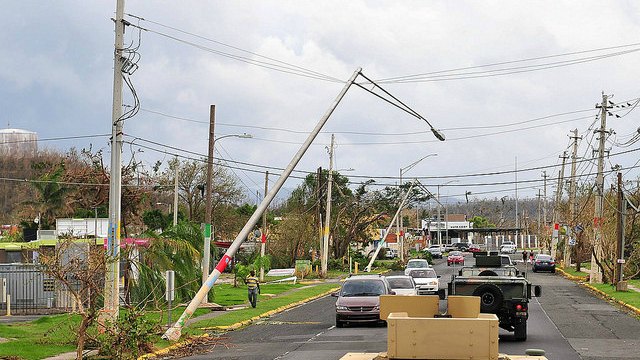 FLICKR, PUERTO RICO NATIONAL GUARDUpdate (September 30): Ciencia Puerto Rico, an organization that supports Puerto Rican scientists, is coordinating efforts to aid researchers affected by Hurricane Maria. Scientists can register to offer assistance. The American Society for Cell Biology also has a database of aid offers to those affected by recent hurricanes in the U.S., and a Thomas Jefferson University neuroscientist, Tim Mosca, launched an online list of investigators willing to help. The American Society for Biochemistry and Molecular Biology is giving $2,000 grants to students and researchers affected by Hurricanes Harvey, Irma, and Maria.

The University of Puerto Rico’s 11 campuses are closed due to the devastation after Hurricane Maria, The Chronicle of Higher Education reports.

“The whole island is without power right now, and the destruction has been catastrophic,” university communications director Joseph Martinez Huarneck, tells the Chronicle. Internet, television, radio, and cell-phone service are unstable,...

Photos of the campus posted on Twitter show fallen trees littering the quads and pathways.

The university could be closed for a month, the dean of students at the Río Piedras campus Gloria Díaz Urbina tells El Vocero.

The category 4 hurricane made landfall on Wednesday (September 20) and has devastated the island. Crops are razed; pharmaceutical plants are shut down; medical facilities are in bad shape.

Within hours of its arrival, the storm destroyed 80 percent of Puerto Rico’s crop value, Carlos Flores Ortega, Puerto Rico’s secretary of the Department of Agriculture, tells The New York Times.

“There will be no food in Puerto Rico,” a Puerto Rican plantain farmer tells the Times. “There is no more agriculture in Puerto Rico. And there won’t be any for a year or longer.”

Many hospitals are flooded and running out of fuel for their generators. Evacuation to the U.S. mainland may be necessary for many patients. San Juan International Airport is swamped with travelers, according to Reuters.

Today (September 25), the National Weather Service has issued a flood warning, Reuters reports, with the Guajataca dam at risk of collapse. The dam, in the northwest, has already cracked, and police are urging residents who live nearby to evacuate, the Times reports. The dam, built in 1929, creates a reservoir from the Guajataca River. Flood damage is not the only danger of a dam break.

“This is a serious situation because that’s our drinking water,” Miguel Abrams, the emergency management director of the city of Quebradillas tells the Times. “Seven or eight cities depend on that lake to drink.”

USA Today reports that most if not all of the island’s nearly 50 pharmaceutical plants are “effectively idled,” raising the possibility of drug shortages. Power may be out for as many as six months. Even though many plants have backup generators, numerous employees are unable to come to work.

In the Caribbean, Hurricane Maria has caused an estimated $45 billion of damage and lost economic activity, $30 billion of it in Puerto Rico, Chuck Watson, a disaster modeler at Enki Research in Savannah, Georgia, tells Reuters.