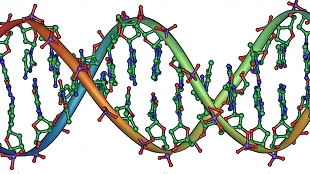 Researchers investigating expanding the DNA “alphabet”—developing artificial bases that can potentially encode more information than the standard A, T, C, and G—have found that DNA polymerase is more accommodating to unusual base pair conformations than previously thought, in new research published this week (June 3) in Nature Chemical Biology. While grabbing the template and replicating DNA strands, the polymerase is able to force the base pairs to adopt a standard geometry, even if they don’t align this way in a normal double helix, explaining how polymerase can incorporate these unnatural bases into DNA sequences.

“This paper makes a very important contribution to synthetic biology,” said Steven Benner, Distinguished Fellow at the Foundation for Applied Molecular Evolution and the Westheimer Institute, who also works on unnatural bases, but was not involved in the study. “It shows how...

Developing artificial base pairs that can be efficiently incorporated into replicating DNA in vivo would be a first step in engineering a semi-synthetic organism, said co-senior author Floyd Romesberg at The Scripps Research Institute in California. Scientists also hope to engineer new bases for in vitro applications, said Romesberg, perhaps using unnatural bases with added functional groups to help design DNA or RNA molecules with enzymatic activity.

Scientists looking to develop an expanded genetic alphabet have taken different approaches to designing new bases. Benner, for example, has developed bases that associate via hydrogen bonding, much like standard nucleosides, which reach across the center of the double helix to form hydrogen bonds, creating a single plane by aligning their edges. Romesberg’s group, on the other hand, developed the unnatural bases dNaM and d5SICS, which associate not through hydrogen bonds, but hydrophobic interactions, such that the bases form a slightly crimped helix. Despite this unusual geometry, dNaM and d5SICS can be incorporated into DNA during PCR reactions almost as efficiently as standard bases.

But DNA polymerase is known to need bases to conform to the standard, coplanar geometry, known as Watson-Crick geometry, explained Romesberg, so it wasn’t clear how the enzyme was able to deal with the unnatural bases. Did it seek out bases in the correct conformation, for example, or can it nudge bases into the right alignment?

In what Benner described as a “technical tour-de-force,” Romesberg’s lab, working primarily with Andreas Marx’s group at the Universität Konstanz in Germany, generated X-ray crystallography structures of the active core of DNA polymerase complexed with either the unnatural base pair, dNaM–D5SICS, or a standard guanine–cytosine pair. Surprisingly, despite its unusual structure in the DNA helix, the unnatural base pair conformed to standard Watson-Crick geometry when grasped by the polymerase, demonstrating the enzyme’s ability to enforce this necessary geometry when replicating DNA.

The understanding of how the DNA polymerase interacts with the artificial base pairs will give clues to scientists hoping to further engineer the bases or polymerase, said Eugene Wu, a biochemist at the University of Richmond in Virginia, who was not involved with the study. “As a scientist, you feel you really understand a system when you can re-engineer it,” Wu said. Of course, successful DNA replication in vitro is only the first step in creating an organism that incorporates artificial bases into its genetic code, he added. Other enzymatic hurdles will also need to be cleared, such as DNA repair enzymes that may recognize artificial bases and excise them.

In the meantime, Romesberg and colleagues are working to optimize how the bases interact with polymerase. The group also plans to attach fluorescent groups to their artificial bases via linkers to examine the biophysics of ribosome assembly and function, evolve DNA molecules with catalytic properties, and, ultimately, design in vivo systems where these bases can be incorporated into replicating DNA and passed to daughter cells.

“That would really be the home run,” Romesberg said.