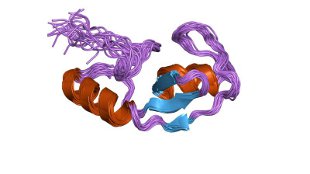 Researchers have unsilenced a gene in mice that is repressed in a disorder called Angelman syndrome, which causes seizures and developmental delays, among other symptoms. The findings raise hopes for a potential cure for the devastating disorder, which affects about one in 15,000 people, and suggest that other gene-silencing diseases could be targeted using a similar approach.

“The big take-home message is that you can turn the gene back on,” said Stormy Chamberlain, a geneticist at the University of Connecticut Health Center who was not involved in the study. “That really gives a lot of promise to the families with that disorder,” as well as patients with any disease that is the result of a functional copy of a gene being silenced, she added.

In 1965, pediatrician Harry Angelman first identified the syndrome, a neurodevelopmental disorder that can cause seizures, sleep disorders, speech problems,...

Researchers identified the root of the problem in 1997:  patients were not expressing a functional copy of the enzyme ubiqutin-ligase E3A (UBE3A), which tags proteins in the brain for degradation, said lead author Benjamin Philpot, a neuroscientist at the University of North Carolina, Chapel Hill. As a result, several proteins accumulate to high levels in the brain, interfering with neuronal function.

In all people, the ube3a gene that codes for the protein is only expressed from the mother’s chromosome, because a missense transcript of the father’s gene represses translation of the father’s copy. Children with Angelman syndrome have inherited a copy of the mother’s ube3a gene that is somehow defective or deleted, leaving them with no way to produce the needed protein.

Because people with Angelman almost always have a normal copy of their father’s gene, Philpot and his colleagues wondered whether it was possible to turn on the functional copy to treat the disorder. The team tested cell cultures against over 2,000 compounds that are active within the brain or regulate epigenetic expression. They fluorescently tagged the father’s gene, so that “when the ube3a gene is expressed, the cells glow,” Philpot said.  Only one compound, which muted transcription of ube3a’s the missense transcript, caused the cells to fluoresce. Searching for other drugs that also quieted transcription of the repressor eventually led the researchers to 15 additional compounds that also worked in cell culture to activate translation of the father’s copy of ube3a.

The most promising compound, a lung cancer-drug called topotecan, turned on a fluorescently tagged copy of the father’s gene in transgenic mice, showing that the compound could reawaken the father’s silenced copy of the ube3a gene in vivo.

While another group has successfully turned on the gene using a viral vector, this is the first time that a non-viral vector-based drug has shown the same effects, Chamberlain said.

Still, several hurdles must be overcome, she added. There may be off-target effects once the researchers test the compound more extensively. Furthermore, the compound was able to get into the brain, but maybe not at high enough levels to cause neuronal recovery. Finding the right dosing will also be key.  Children suffering from Angelman lack a functional UBE3A protein, but children with autism have an overabundance of the protein. “It’s important to get the proper ube3a dose” because too much could cause autism-like symptoms, Chamberlain said.