The hundreds of thousands of people who enter into federal immigration custody in the US each year may soon have to provide a DNA sample when they arrive. The data from each sample would then be entered into a national criminal database, according to the proposed federal regulation being developed by the Department of Justice. The rule would also allow DNA collection from the more than 40,000 people already held in immigration detention facilities, The New York Times reports.

“Forced DNA collection raises serious privacy and civil liberties concerns and lacks justification, especially when DHS [the Department of Homeland Security] is already using less intrusive identification methods like fingerprinting,” Vera Eidelman, staff attorney with the American Civil Liberties Union’s Speech, Privacy, and Technology Project, tells The Wall Street Journal. “Moreover, it is worth considering the full intersection of the government’s asserted powers when we think about the consequences of it collecting such deeply sensitive, personal, identifying information about us and on such a massive scale.”

According to both the Times and the Journal, DHS officials explained to reporters in a phone call on Wednesday (October 2) that the regulation would improve immigration agents’ compliance with a 2005 law authorizing broad DNA collection from criminals and unauthorized immigrants, but there was an exemption for immigrants entering into the country legally. The proposal would allow DNA collection from immigrant children and asylum seekers at legal border crossing locations.

It is not the first time the US government has collected DNA samples from migrant children, which it did in 2018 to reunite migrant families.

In the call, according to the Journal, DHS officials noted that President Donald Trump’s administration wanted to move ahead with the regulation because it could help to identify immigrants who might commit future crimes.

It’s not yet clear when the regulation would be implemented, DHS officials said in the call, but the administration is working to have it ready as soon as possible. 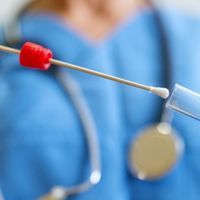