Anne N. Connor is a solutions-based science writer and editor based in Vermont. Her primary beats are climate change, the environment, and health. She has been writing about science for... 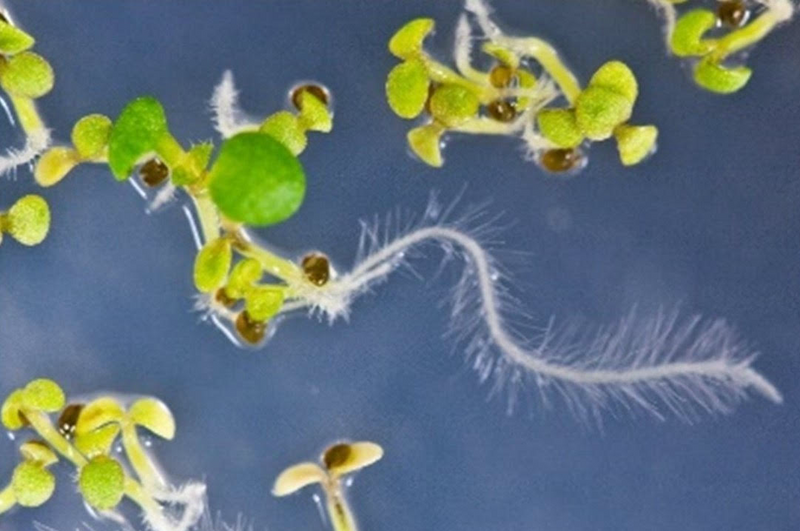 If climate change is the new normal, farmers in some regions of the world will have to get used to fighting mold and mildew. For wheat growers in particular, fungal blights are already a big problem—and only expected to worsen as weather patterns change. Fungal pathogens are advancing northwards at about 7 kilometers per year on average, worldwide.

Scientists around the world have been trying to make wheat, the most common crop on the planet, able to survive fungal diseases by introducing disease-resistant genes, but in the past, it has been difficult to add more than two or three of these genes at a time.

Enter the USDA’s Agricultural Research Service (ARS). On June 14, the ARS published a pilot study on an innovative...

Roger Thilmony, a research molecular biologist at the ARS, says his team inserted 10 genes into Arabidopsis plants—and that’s not the upper limit; theoretically, it could be far more. The genes were transgenic, making the Arabidopsis seedlings glow fluorescent colors so the researchers would know at a glance if the genes had been successfully inserted. However, genes from the same or related species that have some benefit, such as disease resistance, can also be swapped in. This will be important if GAANTRY is used to improve crop plants, which Thilmony says is the ultimate goal of his work.

Assembly within the Agrobacterium is something I hadn’t seen before.

Why gene-stacking? Multiple genes for disease resistance give plant immune systems a wider array of self-defense tools. That means wheat, potatoes, and other crops can be genetically engineered to tolerate heat, drought, diseases, and pests, the agricultural “four horsemen” of climate change.

GAANTRY is more efficient than previous stacking technologies because it cuts out the middle man, assembling genes directly into “disarmed” Agrobacteria (which then edit the plant’s genome), rather than relying on external gene couriers called binary vectors to shuttle genes to the bacteria. The stack is put together using alternating antibiotics to select for bacteria that take up the cargo genes. Agrobacterium is a soil bacterium that preys on plants, causing galls and “hairy root disease” by invading the plants’ DNA. It has been used in its harmless form for plant gene editing for the past 15 years.

GAANTRY performs well in terms of stability and reliability. “What you put into it stays there, and you don’t lose any of the cargo that you add,” says Thilmony. This is for two reasons: First, the ARS team knocked out a gene that would otherwise enable Agrobacterium genes to recombine. The less often that genes scramble, the less variation is introduced. Second, the cargo genes are loaded into the bacterium’s virulence plasmid, in the space where disease-causing genes were previously housed. Because virulence is how Agrobacterium made its living for eons, it has built-in mechanisms to keep genes in that plasmid stable.

Patrick Shih, a plant biologist at the University of California, Davis, previously developed another gene stacking method using yeast, which could self-assemble genes, but was dependent upon using specific recombination sites. He says GAANTRY addresses “something the other stacking technologies haven’t offered. . . . Assembly within the Agrobacterium is something I hadn’t seen before.”

Shih mentions that the GAANTRY stack was assembled in the Agrobacterium one gene at a time before inserting the 10-gene stack into plants, an approach that could be inconvenient if it were inherent to the system.

Thilmony says the GAANTRY system is not limited to stacking one gene at a time; developers can assemble stacks in the Agrobacterium using several genes at once. An iterative process just makes it easier to recover from problems during assembly, because genes can’t be deleted from the stack once they have been added. If there’s a problem with gene number nine, you don’t want to have to start over at step one to rebuild the stack. Instead, you could go back to the eight-gene version and start there.

Unlike transgenic GMOs, which introduce genes from other species, new “mutagenic” technologies such as GAANTRY and CRISPR allow scientists to introduce disease-resistant genes from within the same species. Developers of these approaches say it’s a faster and more precise way to achieve results than with conventional breeding techniques.

The USDA offered the GAANTRY technology to the world at no charge, but soon after the GAANTRY study was published, the technique and others like it were snubbed by an EU court that ruled for broader restrictions on genetically modified foods. Specifically, the EU no longer makes a distinction between mutagenic and transgenic gene editing. This means that crops modified by technologies such as CRISPR and GAANTRY are no longer allowed in the EU, unless they go through a rigorous and restrictive review process.

Sarah Gurr, a plant pathologist at the University of Exeter, is skeptical about whether GAANTRY is ready for prime time. “Arabidopsis is a little weed and it’s not a crop plant,” she says. “While it’s all fantastic stuff, it isn’t necessarily transferrable from a Brassica, which is what Arabidopsis is, into wheat, which is hugely complex genome-wise.” Although GAANTRY is a great concept, she says, “it’s far removed from getting it into a crop in a field.”

Thilmony and his colleague Jim Thomson, a plant geneticist at ARS, say that, while they haven’t conclusively demonstrated GAANTRY’s effectiveness on major crop plants yet, there are preliminary data showing that GAANTRY works in rice, citrus, and potatoes. They have also learned that different strains of Agrobacterium work better with different types of plants, and are exploring ways to optimize the pairing.

Gurr’s concern with stacking genes for fungal resistance is that pathogens can quickly overcome them. She has seen barley with five stacked genes (painstakingly built using traditional breeding) overcome by a powdery mildew fungus within three months. Zymoseptoria tritici, which causes wheat blotch, has a “very plastic genome,” and “mutates towards more virulence in just a few days,” she says. “If you stack them, it sounds great, but it still might be ephemeral.”