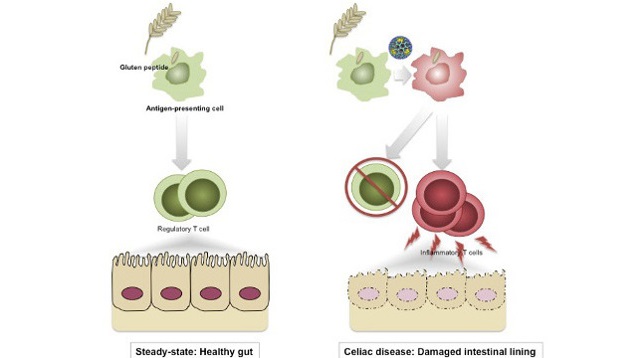 Left: Normally, a regulatory immune response blocks inflammation to dietary antigens. Right: When reovirus penetrates at the site where dietary gluten is present, it induces danger signals that confuse the immune system and lead it to develop an aggressive inflammatory immune response against gluten, which may trigger celiac disease.UNIVERSITY OF CHICAGO; VALÉRIE ABADIE, BANA JABRIOrally infecting mice with a human reovirus resulted in an immune response against gluten and led to symptoms of celiac disease in the rodents, researchers reported today (April 6) in Science. Reoviruses are prevalent in humans; while children are commonly infected with them, reoviruses are not known to cause disease in people. But the results of this mouse study suggest that a reovirus infection may spur development of celiac disease in certain individuals.

“It’s been hypothesized for decades that virus infection can trigger autoimmune processes. This study provides an example of that phenomenon...

An inflammatory immune response develops in the guts of individuals with celiac disease when they ingest foods containing gluten, a protein found in wheat. People with celiac disease have a genetic predisposition to gluten intolerance, but prior epidemiological data provided hints that environmental factors, including viral infections, are also associated with initiation of the disorder.

To test the role of a human reovirus in stimulating celiac disease, Bana Jabri of the University of Chicago Celiac Disease Center and colleagues orally inoculated mice with two different human reovirus isolates: type 1 Lang (T1L), which naturally infects the gut of both mice and humans, and a version of type 3 Dearing (T3D) genetically modified to be capable of infecting the intestine. While the animals cleared both viral infections, T1L infection resulted in higher levels of antibodies against the virus and an inflammatory immune response against dietary gluten or ovalbumin when the mice were fed a diet that included these proteins, Jabri’s team found.

Exposure of the mouse gut to a new, benign food antigen stimulated T-regulatory cells that prevent the immune system from attacking the antigen as it would a pathogen. But in the T1L-infected mice, the researchers saw evidence of an interferon response to both the virus and the dietary proteins responsible for blocking the normal T-regulatory cell pathway as well as an effector T-cell response against the dietary proteins.

In a mouse celiac disease model, T1L infection also derailed the animals’ gluten tolerance and resulted in an inflammatory response including the activation of the transglutaminase 2 enzyme, which increases the affinity of gluten for immune cells and is thought to stimulate pathogenesis.

“The authors tackled a really tough question here using elegant experimental design,” Julie Pfeiffer, a microbiologist at the University of Texas Southwestern Medical Center who was not involved in the work, wrote in an email to The Scientist. “Using two reovirus strains with different inflammatory phenotypes was absolutely key, allowing the authors to untangle a wide array of potential confounding variables.”

“We now have a clue that reovirus might be one trigger for celiac disease,” said study coauthor Terence Dermody, chair of the department of pediatrics at the University of Pittsburgh School of Medicine in Pennsylvania. “The potential mechanism is that when gluten is introduced right at the time that an asymptomatic reovirus infection is taking hold, that causes the immune system to treat the gluten as foreign, eliciting an immune response against it.”

“Reovirus infections occur and are cleared with no symptoms early in life and that is why we think our results are meaningful,” Jabri told The Scientist. “We expect children to already be infected at the time they are introduced to gluten.”

Analyzing samples from patients with celiac disease, the team found higher levels of anti-reovirus antibodies in people with the disorder compared to those without it. Follow-up study is required, the researchers noted, as there was no clear correlation of antibody levels and evidence of an inflammatory response.

“If confirmed by clinical studies, this link between celiac disease and reovirus is exciting because it identifies a possible target for vaccine prevention,” said Alessio Fasano, a pediatric gastroenterologist who studies celiac disease at the Massachusetts General Hospital for Children in Boston and who was not involved in the work. “At the same time, it’s disappointing because vaccine prevention in individuals with asymptomatic viral infections who are at risk of celiac disease would be challenging.”