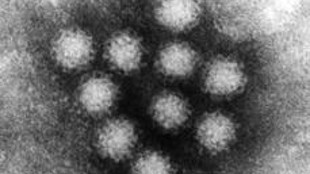 WIKIMEDIA, GLEIBERGLike the human gastrointestinal tract, the mouse gut is home to beneficial bacteria that help boost the host immune system and ward off pathogens, among other things. Wipe out this commensal microbiome, and the mice are more susceptible to intestinal injury and infection. But the presence of murine norovirus (MNV) appears to recover some of these beneficial functions in the guts of germ-free or antibiotic-treated mice, according to a study published in Nature today (November 19).

Specifically, Ken Cadwell of the Skirball Institute of Biomolecular Medicine at New York University’s Langone Medical Center and his colleagues found that MNV infection in germ-free and antibiotic-treated mice helped repair morphological defects within the intestine related to the lack of bacteria and boosted the production of immune cells and signaling molecules there.

“It’s as if we took these germ-free mice and gave back their [beneficial] bacteria,” Cadwell told reporters during a...

“[That] an intestinal virus can have beneficial effects for the host [has] never really been shown before, at least for mammalian viruses,” said Julie Pfeiffer, a microbiologist at the University of Texas Southwestern Medical Center who was not involved in the work but coauthored an article accompanying the study. “They’re generally thought to be pathogenic.”

Unlike human noroviruses that can cause gastroenteritis, the MNV strain the team homed in on (MNV.CR6) does not typically make mice sick, so it can persist unnoticed in the mouse gut for extended periods of time. “A lot of labs use this MNV strain to study human noroviruses because they display very similar properties at the molecular and cellular level,” Cadwell told The Scientist. “But at the disease level, MNV is quite different because the human viruses usually—but not always—come in, wreak havoc, then leave.” In contrast, the murine virus “can stick around for quite a long time, maybe even the entire lifetime of the mouse,” he said, while not causing the animal overt harm.

The team next aims to understand how this virus protects its host, and to determine whether there are viruses in the human gut that are similarly beneficial. But compared to studies of the bacteria, fungi, and archaea that inhabit the gut, characterizing the virome has proven challenging.

“We know quite a bit now about the intestinal microbiome, but the virome has lagged behind, partially due to technical reasons,” said Pfeiffer. “It’s more difficult to analyze the virome because viruses . . . are not going to be picked up by normal sequencing approaches. If you’re not looking for them, you won’t see them.”

Identifying the key components of the virome is “like finding a needle in a haystack because the viruses have small genomes, and so when you try to sequence everything that’s there you’re going to get a lot of bacteria and a lot of human or mouse DNA as well,” agreed Cadwell. “There are also huge differences between different viruses,” he added, “so when you just look at a sequence it’s very difficult to know that it actually came from a virus.”

Going forward, researchers hope that better understanding the composition and functions of the virome could lead to diagnostic and therapeutic targets for microbiome- and virome-associated diseases like inflammatory bowel disease and obesity, Cadwell said. “[MNV] is really the first example of an animal virus that behaves like friendly bacteria in the gut. . . . If we understand this relationship between us and the viruses better, we will be able to come up with better treatments.”