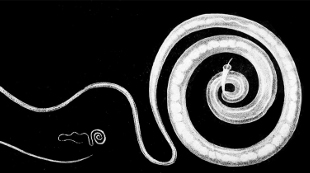 Trichuris trichiura, which is related to T. murisWIKIMEDIA, DELORIEUX/JOHANN GOTTFRIED BREMSERVitamin A deficiency is associated with several health problems including night blindness and increased asthma risk. And as with other nutritional deficiencies, it is also known to compromise adaptive immunity mediated by the specialized T cells of the immune system. So it came as a surprise when researchers found that vitamin A deficiency could also activate the immune system and help protect mice against worm infections. Their work was published in Science today (January 23).

Yasmine Belkaid from the National Institute of Allergy and Infectious Diseases and her colleagues were examining the effects of vitamin A deficiency on the intestinal populations of two types of mouse innate immune cells—innate lymphoid cells 2 and 3 (ILC2, ILC3), which play major roles in maintaining “barrier immunity,” the first line of defense at surfaces exposed to the environment, such as...

Describing the work as “an elegant series of experiments,” Richard Grencis, a professor of immunology and microbiology at the University of Manchester who was not involved in the work, told The Scientist in an e-mail that “a traditional hallmark of an innate immune response is that it does not change—does not adapt—regardless of how many times it is activated. This work clearly challenges this view, but with a novel slant.”

Vitamin A deficiency is among the most prevalent nutritional deficiencies the world over; around 250 million children in developing countries suffer from it. At the same time, parasitic worm infections are prevalent in these regions. It is well known that a lack of dietary nutrients, including vitamin A, can increase one’s susceptibility to infection. However, investigations of vitamin deficiencies and infection risk to date have been “mostly in terms of the adaptive response—that is, the response activated once our first line defence system, the innate immune system, has been breached,” explained Grencis.

Other groups had previously shown that retinoic acid promotes adaptive T cell responses. So Belkaid and her colleagues hypothesized that there might be cross talk between dietary factors and the innate immune system that guards barriers to the environment, like the intestine, enabling individuals to survive even under conditions of malnutrition. To investigate this possibility, they looked at innate lymphoid cells, which constitute a part of innate immunity but secrete several signaling molecules (cytokines) typically associated with T cells from the adaptive arm of the immune system.

For the present study, the team fed 14-day pregnant mice a special vitamin A-deficient diet and then kept their offspring on the same regimen to generate vitamin A-deficient mice. They then analyzed cells from the small intestines of these and normal mice, finding that while both ILC3 cells and their associated cytokines were significantly reduced in the vitamin A-deficient mice, the levels of ILC2 cells and their associated cytokines had gone up. The researchers found that inhibition of retinoic acid signaling had the same effect on normal mice, suggesting that vitamin A levels were affecting the populations of immune cells in the small intestine.

The authors also investigated the influence of retinoic acid in another way, by introducing undifferentiated progenitor lymphoid cells into mice lacking innate lymphoid cells and observing the quantities of ILC2 and ILC3 cells that emerged in the gut. They found that introducing retinoic acid to the mice intraperitoneally led to a dominant population of ILC3 cells in the gut, while inhibition of retinoic acid signaling led to a preferential accumulation of ILC2 cells. Overall, the authors suggested that varying levels of vitamin A could promote different types of immunity.

While both ILC2 and ILC3 cells play a role in innate immunity, the latter are known to help defend against bacterial infections, and to proliferate in response to retinoic acid exposure. Consistent with this, the researchers found that mice treated with a retinoic acid signaling inhibitor did poorly compared with normal mice when challenged with the bacterium Citrobacter rodentium.

ILC2 cells, on the other hand, are known to help fight worm infections. The researchers found that progenitor lymphoid cells deprived of the retinoic acid receptor preferentially differentiated into ILC2 cells. To investigate how these cells behaved under vitamin A deficient conditions, the researchers experimentally infected normal, vitamin A-deficient, and retinoic acid inhibitor-treated mice with a parasitic worm by oral introduction of Trichuris muris eggs. Fourteen days later, they measured the worm load in the cecal epithelial layer of each mammal. Both vitamin A-deficient and retinoic acid inhibitor-treated mice showed lower worm loads compared with their normal counterparts, accompanied by elevated ILC2 cell counts.

“To our knowledge this is the first study to show a beneficial adaptation of the immune system to nutritional deficiencies,” Belkaid said.

The authors speculated that their observations also suggest an adaptation to maintain nutrient levels within the host by reducing competition from the parasite. However, this theory has yet to be tested.

Among the remaining questions, one stands out to Ohio State University’s Linda Saif, who was not involved in the work. “Will treatments to alleviate vitamin A deficiency enhance worm burdens while protecting against other enteric pathogens?” she asked.