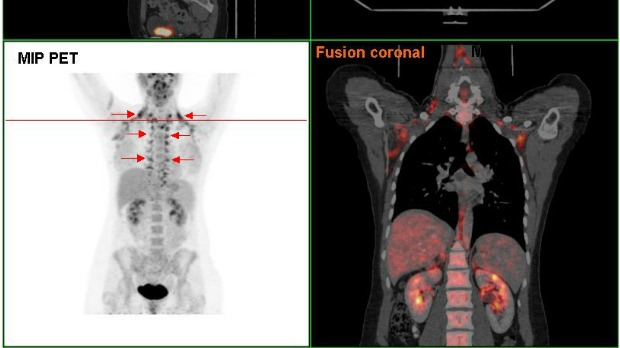 Arrows indicate where most brown fat is found in the human body.WIKIPEDIA, HGG6996

Brown fat—the form of adipose tissue that burns, rather than stores, energy—was only recently discovered to exist in adult humans. For decades, researchers knew it was present in rodents, whose brown fat reserves are quite large. But it wasn’t until the advent of PET-CT scans that allowed scientists to finally image brown fat in people, about six years ago.

"If we are honest, we still don’t know what the function is of the brown fat, especially in humans,” says Patrick Schrauwen, who, along with his colleagues at Maastricht University in the Netherlands, was one of the first researchers to identify brown fat in adult humans. But scientists do know what the tissue is capable of: chewing up calories. This property has made brown fat a tantalizing target for obesity therapies. The question is, Schrauwen adds,...

In animals, researchers had found years ago that cold fires up brown fat, likely to regulate body temperature. So in Schrauwen’s early experiments to look for brown fat in humans, he asked a group of young, male volunteers to sit in a cold room (16° C) for two hours. In this condition, brown fat would light up in the scans, but at room temperature, it was not visible.

The results demonstrated that it was possible to manipulate brown fat via cold exposure, but would it be enough to produce any benefits?

In 2013, Masayuki Saito of Tenshi College in Japan and his colleagues put cold to the test. The team had a small group of volunteers sit in a cold room (19° C) for two hours each day for six weeks. Not only did PET-CT scans show increased brown fat activity, but the study participants’ body fat mass also dropped by a few percent, while control volunteers showed no such changes.

Although cold may be a powerful stimulant for brown fat, “it’s not so feasible,” says Schrauwen. “People are not going to sit for two to three hours per day in a cold room. They don’t have time.” One company is developing cooling clothing people could wear to stimulate their brown fat, but even then, researchers say the key to flipping the switch on brown fat is feeling the chill. “It is extremely uncomfortable,” says Harvard Medical School’s Bruce Spiegelman. “So compliance is an issue.”

What scientists like Spiegelman really want to develop is a brown fat medicine.

The beleaguered quest for a fat-burning pill has spanned decades, with few successes and a handful of huge flops (think: methamphetamine given to postpartum women in the 1940s, and fen-phen’s ban in the 1990s after its potentially fatal side effects were exposed). But no drug-development attempts to date have specifically targeted brown fat, leaving room in the imagination for a safe, effective, and long-lasting weight loss medication.

There are a number of ways of turn on brown fat by ramping up any of the various players involved in the cells’ activity. For instance, through the binding of a receptor called TGR5, bile acids induce brown fat cells to burn calories. Earlier this year, Schrauwen showed that giving women a pill containing the bile acid chenodeoxycholic acid for two days did indeed up their energy expenditure and brown fat activity. “The results were not spectacularly high,” he says. “They were quite small effects. But if the pharmaceutical industry would design more specific TGR5 agonists, this might be the way to go.”

Another target is UCP1, or mitochondrial uncoupling protein 1, which causes brown fat cells to produce energy via heat rather than ATP. Wanzhu Jin at the Institute of Zoology at the Chinese Academy of Sciences in Beijing is screening chemicals in mouse models of obesity in search of those that turn on UCP1. He has been dosing himself with one such promising compound, used in traditional Chinese medicine, for months. So far he hasn’t observed any side effects, but he hasn’t witnessed any weight loss either.

Rather than breaking new ground with novel compounds, some researchers are repurposing old drugs known to stimulate players on the brown fat activation path, with an eye toward honing their specificity.

Patrick Rensen at Leiden University Medical Center in the Netherlands, for instance, is reviving interest in a weight-loss drug called rimonabant that had already been on the market, but was pulled for psychiatric side effects. Rimonabant is known to effect weight loss by binding a cannabinoid receptor, but the mechanism wasn’t entirely unclear. Rensen and his colleagues last year showed that the drug works by increasing noradrenergic signaling in brown fat when the cannabinoid receptor is turned off. If it were possible to develop a form of rimonabant that couldn’t cross the blood-brain barrier, he says, such a drug might be promising.

Also on the drug-repurposing hunt is Aaron Cypess of the National Institute of Diabetes and Digestive and Kidney Diseases. He’s studying β3-adrenergic receptor agonists—drugs known to both turn on brown fat and encourage white fat to release fat into the blood. In the 1980s and ’90s, such drugs had been tested for weight loss in clinical trials, but they didn’t effect significant results, and fell out of favor. But that was before it was recognized that they were acting upon brown fat, says Cypess. “People say, ‘This will never work as an obesity treatment.’ My answer is, ‘We haven’t really seen what this tissue can do, because we haven’t tested in remotely analogous conditions to what we test in our mice.’”

Cypess is now experimenting with a β3-adrenergic receptor agonist, mirabegron, which is approved to treat overactive bladder. In January, his team showed that a single, large dose of the drug activated brown fat in adults. The next question is whether chronic activation can produce lasting metabolic or weight benefits.

Spiegelman, who is pursuing a number of different brown fat-activating compounds, says drugs that both turn on existing cells’ activities and recruit new brown fat cells will be the most effective. “A number of polypeptide small molecules play some role in the browning/beiging response in vivo,” he says. “Which of these are going to be robust enough to be effective in humans is something we don’t know at this point.”

One of the challenges of activating brown fat in people is that adult humans have so little of it to begin with—just a few hundred grams, estimates Rensen. And among overweight and obese individuals, that amount tends to be even smaller. But what if we could boost that volume?

Jin has had success transferring brown fat from one animal to another. The recipient mice ended up with better insulin sensitivity, resistance to obesity, and, in the case of already overweight animals, signs of obesity reversal. But he says such an approach would not work in humans. For one, people don’t have the large brown fat depot that mice do. Spiegelman says a transplant would require so much volume that it’d essentially be a surgical procedure. (If a person is willing to undergo surgery for weight loss, he says, she might as well get bariatric.)

Rensen, too, has tried implanting brown fat into mice, but without success. He says the trouble is that brown fat is innervated with noradrenergic neurons, and without the nerve cells present among the donor brown fat cells, they turn into white fat. Still, he says, there’s a chance it still might work. “As long as it is not proven it doesn’t work, it’s still promising.”

A Massachusetts-based biotech called Energesis Pharmaceuticals is working on a different solution to boosting brown fat. It’s developing a procedure to take a bit of fat precursor cells from a person, grow them in the lab, add a compound to differentiate the cells into brown fat, and reinfuse them back into the patient. “We have very good results in mice,” says Olivier Boss, the firm’s chief scientific officer.

Energesis estimates it may be able to test the procedure in humans in 18 months. In the meantime, the company is also screening compounds that activate existing brown fat. In either case, says Boss, metabolic benefits are likely to show up first before any substantial weight loss. “My expectation is that it will be sufficient for a lot of patients [to lose weight]. But it’s going to take time.”

Time is something investors don’t always have, creating a challenge for those wishing to develop a brown fat drug that could treat obesity. Spiegelman founded a company called Ember Therapeutics several years ago, but despite preclinical success with several compounds, he says, its primary investor pulled out and shuttered the company. “We were making good progress, but we weren’t making it fast enough,” he says. “I still believe in” a brown fat therapy.

Spiegelman says he’s in discussions with another investor to continue his work on developing a brown fat drug for diabetes and weight loss. Like Boss, however, he acknowledges that obesity may be a tougher nut to crack. “I’m much more optimistic about activation of brown fat for diabetes and fatty liver disease. Whether we can achieve enough weight loss as a monotherapy, that’s a high bar,” Spiegelman says.

Studies on activating brown fat in humans are still so new that there aren’t enough data to say one way or another if it’s feasible to stimulate weight loss by turning the cells on.

Cypess envisions a therapy that would complement existing strategies, namely, exercise and limiting energy intake. “You’re not going to have a diet-in-a-pill,” he says. But he remains optimistic about the promise of brown fat. “We really haven’t pushed the capacity of brown fat in humans yet.”