About 252 million years ago—at the end of the geologic period known as the Permian—roughly 96 percent of marine animals were lost in the largest extinction event in Earth’s history. Around that same time, in what is now Siberia, ongoing volcanic eruptions released massive amounts of greenhouse gases into the atmosphere, causing rapid increases in temperatures worldwide. Until now, scientists have been unsure which aspects of the changing climate were the greatest contributors to the mass extinction.

In a study published today (December 6) in Science, researchers combine models of animal metabolism and the conditions in ancient oceans to attribute what’s called the Great Dying to two main causes: ocean waters heating up and losing oxygen. While current climate conditions are nowhere near as severe as they were during that time period, the burning of fossil fuels has already led to a loss of oxygen...

“It was nice to see that the model appeared to pretty reasonably reproduce what we see in the rock record at the end of the Permian,” says Gregory Brennecka, a geochemist at the University of Münster in Germany who was not involved in the study. “When we transfer what’s going on in that model to modern times, it’s a bit scary to think that we’re maybe on that path. Obviously, expanded anoxia and increased temperatures in the modern ocean are not really good things.”

It’s the best stab yet at getting at the what the oceanic conditions were.

In 2015, coauthor Curtis Deutsch of the University of Washington and colleagues published work that linked lab and field data to predict how the habitats of existing marine animals could be restricted by a loss of dissolved oxygen and warming waters in modern oceans.

After hearing Deutsch discuss the prior study, Justin Penn, a graduate student in the group, decided to investigate whether there was a connection between his mentor’s work on animal survival in modern oceans and the fate of marine organisms in past oceans, specifically, during the end of the Permian. Penn thus merged climate modeling that he was learning as part of a graduate school course with Deutsch’s predictions of how oxygen supply and demand affect the geographic ranges of marine animals.

“The geological record, which is really the chemistry of rocks, tells us a couple of important and tantalizing things about the past, but it’s very sparse information,” says Deutsch. “The climate simulations that Justin did . . . filled in from, if you like, two data points to thousands and thousands of data points that we then had about what the oceans probably looked like.”

Penn designed the simulations to be consistent with information from the geologic record—in particular, predictions of surface water temperatures over a couple million years in one location and an estimate of how much of the very deep ocean was completely devoid of oxygen. He then combined that model of changing ocean conditions at the end of the Permian with information about the physiological traits of modern species—namely, the lower limit of oxygen levels before the animals start to have trouble surviving. Although the authors acknowledge in the study that today’s animals are not the same as those present millions of years ago, by grouping species based on their sensitivity to oxygen levels, they ended up with categories of animals that were likely representative of those present long ago.

The simulations showed that increasing temperatures leading to a corresponding loss of oxygen in the oceans appeared to account for the widespread extinction of all the marine animals that couldn’t adapt. It also looked as though species nearer the equator, which likely were already better adapted to living in warmer and lower-oxygen waters, went extinct at lower rates than animals closer to the poles, which likely had a lower tolerance for losing oxygen and could not escape from intolerable conditions. Comparisons to the fossil record appeared to confirm the model, with greater species loss happening at higher latitudes. 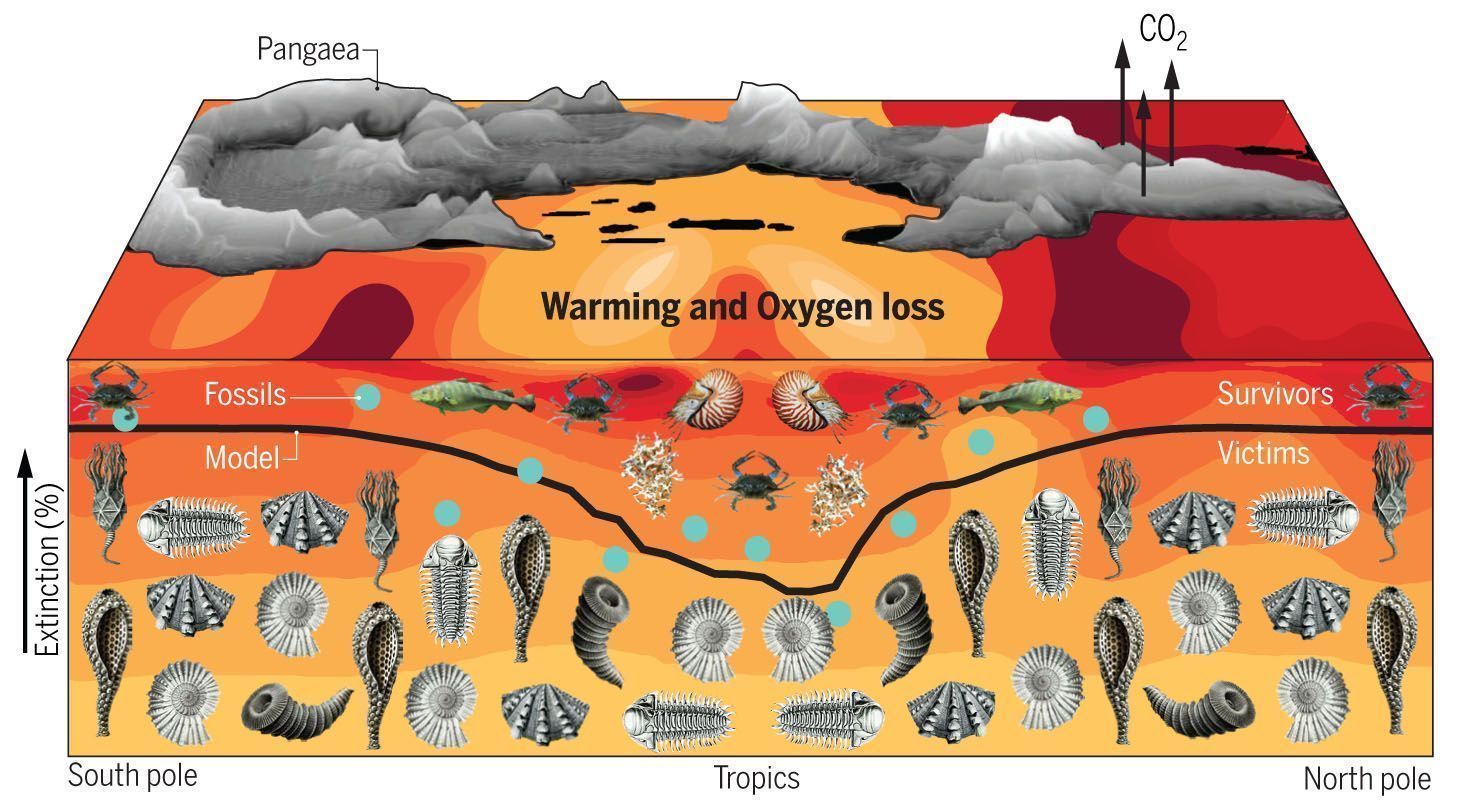 An illustration depicting the percentage of marine animals that went extinct at the end of the Permian era by latitude, from the model (black line) and from the fossil record (blue dots). The color of the water shows the temperature change, with red representing the most severe warming and yellow less warming. At the top is the supercontinent Pangaea, with massive volcanic eruptions emitting carbon dioxide. The images below the line represent some of the 96 percent of marine species that died during the event.
JUSTIN PENN AND CURTIS DEUTSCH, UNIVERSITY OF WASHINGTON

“Modelers have always found it very hard to generate near-whole-ocean anoxia or low-oxygen levels and this model comes quite close, so it’s the best stab yet at getting at the what the oceanic conditions were,” says Paul Wignall, a paleontologist at the University of Leeds in the UK who did not participate in the work.

Wignall adds that his work and analyses by others to determine the causes of the Permian extinction are consistent with the role these authors found for a rapid increase in temperature and ocean anoxia. But he is hesitant when it comes to the study’s claims about increased extinctions toward the poles because he says that there is not as much relevant evidence at high latitudes in the fossil record and that some extinctions for which there is evidence could have happened earlier in the Permian.

“There is a lot more to do for high latitudes,” agrees Yadong Sun, a geologist at Friedrich-Alexander University Erlangen-Nürnberg in Germany who was not involved in the study. He explains that the geological record is less complete for higher latitudes because fewer people have traveled to relevant sites—in Greenland and Russia, for instance. Plus, much of the sedimentary evidence has been sucked back below the ocean floor at higher latitudes. “It’s something open to future studies,” he says.

For Deutsch, the excitement of being able to gather this information about the past is strongly tempered by corresponding hints about the direction of Earth’s future. “The changes that happened back then to cause this extinction are underway,” he says.

“We know that . . . nearly all extinctions, all crises, correspond with phases of rapid global warming,” Wignall says. “I’m often asked whether we’re recreating an end-Permian mass extinction today, to which the answer is, not any time soon, but it’s not impossible in the next few millennia. Even ten percent of an end-Permian extinction scenario will be bad, so even if we only get partway down the road to the conditions at the end of the Permian, they will still be rather awful conditions.”