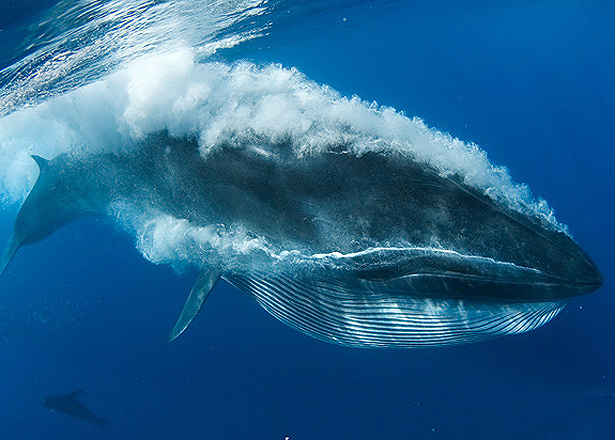 FLICKR, AMILIA TENNAKOONWhen a fin whale opens its mouth to feed on krill, the behemoth takes in more water than food—sometimes even more water than the volume of its entire body. To accommodate such expansion, the cetacean has a pouch at the bottom of its mouth that expands rapidly.

“The pouch stretches, and everything that is in it—all of the wiring, plumbing, and nerves—need to be able to accommodate an increase in length,” said Margo Lillie, a research associate at the University of British Columbia. But just how nervous tissue could endure whale gulping without injury wasn’t clear.

In a study published February 16 in Current Biology, Lillie and colleagues have discovered that these whale nerves stretch without causing permanent damage due to two levels of “waviness”—switchback curves, essentially—within their fibers. The main level of waviness, which has been observed in mammalian nerves before, effectively coils the...

Micro-CT scan of a fin whale nerve, displaying both levels of “waviness.”  The first level looks like a meandering stream of blue in the center of the nerve. The second level looks like tiny bundles within the river.MARGO LILLIE

“This elegant and technically impressive study provides a particularly dramatic example of the fact that nerves, like more typical orthopedic tissues such as ligaments, tendons, and muscle, experience substantial mechanical loads during movement,” said Sameer Shah, a neuromuscular bioengineer at the University of California, San Diego, who was not involved in the study. “This is important in our understanding of how and why nerves are designed the way that they are.”

Lillie’s team had collected seven Balaenoptera physalus specimens from a commercial whaling station in Iceland. While cutting into samples of the specialized whale nerves during an initial analysis, Lillie said, she was struck by the odd shape of the core. The slack nerves appeared to be coiled so tightly that even the act of recoiling itself could cause damage. It’s “like trying to bend a pool noodle,” Lillie said. “When we cut open [these whale nerves] you could see an awful lot of waviness,” Lillie said. “It was at that point that I realized that we had been thinking in terms of one level of waviness, the kind any mammal would have. So we went to the micro-CT scanner.”

Using the machine, a higher-resolution, longer-exposure version of normal computed tomography scanners, Lillie and colleagues scrutinized seven samples of these nerves, and found that the nerve core tends to coil in the shape of a “meandering river”, as Lillie put it, or a sine-generated curve. “As expected, we saw that the core was wavy, which allows the nerve to get longer,” Lillie said. “But then inside, unexpectedly, we saw a second level of waviness—inside the core, a bunch of fascicles were wavy, too.” They concluded that the first layer of waviness allows the nerve to stretch for feedings while the second layer of allows the nerve to recoil tightly afterward.

“Neurons are exposed to various mechanical forces,” said Daniel Suter, a neuroscientist at Purdue University who was not involved in the research. “This study provided new insights into how the nervous system anatomically adapted in these huge animals to prevent stretch injury during normal feeding behavior.”

Lillie echoed Shah’s notion that her work could shed light on how nerves develop. “Since this is a really extreme case, we can now ask questions about nerves that we didn’t think of asking before,” Lillie said. “In recent years, there has been a lot of interest in how nerves grow and respond to stress. This is not something we can figure out from this study, but at least now we know what questions to ask.”

James Phillips, a tissue engineer at University College London who was not involved in the study, noted that human nerves could also become permanently damaged if they are stretched too far or too fast. “The rorqual whale study is a fascinating insight into nerve biomechanics,” he said. “It may help with our understanding of how nerves can accommodate extreme elongation, and it may also provide ideas for tissue engineers seeking to fabricate artificial nerve tissue for use in regenerative medicine.”