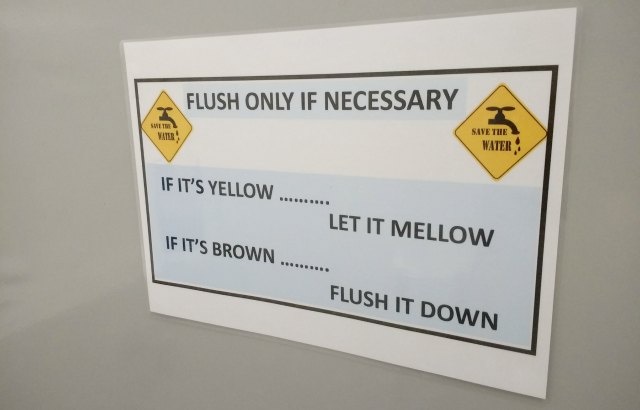 A sign at the University of Cape TownLINDA NORDLINGJanuary to March is the busiest time of year for the University of Cape Town’s mouse-breeding facility, as researchers return from their summer break and place orders for their experiments. But this year has been more stressful than usual for Jabu Magagula, the facility’s manager. He’s been tasked with an almost impossible job: meeting researchers’ demands without access to free-flowing water.

Cape Town is dangerously close to running out of water. The South African city, home to more than 4 million people, is in dire straits as a result of poor rains and rising demand. Things got so bad in January that local authorities announced they would turn the taps off city-wide in April, forcing residents to queue for drinking water at municipal collection points.

Although “Day Zero”—when the taps run dry—has since been pushed back to July,...

Last year, Magagula and his colleagues embarked on a water audit. They realized there were easy ways to reduce consumption that weren’t expensive or labor-intensive, while still keeping thousands of mice in the facility pathogen-free and well cared for. For example, the lab now only runs its washing machines and autoclaves when they are full. They also let the mouse cages soak in vats instead of under running water to loosen the dirty sawdust. 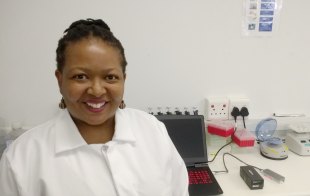 Kenalemang Ntlhokoa is a “water warrior” at the Centre for Proteomic and Genomic Research in Cape Town.LINDA NORDLINGMagagula expects to be able to save even more of the precious resource by modifying the autoclaves to recycle the water they use. It will cost a bit of money, but it could almost halve the lab’s water consumption all over again, he says. “I hope we can go as low as 8,500 liters per week.”

There is a lot of innovation happening at the university as a result of the water crisis, says Valerie Mizrahi, director of the Institute of Infectious Disease & Molecular Medicine (IDM) at the university. “Foremost in our minds was the integrity of research, and health and safety issues,” she says. Still, a lot of water has been saved without compromising these essential aspects of science.

Often it’s just about being aware of water as a finite resource. Sophia Gessner, a postdoc working on tuberculosis transmission in Mizrahi’s research unit at IDM, saved big on biocide dips to clean instruments in her biosafety level 2 lab. “We used to get a bucket per person each morning, made up for us by our lab technicians. Now, we make up our own as we need it, and we share,” she says. Social media is also proving helpful, she adds. There’s a WhatsApp group for the autoclaves to make sure they only run when they are full.

Many departments in the university have appointed water-saving officers. In the IDM, her name is Berenice Arendse, who also heads up health and safety. The institute has shut down three ice machines, she says, and the reverse osmosis machines producing lab-grade water for sensitive experiments have been fitted with tubs to catch the runoff, which is now used for cleaning.

The IDM is also busy installing smart water meters for its departments and laboratories, part a university-wide push to understand its water use. “You can’t manage what you can’t measure,” says Kevin Winter, a scientist who heads up a university-wide water task force. Considerable effort has also gone into sensitizing students and staff to the new normal—only flushing toilets when necessary (if it’s yellow, let it mellow, in other words) and fitting water restrictors to taps. 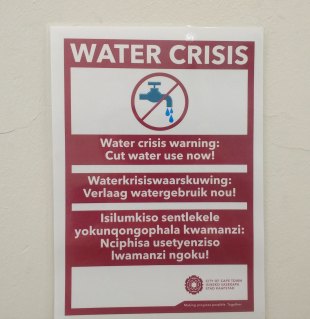 A sign at the University of Cape TownLINDA NORDLINGIt hasn’t been difficult to change behavior, says Kenalemang Ntlhokoa, the water saving officer at the Centre for Proteomic and Genomic Research, an independent facility affiliated with the University of Cape Town. Earlier this year, as the situation became dire and the projections for water availability deteriorated, people began saving water by themselves, she says. Her lab has bought freezer beads to replace ice for keeping samples and DNA cool.

News that Day Zero has been set back to July comes as a relief to Magagula and his embryologist colleague Kerith Coulson. By then, the winter rains should have set in, replenishing the reservoirs on which the city depends. The genetic strains of mice bred in their facility exist nowhere else, they say, and without them, research—much of it on tuberculosis—would have to be abandoned. “We could freeze them, but it wouldn’t be ideal,” says Coulsen.

Others are still planning for the worst. It’s still technically possible that Day Zero will happen, says Jonathan Blackburn, who runs a proteomics lab at IDM. “I figured it was better to plan that it will happen and be surprised if it doesn’t,” he says. His lab uses little water for scientific purposes—most of the work is done on equipment such as mass spectrometers, which use miniscule amounts per experiment. Blackburn reckons he could fly water in from another province to keep those experiments running, at a push.

The challenge is cleaning and waste disposal, he says. He has ordered disposable plasticware to replace glassware in experiments. And like most labs around the university, he has ordered huge quantities of hand sanitizer to replace hand washing. In the near future his lab will do a “Day Zero dry run,” when staff will be banned from using tap water. This would only last a day or so, to see how the lab would cope. But perhaps a truer scenario would simply be an idle, empty lab. After all, if Day Zero arrives, staff might not be able to come into work, Blackburn says. “They will be queuing for drinking water.”

Correction (February 28): The fifth paragraph originally stated that the autoclave water will be recycled from equipment tests, but recycling is not limited to tests only, so we removed that language. The Scientist regrets the error.