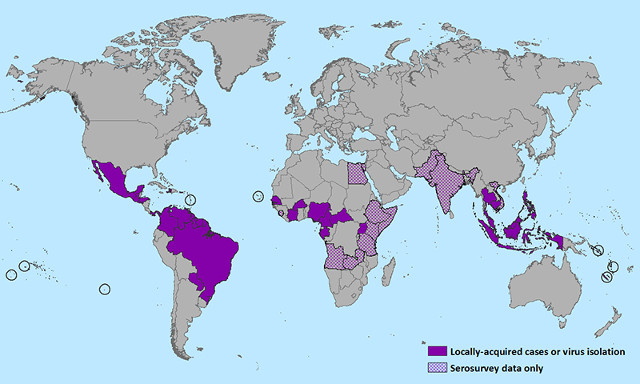 Zika virus distribution as of January 15, 2016WIKIMEDIA, CDCViral immunologist Eva Harris has been tracking dengue virus infections in Nicaragua for more than two decades. During the last nine months, her lab has taken on more than 40 new projects, all related to Zika virus. Many of these latest studies take advantage of blood samples donated as parts of various dengue surveillance projects, including one cohort of 3,500 Nicaraguan children who have given blood annually for several years. This cohort and others like it are providing researchers with an inside look at of how Zika spreads in a naive population, and how it interacts with dengue. “We can now analyze Zika infections in children who we know have had a previous dengue infection or not,” said Harris, a professor of infectious diseases and vaccinology at the University of California, Berkeley School of Public Health.

“Is it true that there hasn’t been Zika around the world?” asked Isabel Rodriguez-Barraquer, an epidemiologist at the Johns Hopkins Bloomberg School of Public Health in Baltimore.  “Or has it been there, but we haven’t found it?”

Rodriguez-Barraquer and colleagues are looking for antibodies against Zika in 10,000 blood samples from ongoing dengue studies in Colombia, Thailand, India, and parts of Africa. The US National Institutes of Health (NIH) and the Thai Armed Forces Research Institute of Medical Sciences, meanwhile, will add retrospective and prospective Zika surveillance to existing dengue cohort studies in Kamphaeng Phet. Information about underlying immunity to Zika among people in these parts of the world is not only important for assessing these countries’ risks of future outbreaks, explained Hopkins epidemiologist Justin Lessler: it could also improve estimates of how many people have been infected in the current epidemic.

Several obstacles have prevented useful estimates of Zika background immunity around the world. Firstly, “since it was thought of as a very mild virus, people were not looking for it as much,” said Rodriguez-Barraquer. But the biggest challenge, by far, said Lessler, is the lack of an inexpensive and easy-to-use serological test.

Antibodies against Zika, dengue, and other flaviviruses are notoriously cross-reactive. When someone contracts Zika in a dengue-endemic area, such as Brazil and Nicaragua, current diagnostic tests can’t distinguish between antibodies made against the two viruses.

Currently, researchers and health care providers rely largely on clinical symptoms and positive antibody tests to diagnose acute Zika infections. They can also reasonably distinguish antibodies made during a new Zika infection from those made against dengue years earlier, since IgM antibodies are made in the first weeks of an infection before they’re replaced by IgG. But none of these approaches are helpful for measuring immunity in areas where Zika has come and gone, or where most people may contract this infection early in life.

Rodriguez-Barraquer’s team plans to use an assay being developed by the Pasteur Institute in Paris. It uses microbeads coated with antigens representing specific regions of the envelope protein found on flaviviruses. The assay includes only antigens from Domain 3 of the envelope protein, explained Jessica Van Homwegen, a postdoctoral researcher at the Pasteur Institute who has been working on the test for two years. “Domain 3 is sufficiently different [among flaviviruses],” she told The Scientist. Each batch of beads also fluoresces at a unique wavelength, corresponding to a specific virus, so the levels of antigen-bound antibody and the bead “color” can be read in real time.

In one study, Van Homwegen and colleagues demonstrated that this approach could distinguish antibodies against West Nile, Japanese encephalitis, and tick-borne encephalitis viruses in horse sera. Her team is now collaborating with groups like Rodriguez-Barraquer’s to test whether the assay can detect flavivirus co-infections or distinguish primary infections from secondary ones.  Public health institutes in French Polynesia and Brazil are now using the Pasteur Institute’s test for disease surveillance, and Van Homwegen’s team plans to work with a commercial partner to seek US Food and Drug Administration (FDA) approval of a clinical test in the next year.

Harris said that, because it includes samples taken over time from individuals with only dengue, only Zika, or dengue and then Zika, the Nicaraguan cohort is ideal for validating antibody-based tests. Her team is now using an assay that measures how well sera can compete with a Zika-specific monoclonal antibody for binding the Zika protein NS1. The less monoclonal antibody they detect in the assay, the more Zika-specific antibody is present in the sera, Harris explained.

In July, she and her colleagues showed that the test could distinguish Zika- and dengue-specific antibodies in a handful of patients. Some of Harris’s collaboratorshave now established the assay in Nicaragua, where they are testing samples from patients with RT-PCR–confirmed infections. The team plans to test the ability of the method to detect antibodies weeks and months after infection.

To inform researchers about the longevity of immune responses to Zika and its potential to induce herd immunity, any new serological assay will have to work months or years after infection. “We would hope the response is long-lived,” said Rodriguez-Barraquer, “but you can’t know that for sure unless you follow up over time.”

“Getting serological data in the aftermath of a Zika epidemic is probably the single most important thing that needs to be done in terms of data collection,” according to Alex Perkins, an epidemiologist at the University of Notre Dame in Indiana. Also in July, he and his colleagues published a model accounting for potential herd immunity in the ongoing Zika outbreaks, bringing the estimate of how many pregnant women are likely to contract the virus before the current epidemic ends down by several million. The team used serological data from previous Chikungunya outbreaks to make its predictions.

Better-quality antibody assays for Zika, said Perkins, will allow epidemiologists to test their predictions and prepare for the next outbreak.