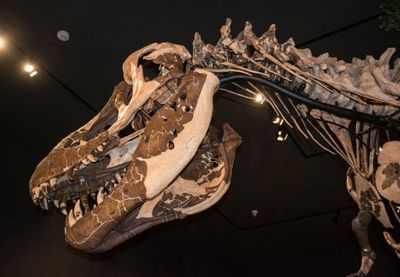 T. rex fossil at the Museum of the Rockies
FLICKR, Tim Evanson

The Montana Supreme Court has been asked to decide whether or not dinosaur fossils are minerals and, therefore, whether the owners of the mineral rights to a plot of land also own the dinosaur fossils found there, E&E News reported yesterday (July 10) via Science.

The case in question specifically concerns a T. rex skeleton, a pair of fossils unique in that they seem to have been killed and preserved mid-fight, and other fossils found on a particular plot of land, but its implications are much broader. A decision that dinosaurs are minerals could throw into question the ownership of who-knows-how-many dinosaur specimens, including those in museums.

In Montana, where many of the world’s dinosaur fossils have been found over the years, it’s common for different people—or corporations—to own a property’s surface and mineral rights. Historically,...

“If those started disappearing from collections, it would be a disaster,” David Polly, a biologist at Indiana University in Bloomington, Indiana and former president of the Society for Vertebrate Paleontology, which has been involved in the case, tells E&E News.

“What seemed apparent was that what had been depicted all along as a private party contractual and almost property dispute really had significant implications for the paleontological profession,” Gary Guzy, the former White House Council on Environmental Quality and Environmental Protection Agency general counsel, who is now with the firm Covington & Burling LLP in Washington, D.C., tells E&E News. Guzy has been working on the case on behalf of Society of Vertebrate Paleontology and several museums.

The case is closely tied to a land deal. In 2005, a pair of Montana ranchers, Mary Ann and Lige Murray, bought the surface rights to a plot of land, which they had previously rented, from brothers Jerry and Bo Severson. The following year the Murrays, along with an amateur fossil hunter, discovered the fossils of two dinosaurs that seemed to have been brawling when they died, and which they called the “Dueling Dinosaurs.” In 2013, a complete T. rex skeleton was found on the same property.

When the Seversons, who own the mineral rights to the Murrays’ land, found out about the fossils, one of which the Murrays were trying to sell to a museum for millions of dollars, the Seversons claimed ownership. The Murrays filed a lawsuit asking the court to state that they owned the fossils because they owned the surface rights to their land, and a district court sided with the Murrays. But when the Seversons appealed to the 9th US Circuit Court of Appeals, the appeals court sided with the mineral-rights owners.

At that point, the Society of Vertebrate Paleontology, the Field Museum of Natural History in Chicago, and the Museum of the Rockies got involved, asking the appeals court to rehear the case or send it to the state Supreme Court, where it is now.

This April, Montana enacted a law stating that fossils are not minerals and belong to the surface estate, but the law does not apply to existing disputes, including the one involving the dueling dinos.