For primates, males’ fancier ornaments are linked with smaller testes, according to a new comparative study.

ABOVE: Chimpanzees lack fancy ornamentation, but have large testes in relation to their body size.
© ISTOCK.COM, IMPALASTOCK

Birds are well known for extravagant, sexually selected features such as peacocks’ tails, but primates too go out of their way to show off their good looks to potential mates. Some species display flashy ornaments designed to signal their dominance or attract females. Take the large cheek flanges of orangutans or the oversized noses of proboscis monkeys. But the ornaments don’t always match what’s under the hood, so to speak.

A comparative study of more than 100 primate species finds that males tend to have either large testes or flashy ornaments, but not both—suggesting an evolutionary trade-off between the two. The situation is different for canine teeth, which some species use as weapons: in fact, the larger the testes, the longer the canines tend to be, scientists reported April 10 in...

“It’s great that this study has been done,” says Antje Engelhardt, a behavioral ecologist who studies primates at Liverpool John Moores University and wasn’t involved in the study. “We still know far too little about sexual ornaments, weapons, and also testes and sperm competition in primates.”

The authors—a group of Australian and Swiss researchers—turned to previous studies to gather data on sexually selected traits across a range of primate species, from bonobos to lemurs. These included figures on average testes size relative to body mass, as well as canine length and the expression of sexual ornaments in males relative to females. They also noted a number of social traits, such as the degree to which males monopolize access to females in a social group.

Using a statistical phylogenetic model, they uncovered several striking correlations in the data. Importantly, they found that larger testes tended to correlate with less pronounced sexual ornaments. “Bonobos or chimpanzees have huge testes relative to their body size, but they are otherwise quite modest-looking,” having no noticeable ornamentation at all, explains coauthor Stefan Lüpold, an evolutionary biologist at the University of Zürich. 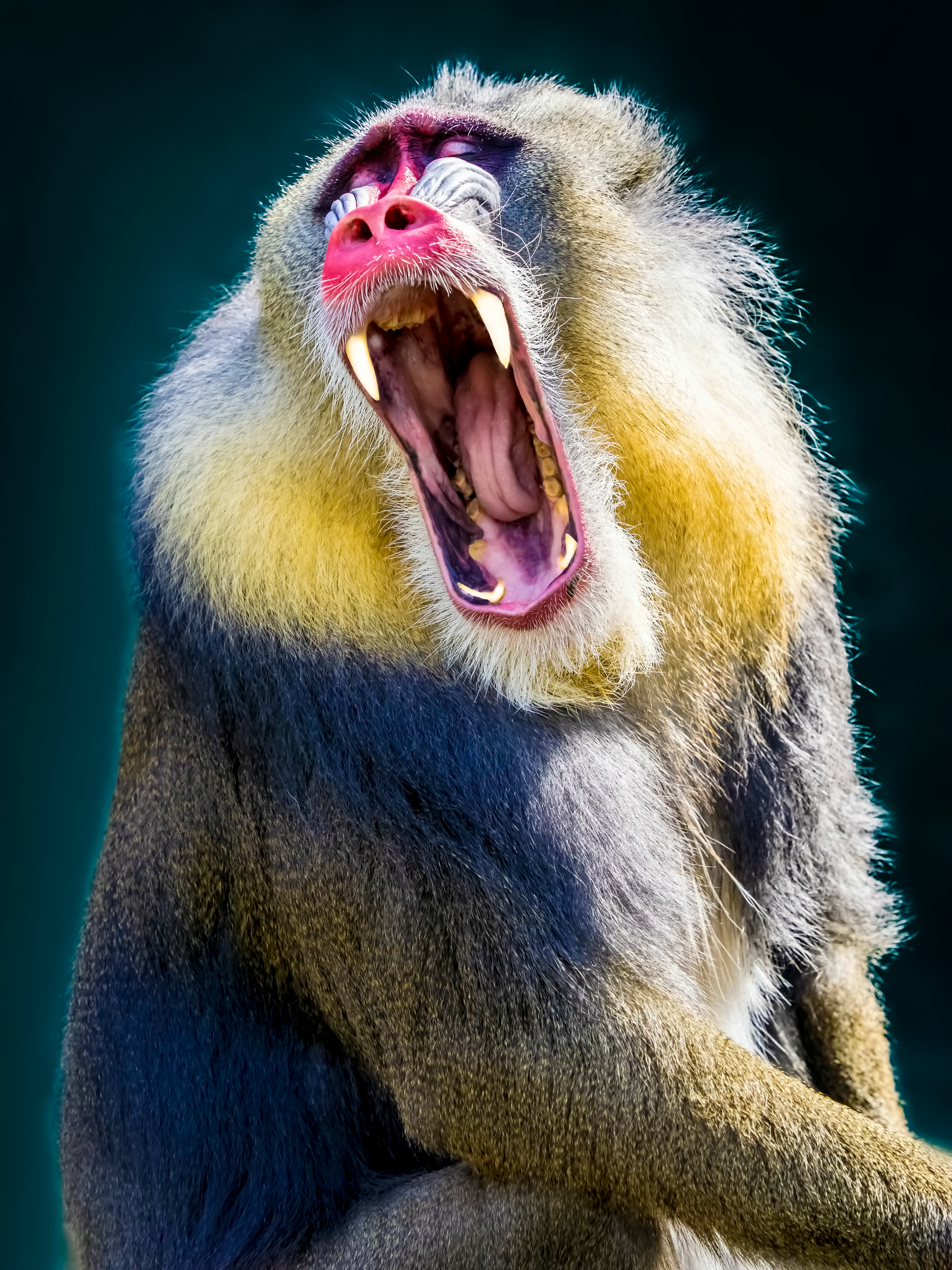 Although some have taken this finding to mean that men with beards may have smaller testes, and the analysis did include humans, Lüpold stresses that this isn’t the case: the study compares variation across species and doesn’t draw any conclusions about variation within individual species, he warns. Besides, “you can shave the beard, and your testes don’t change.”

The researchers suppose the correlation has to do with the animals’ social mating systems: Chimpanzees and bonobos, which for the most part lack ornamentation, are by nature promiscuous species, females typically mating with multiple males. This means that within the female reproductive system, there’s competition among sperm to fertilize the egg. To secure better chances of outcompeting the gametes of rival males, it pays off to produce more sperm, and growing larger testes is one way to do that, Lüpold explains.

Paradoxically, the team found the opposite pattern when they examined the relationship between gonad size and weapons: Testes tended to be larger in species where males have longer canines relative to females, such as in long-tailed macaques. Both sexes tend to mate with multiple partners, and while the alpha male has the greatest access to females, he doesn’t entirely monopolize access to all of them. “Consequently, they have enlarged weapons—through priority access to females—but also relatively large testes because of some level of sperm competition,” Lüpold says.

Why ornaments trade off against testes size is unclear. The team suggests that canines and testes may not compete for the same developmental resources, whereas ornaments and testes would. In addition, fleshy ornaments or colorful skin could be more costly to grow and maintain than teeth, which once established don’t require much additional resources.

Engelhardt expressed surprise about the positive relationship between canines and testes size. Having both long canines and large testes might make sense for some primates, such as long-tailed macaque males, “but I would not expect that this is then something that comes out as a general trend,” she remarks.

Less surprising to Engelhardt is another correlation that Lüpold and his colleagues uncovered: that canine length and ornamentation go hand in hand. When they examined the relationship between canine length and the expression of ornaments alone, they found them to be positively correlated. Male mandrills and gelada baboons, for instance, both have relatively long canines as well as striking ornamentation compared to females, but also have smaller-than-average testes compared to other primates. This makes sense, says Engelhardt, because by using ornamentation to signal one’s strength, “the higher-ranking males would signal to the lower ranking ones that it wouldn’t make sense to challenge them, which would save both energy and potential injuries,” she says. 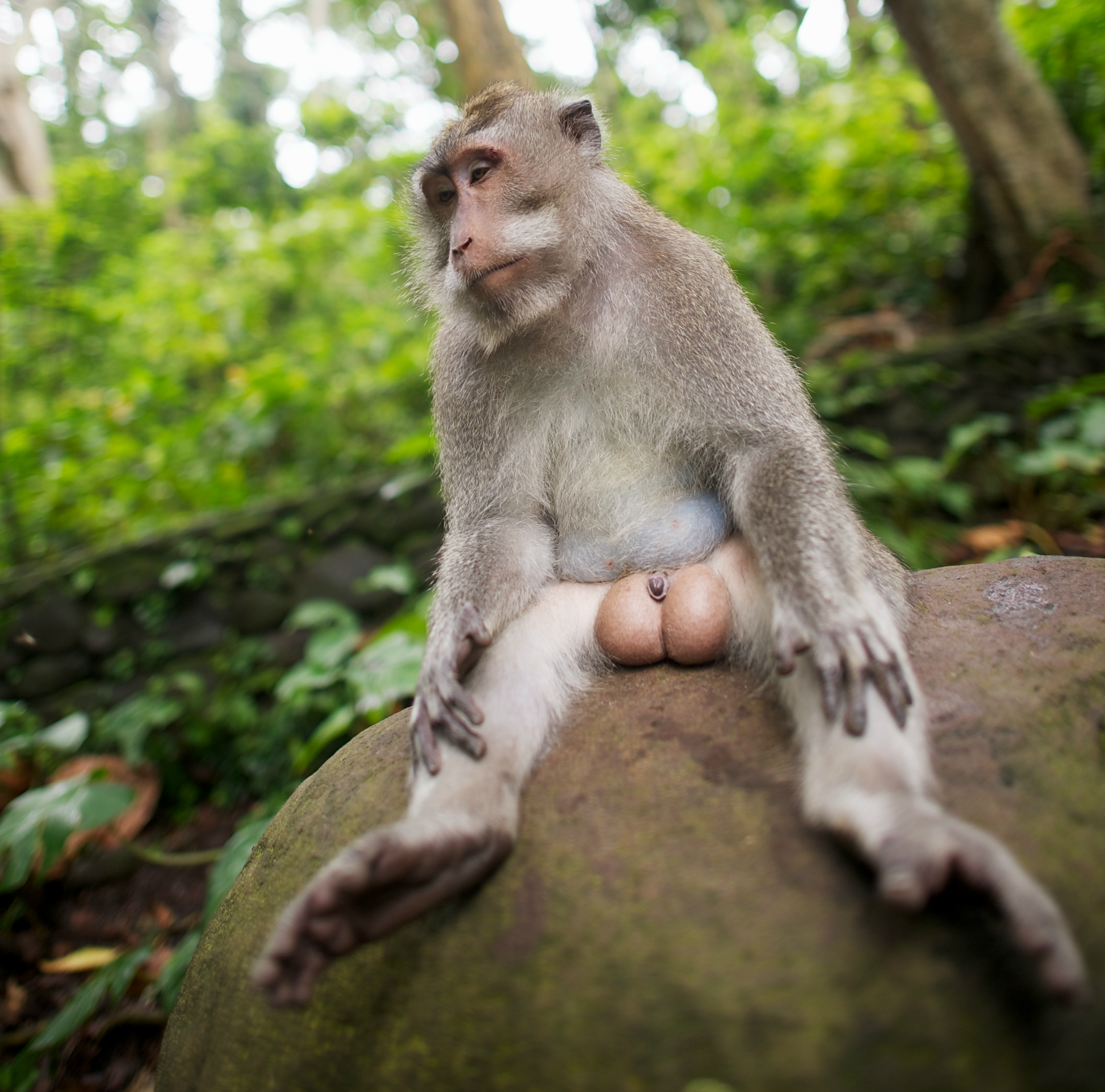 However, whether this interpretation holds water depends on the function of male ornaments, which isn’t well understood in primates. In some cases, ornaments could serve as signals of fighting ability or social status—so-called “badges of status”—but they could also signal attractiveness and viability to females, or both. The authors didn’t distinguish between these possibilities, Engelhardt cautions. “I would not necessarily mix those in one analysis, because the function is completely different,” she says.

Marion Petrie, an evolutionary biologist at Newcastle University, would like to see more within-species work exploring what information such ornaments convey to females. “Most of the literature on mating systems talks about the ability of males to monopolize females and the environmental factors that might lead to this. However, I am also interested in the female perspective,” she writes in an email to The Scientist. “Of course, one really needs to consider the costs and benefits to males and to females under both scenarios, but we seem to be a long way from understanding the drivers that result in one system predominating over the other.”

For her, the study illustrates the diversity of ways in which sexual selection operates across the animal kingdom. “We are only beginning to touch the surface of understanding it. There is so much we still don’t know about the evolution of the natural world and the sad thing is, we may never know as we are in real danger of losing it before we will ever find out.”