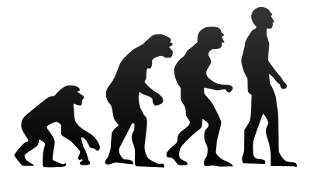 Bipedalism didn’t evolve as a way for ancient humans to keep cool during the heat of the day, according to a new model published today (December 12) in Proceedings of the National Academy of Sciences. But once hominins did start walking on two feet, it ignited another change that allowed them to stay cool—the loss of body hair. The new model explains why similarly sized mammals that walk on all fours and that may tend to overheat have not given up their coats.

“If you are already walking upright for other reasons it actually makes the advantage you get from losing hair bigger than if you were on four legs,” said David Wilkinson of John Moores University in Liverpool, who authored the study along with Graeme Ruxton of the University of Glasgow. “You are moving more of your body up above the ground and sweat...

Wilkinson and Ruxton came to this conclusion after analyzing a mathematical model of body temperatures during activity at different times of the day for quadrupeds and bipeds with and without fur. The model is an update to a previous theory by Peter Wheeler also of John Moores University, who proposed that both hair loss and bipedalism were driven by our need to cool down. His theory was that switching from four to two feet would reduce the amount of an animal’s body in direct sun and thus increase its ability to stay cool.

But Wheeler left out a critical factor, Wilkinson said—animal movement. Stationary animals could just hang out in the shade during the peak of the day to avoid overheating, he noted, while activities such as foraging likely forced early humans into direct sunlight more often.

Taking movement into account, Wilkinson and Ruxton’s model predicted that modern human ancestors would generate much more body heat metabolically as they traveled and hunted than the sun could cause, suggesting that standing upright to avoid the sun, as Wheeler’s model proposed, would have done little to fight overheating.

“In Peter’s models, he had a nice thermal advantage to standing upright,” said Wilkinson, “but now that vanishes in our version of the model.” The new model further showed that four-legged creatures do not shed body heat as quickly when they lose their fur, suggesting that the loss of body hair would only have been a significant advantage to ancient humans if they were already walking on two feet. Thus, Wilkinson and Ruxton argue that bipedalism arose first—for some reason other than heat loss, such as improved observation of dangers, appearing larger to predators, or freeing the hands for tool use and carrying—then hair loss began, as a way to combat overheating.

The addition of animal movement to the model was key, said Sarah Elton of the Hull York Medical School, UK, who was not involved in the study. “In any environment you move between parts that are shaded and parts that are in open sun…. sometimes you are sheltered from the wind or not.”

But while Elton is generally in praise of the model, she pointed out that, “at the end of the day, it is just a model and models stand and fall on the type of evidence and also on the sensitivity of the model itself,” or the degree to which it is affected by variations in the assumed parameters, such as the climate, early humans’ movements, availability of shade, and so on. “There are other ideas” about why humans may have dropped their body fur, such as selective pressures imposed by the opposite sex, like a preference for hair-free mates.

Markus Rantala of the University of Turku, Finland, who was not convinced by Ruxton and Wilkinson’s model, offered another theory. “My personal opinion is that only selection caused by ectoparasites is able to explain the origin of human nakedness in a satisfactory way,” he said in an email. As humans began to live in fixed home bases and in close quarters, many parasites such as lice and fleas would have flourished. “As the ectoparasite burden on hominids increased, having fewer parasites may have become more important for survival than a warm fur coat,” Rantala said. Less body hair makes ectoparasites easier to spot and pick off.

Rantala also asks why, if the Ruxton-Wilkinson model is correct, did our ancestors not regain hair when they migrated to northern latitudes with cooler climates, about two million years ago. “Our skin color changed but we did not regain the hair,” he said. “There must have been other selective benefits to being naked than just thermoregulatory reasons.”

But by that time, humans may have gained other ways to keep warm, Wilkinson argued. “One possibility is that by the time humans were migrating they probably had fire and possibly clothing.” Although Wilkinson believes in the new model, he’s not surprised that there is some disagreement in the field. “Human evolution is an argumentative area of science,” he said. “ It always has been.”