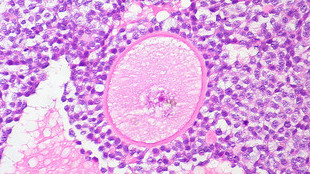 A human oocyte.FLICKR, ED UTHMANA woman’s eggs decline in quality and quantity as she ages, at least in part because an important DNA repair pathway becomes impaired, according to a paper published today (February 13) in Science Translational Medicine.

The pathway, which includes proteins encoded by the well-known BRCA genes, is supposed to repair double-strand breaks in DNA. But as women get older, the study found, repair mechanisms lose efficiency and reproductive cells accumulate damaged genes and often commit suicide.

“I think we have found a general theory of reproductive aging,” said coauthor Kutluk Oktay, a fertility specialist at New York Medical College and the Institute for Reproductive Medicine and Fertility Preservation.

“They are tying together something that has been perplexing and vexing, which is what happens to women’s eggs as they age,” said David Keefe, a New York University Langone Medical Center fertility doctor...

While women are born with 1 million oocytes, only about 500 turn into full-fledged eggs over their lifetime. By the time women reach their early 50s, the remaining oocytes have almost completely degraded. Why the oocytes degrade so rapidly in comparison to other body tissues was a mystery.

Oktay’s team first tested mouse and human oocytes for double-strand breaks and found that the damage increased significantly with age. They also looked at expression of several repair proteins in the cells. Expression of BRCA1 and a handful of other repair genes decreased with age. The results implied that dysfunction in DNA repair may lead to genomic damage seen in aging oocytes.

Indeed, when the researchers down-regulated repair genes using RNA interference and exposed oocytes to hydrogen peroxide, they saw higher rates of double-strand breaks. And when they over-expressed BRCA1 in old mouse oocytes, the cells were more likely to survive hydrogen peroxide exposure—about as well as the oocytes of young mice.

Finally, the researchers studied both mice and women with mutations in the BRCA1 and BRCA2 genes. People with mutations in BRCA1 had lower oocyte reserves in their ovaries than those without the mutations, and mice with BRCA1 mutations had smaller litters of pups than wild type mice. Humans and mice with BRCA2 mutations appeared reproductively normal, though Oktay suspects that the BRCA2 mutation may have more minor effects on oocyte decline that become apparent later in life.

“The key thing is we have a unifying mechanism to understand why age-related infertility occurs in women,” said Oktay, who had begun his research on reproductive aging and DNA damage after he noticed in his clinical work that women with the BRCA mutations seemed to produce fewer eggs than average when undergoing fertility treatments.

“I think scientifically the paper is very good,” said Steven Narod, Canada Research Chair in Breast Cancer and a professor at the Dalla Lana School of Public Health at the University of Toronto who was not involved in the study. “It makes a pretty good argument that the oocytes of the [mutation] carriers decline with age more rapidly than [those of] the non-carriers.”

And though the paper never connected the reduced egg yield in women with the mutation to actual problems getting pregnant, he noted, the findings could have “interesting implications for the world of fertility.”

Oktay, for example, hopes to eventually find pharmaceutical methods of reversing the decline in repair proteins to prolong fertility, but to do that, scientists will first need to uncover the cellular processes that lead to reproductive aging. “We need to find out why with age the repair efficiency goes down,” he said. “Then we can manipulate the whole thing.”