Strong winds and heavy rain can sometimes wash the animals out to sea, but shortages of fresh drinking water and food are more worrisome as sea levels rise.

A stallion with a chestnut coat and blonde mane pins his ears back and lowers his head. Almost instantly, another stallion nearby falls in line.

“Did you see that little interaction?” Sue Stuska, a biologist with the National Park Service, asks an onlooking tour group. “Those behaviors help establish dominance.”

We walk on, wading through marshy water and lifting our cameras to snap photos of the wild horses. A slight wind blows, and the air smells and tastes salty. There are no lush, green pastures here on Shackleford Banks, North Carolina, a thin strip of dunes and marshes at the southern end of the Outer Banks. Yet a few hundred feet away, three stallions and two mares nibble...

Stuska explains that displays of dominance help the lead stallion keep his harem together. He often uses subtle behaviors—pinned ears and a lowered head or a foot stamp—to direct where the others move and when and where to eat and drink. This behavior, while seemingly trivial to the untrained eye, could be particularly important in hurricanes—possibly making the difference between getting to higher ground or being washed out to sea.

Stuska makes regular trips to the island to help manage the herd by recording the horses she sees, their mating habits, and which mares may need to be given birth control in the coming years to maintain the herd’s size.

“We don’t have formal data on what the horses do in a storm, but we do know that the Shackleford herd has done really well in the storms we have had,” she tells The Scientist in a phone interview. That’s reassuring, as hurricane season already in the Atlantic has started, and NOAA, the National Oceanic and Atmospheric Administration, predicts 9 to 11 named storms and 4 to 7 hurricanes this year.

More problematic, perhaps, is how the horses will fare as sea levels rise in response to climate change.

The last storm-related deaths of Shackleford horses were in 1999. Four stallions were swept off the island and out to sea. “That was before my time, but if I had to guess, the more dominant stallions of the other groups pushed the bachelors out away from higher ground,” Stuska says.

Dan Rubenstein, a Princeton University zoologist and ecologist who has studied the horses at Shackelford, writes in an email to The Scientist that the “horses deal with hurricanes mostly as they do other storms—they put their butts into the wind and ride it out or head into the maritime forest for protection.”

Hurricanes come up relatively suddenly, says John Taggart, a professor emeritus of environmental studies at the University of North Carolina, Wilmington. He studied the horses on the Rachel Carson Reserve, just north of Shackleford, through the 1990s and 2000s, and says that their survival in such storms is a “chancy thing,” especially on the reserve, which has only a little more than a square kilometer of higher ground for its horses to find shelter.

Still, they manage. In the 1990s, Taggart watched as the horses huddled together in thickets during a nor’easter. Typically, the herd is divided into harems, but the divisions had broken down. The horses “gave up their internal, political dynamics, staying together on the relatively highest ground of that site,” Taggart says. 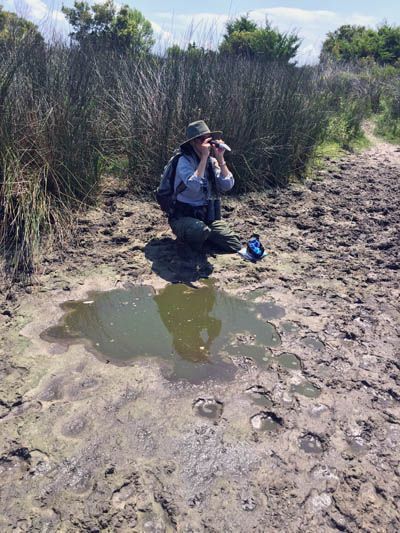 Sue Stuska of the National Park Service measures the salinity of the water at
one of the spots on Shackleford Banks that the horses frequent for fresh water.
ASHLEY YEAGER

Sometimes in the move to higher ground, the horses have to cross lower land and can get washed away. On Assateague Island National Seashore off Maryland, the last recorded drowning was during a storm in 1992, when 13 horses from the same group washed ashore dead. Surprisingly, notes Allison Turner, a biological technician at park, the band that normally grazed in the lowest point of the island survived on higher ground. “We don’t know how intentional the move was but [that stallion] and his group were definitely out of the danger zone,” she says.

Horses, even domestic ones, have “good barometric sensors,” Stuska notes. “They are more attuned to weather and storms than we are, and they don’t mind being wet.”

The horses can outlast even the fiercest of storms, but they can’t control what happens to their drinking water, which pools atop bedrock or saltwater in three main spots on Shackleford. If the island is washed over in a storm, the watering holes can become too salty to drink. “If the salt content doesn’t clear, the horses never drink from the watering hole again,” Stuska says.

During the tour, Stuska tests the salinity of a tiny puddle where the stallions and mares had gone to drink. Even mucked with algae with a faint smell of sewage, the water was fresh. Judging by the hoof prints, the horses probably did not drink from the little pool, but dug with their hoofs into the sand to unearth fresher water, she says. “They need a lot of fresh water because there’s salt on the grasses they eat.”

Rising sea levels as a result of climate change and warmer temperatures could limit the horses’ supplies of fresh water and food. Some climate models even predict the barrier islands could be partially or completely under water by 2100.

For that reason, Taggart says that the horses should be moved off the barrier islands permanently, particularly those on Rachel Carson Reserve. In a 2008 paper published in Natural Areas Journal, he argued that the horses living on the reserve are at highest risk because drinking water is in limited supply. There are no permanent pools of fresh water, and the water resources are especially scarce during the hot summer months when there is little rainfall and, coincidentally, when mares are lactating.

Moving the horses to the mainland would be humane, Taggart says. And they are not the only ones that would be protected by relocation. Research has shown that horses grazing on the barrier islands’ grasses, particularly those at Assateague, affect the formation of the dunes and contribute to their erosion. Stuska is currently working on a project with other scientists to assess how the horses on Shackleford Banks will fare in the face of climate change.

The horses are an iconic tourist attraction on the barrier islands of the mid-Atlantic, and relocating them certainly has its detractors, with public opinion and politics preventing proposals to relocate the horses from progressing, Taggart says. “But we have to consider what’s in the best interest of the horses,” he says. “We have to ask ourselves, ‘Are we more interested in us seeing the horses or in the horses themselves?’”