ABOVE: Since 1901, there have been 599 Nobel Prizes awarded for scientific research: 18 have gone to women, and of those, 12 have been in physiology or medicine.
© ISTOCK.COM, RRODRICKBEILER

Even when it comes to prize money in science, women take home less cash and less respect than men, according to an analysis published as a Nature Commentary on Wednesday (January 16).

Not many studies have looked at the influence of winning a major prize or two on a scientist’s career, but evidence does suggest that receiving such awards can “catch the eye” of granting agencies and influence the direction of a researcher’s work, according to the commentary. To see if there were any gender disparities in the effects of prize winning, Brian Uzzi and Teresa Woodruff of Northwestern University and their colleagues reviewed award winners in biomedicine from 1968 to 2017. Using Wikipedia and Wikidata to collect information, the team developed a list of 628 prizes won by 4,186 men and 871 women.

More women have started winning such prizes in recent years, with women awardees up from 5 percent between 1968 and 1977 to 27 percent in the last 10 years. The analysis also shows that when considering all of the awards, women earn 64 cents of prize money for every dollar a man receives, and when cutting out the top and bottom prizes, women winners earn 60 cents of every prize dollar a man receives, the researchers report. Women also tend to disproportionately win awards for service compared with those for research, and they do not win as many prestigious prizes as men. An analysis of the most prestigious prizes shows women received only 11.3 percent of them over the 50 years reviewed; they received 5.1 percent of them between 1968 and 1977 and 17.4 percent of them between 2008 and 2017.

“Taking all the data together, these patterns suggest that female biomedical scientists are now winning prizes at approximately five times the rate of five decades ago. Yet when compared with their male counterparts, female scientists win awards that receive less money, get less public attention and are less likely to promote career advancement,” the team writes. “Tracking of prizes could help to raise awareness and to correct gender imbalances in recognition, providing another baseline against which to check progress.” 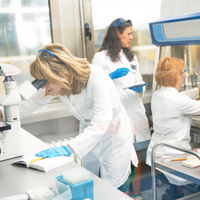