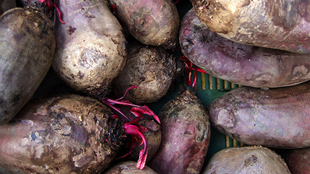 WIKIMEDIA, ZYANCEPlants defend themselves against infectious bacteria and fungi by releasing a storm of reactive oxygen species (ROS), which kill the invaders. But for the sugarbeet nematode (Heterodera schachtii), this defensive attack is actually the key to its success.

Shahid Siddique and Christiane Matera from the University of Bonn in Germany have found that the nematode switches on plant genes that produce ROS. Without these molecules, the parasite cannot properly grow within its host. Their results are published today (April 3) in Science Signaling.

H.schachtii targets sugar beets, cabbages, broccoli, and related plants. It enters their roots as a larva and burrows its way toward the plant’s vascular cylinder, which runs down the middle of each root. The larval nematode then gently stabs the host’s cells with its mouthparts, causing them to partially dissolve and fuse with one another. The result is a giant nurse cell...

This sequence of events plays out differently in mutant Arabidopsis plants with faulty copies of the RbohD and RbohF genes, which protect against infections by producing ROS. These mutants are generally more susceptible to fungal or bacterial infections. But to Siddique and Matera’s surprise, these plants are more resistant to H.schachtii. While the nematodes can still invade, they make slower progress toward the vascular cylinders and create smaller nurse cells. Their eventual numbers are lower and their adult bodies smaller.

The researchers suggested that when the nematode first invades and wounds a root, it triggers an immune response that kills off local cells. The ROS contribute to this process, but also restrict it to the zone of infection. “They are executing cells, but also controlling the degree of cell death so it doesn’t get out of hand,” said Siddique.

In the mutant plants, which do not produce ROS, the wave of dying cells spreads faster than the nematode. This prevents the worms from successfully setting up the nurse cells that they need to feed from.

Jeff Dangl from the University of North Carolina at Chapel Hill, who studies plant-pathogen interactions but was not involved in the work, praised the study. In an e-mail to The Scientist, he said that it supports the idea that two responses to infections—an ROS burst and a wave of programmed cell death—can be antagonistic, rather than the former driving the latter.

It is unclear whether the nematodes actively release substances that stimulate the produce of ROS, or if they are simply relying on the plant’s natural response. The team next wants to understand how the nematode’s presence triggers cell death, and how the ROS suppress this.

“This work gives us new clues as to how we might inhibit the ROS-producing machinery in the root to inhibit nematode infection, which is a huge agricultural problem in many crops,” said Dangl.