Long-term administration of the antidepressant fluoxetine was tied to decreased concentrations of about 100 different brain lipids in adolescent macaques, hinting at a potential mechanism underlying the drug’s rare but severe side effects.

Young macaques given the popular antidepressant fluoxetine for two years had lower levels of certain fatty acids and other lipids in their brains than ones not given the drug, finds a recent study (July 28) in International Journal of Molecular Sciences. The findings may help explain why younger people sometimes experience adverse side effects when taking the drug.

Fluoxetine, often sold under the brand name Prozac, is a prescription medication that can be given to adults as well as children as young as 7 or 8 years old.  But there’s not good literature on the long-term impact of fluoxetine and other psychoactive drugs that we use to treat adult symptoms in the young brain, says Bita Moghaddam, a behavioral neuroscientist at Oregon Health & Science University who was not involved in the study, “so [it] was really nice to see that there is this level of focus.”

While genes and neurotransmitters may get the lion’s share of the attention in neuroscience research, brains are mostly made of up fats and other lipids. But lipids, it turns out, can be hard to study. So, when University of California Davis brain scientist Mari Golub and her colleagues wanted to know what was going on with the fats in the brains of the monkeys they were studying, they reached out to the brain lab at the Skoltech Institute of Science and Technology in Moscow where Anna Tkachev—the lead author on the new paper—works. “We happen to specialize in lipids in particular,” says Tkachev.

For years, Golub and her colleagues had been using macaques to investigate the effects of fluoxetine. The antidepressant can be an effective treatment for maladies such as depression and obsessive-compulsive disorder. However, some studies suggest that the drug can occasionally cause serious, long-term side effects, and perhaps counter-intuitively for an antidepressant, it’s been linked to an increased risk of suicidal thinking and behavior, particularly in young people.

The team sought to gain insight into why that might be. To study the effects of this drug on youngsters in particular, the researchers set up an experiment where they took a group of one-year-old macaques—approximately equivalent in development to a 4 to 6-year-old human—and gave roughly half of them fluoxetine for 2 years (ending about a year before the animals reached puberty). The other half received a placebo. Along the way, they looked at the drug’s effect on the monkey’s levels of impulsivity, sleep, and social interaction, as well as measured the levels of potential biomarkers of treatment response in their blood.

As a further step, the team was interested in getting a more holistic, long-term view of what was going on in the monkeys’ brains—including looking at lipids, since previous work with rodents and reports from human patients had hinted that there may be changes to those biomolecules—but they lacked the capacity to do this themselves. So, they reached out to the lab of researcher Philipp Khaitovich in Moscow, who put Tkachev and her team on the problem.

Tkachev’s group took post-mortem brain tissue from the monkeys, who had been taken off of fluoxetine for a year following their 2-year regimen, and looked for a variety of possible differences between the treatment and control groups. This included looking for divergences in polar metabolites (such as amino acids or sugars) or gene expression levels, as well as any differences in the tissues’ lipids.

They found that while gene expression differed only slightly between the two groups, and levels of the polar metabolites showed no significant differences, the concentrations of about 100 lipids in the treated macaques’ brains diverged significantly from the fluoxetine-free group. In particular, there were reductions in polyunsatured fatty acids (PUFAs) and other lipids that contain them in the treated monkeys. PUFAs are a class of lipids with long carbon chains containing more than one double bond that includes things like omega-3 fatty acids.  To the researchers, this suggested there were major, long-lasting shifts in fatty acid metabolism with prolonged fluoxetine administration. 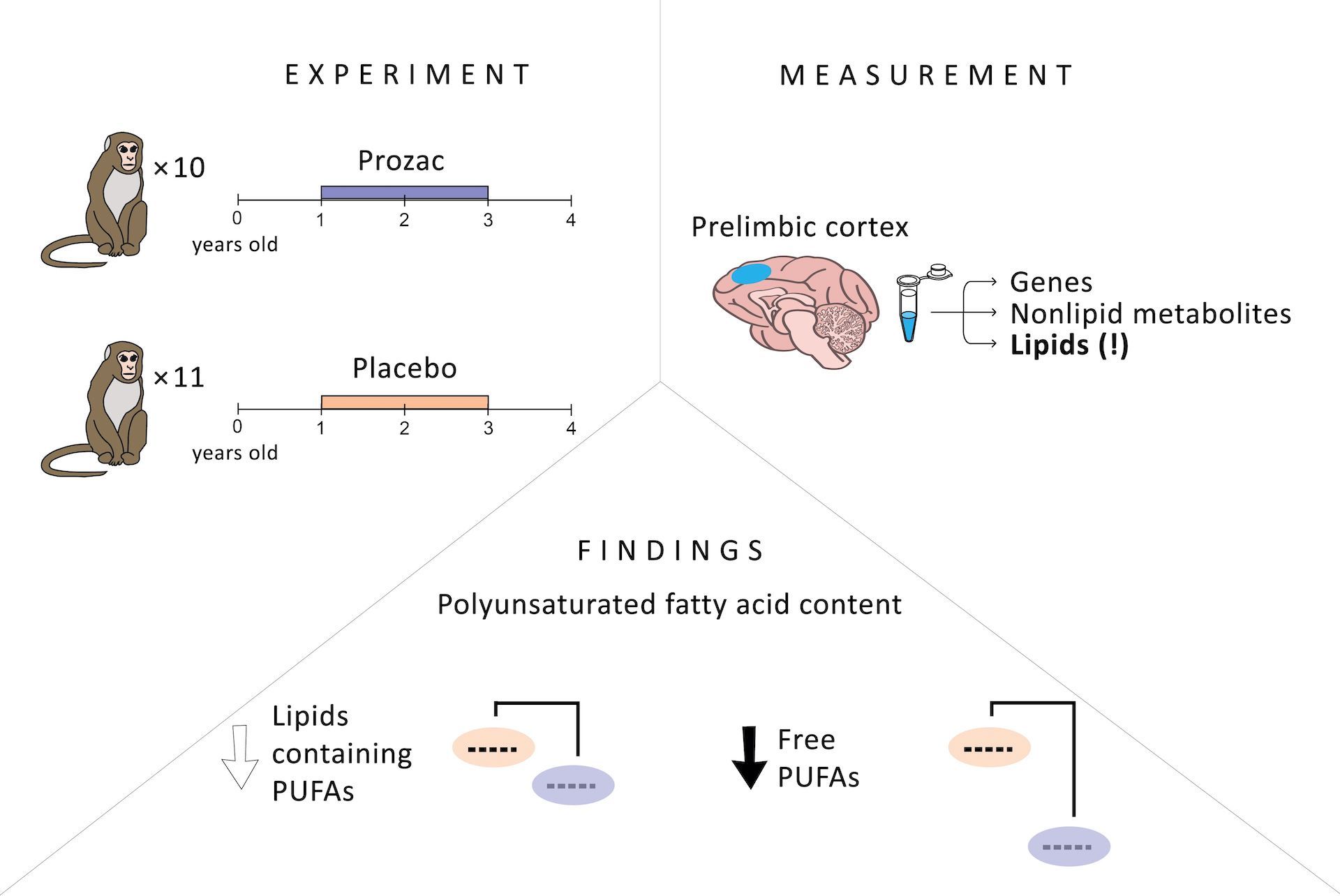 An overview of the experiment and findings from Tkachev et al., including the differences in lipid abundances between the two groups of monkeys
Reworked by Nicolas Posunko/Skoltech from Int J Mol Sci 22:8089, 2021

Lipids help build cell membranes and are necessary for proper brain function. Deficiencies and abnormalities in PUFAs in particular have been linked to diseases like schizophrenia, depression, and Alzheimer’s. And they may be especially important to younger brains, notes Moghaddam: “We need to keep in mind that the [human] brain is still developing until your mid-to-late-twenties,” she says. Much of that development has to do with myelination—the development of fatty sheathes around neurons that help electrical signals travel from one cell to another. If fatty acid levels are disrupted in an adolescent’s brain, “that could have long-term sustained effects on how [their] brain is wired,” she says.

Beth Levant, a neuropharmacologist with the University of Kansas Medical Center who studies the role PUFAs play in the nervous system, highlighted the scope of the work as a stand-out feature of the paper authored by Tkachev and her colleagues. “This study is really interesting because it is really looking at a full metabolomic profile,” says Levant, something that was not possible until relatively recently.

That said, there are lingering questions, says Levant, such as whether adult animals would display similarly low lipid levels were they on the same drug regimen as youngsters.

Also, as with any non-human animal, macaque bodies aren’t guaranteed to work the same way human bodies do. In particular, Tkachev notes that differences in diet may by a potential confounding factor. Macaques are herbivores and must synthesize much or all the PUFAs they need themselves. Humans, on the other hand, are omnivores and can get the molecules directly from foods such as fish. “So it’s not clear if the lipid metabolism would work the same way in humans,” she says.

The mechanisms underlying how fluoxetine causes lipid levels to fall and how lower lipid levels might lead to side effects also need unravelling.

It’s likely too early to make any major conclusions, especially with regard to humans, says Tkachev. Still, this work gives scientists a glimpse at the potential role of these lipids, which have been historically overlooked, in mental health conditions, and suggests that they may be key factors in the adverse effects, thus warranting further study.

“As my supervisor would end his talks,” says Tkachev: “Lipids are cool.”