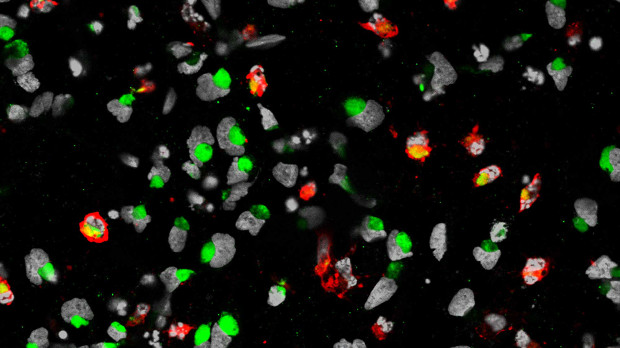 Zika virus (green) infects human neural progenitors and leads to cell death (red).SARAH C. OGDENLaboratory-grown human neural progenitor cells, which can give rise to the kind of neurons and glia found in the brain, can be infected and killed by a strain of Zika virus, according to a report published today (March 4) in Cell Stem Cell. The study, albeit preliminary, offers the first suggestion of how Zika infection of pregnant women might lead to microcephaly in their babies.

“The study demonstrates that human neuron-like cells can be infected with Zika virus and that infection leads to death and reduced growth of the infected cells,” said microbiologist and immunologist Andrew Pekosz of Johns Hopkins University who was not involved in the study. “This is important because this may be a way to study the damage induced directly by infection.”

The number of infants born with microcephaly—a neurological...

On hearing about the Zika-microcephaly crisis in Brazil, Ming realized she had a unique opportunity to examine whether human neural progenitor cells might be susceptible to infection. Partnering with scientists at Florida State University who study Zika virus, Ming’s team inoculated the neural progenitors as well as human iPSCs, embryonic stem cells and immature neurons and compared the extent of the resulting infections. While less than 20 percent of the iPSCs, embryonic stem cells and neurons became infected, the infection of the neural progenitors was “really striking,” said Ming. Up to 90 percent of the cells contained the virus and “what is a bit scary to us,” she said, “is that we found these progenitor cells can actually spit out more virus”—with the potential to infect yet more progenitor cells.

Ming and colleagues showed that infection of the progenitors either killed the cells or slowed their proliferation significantly.

Neural progenitors “give rise to the larger population of neurons and glial cells of the brain,” Ming said. “So if they are infected and they die or have retarded growth we think that could have an impact on the neurons they will produce.” As yet, however, the team has no evidence for how such infection might affect brain development.

“These laboratory findings may begin to unearth some possible mechanisms by which Zika virus infects and damages brain tissue,” said virologist Ian Mackay of the University of Queensland in Brisbane, Australia, who did not participate in the research. “But they are one step on a long path to understanding the mechanism in humans and should be considered with care and in context.”

For one thing, he said, the virus strain used in the study differs to the one responsible for the ongoing outbreak in Latin America. “It is unclear whether this lab virus still behaves in the same way as do Zika viruses currently circulating in Brazilian mosquitoes and infected humans,” he said. Mackay added that the iPSC-derived neural cells grown in culture “may not yield infection results that accurately reflect disease processes in humans.”

To gain a better understanding of potential disease mechanism, Ming’s team plans to examine whether the infected neural progenitor cells lead to abnormal development of brain organoids—cultured mini brains derived from human iPSCs. “But still this won’t tell you directly if that’s what’s happening during pregnancies,” she said, “Ultimately, that evidence has to come from the clinic.”

Indeed, agreed Mackay, “much work remains to be done to understand whether Zika virus is capable of causing the diseases or diagnoses with which it is being presumptively associated.”