If a visitor to Earth were to try to assess life's diversity by touring terrestrial biology laboratories, he, she, or it might conclude that the planet is overrun with fruit flies, mice, small plants, tiny transparent worms, and a few types of single-celled inhabitants. That skewed view might be why it's taken more than a century for the field called evo-devo today to have taken off.

It's also why Indiana University distinguished professor Rudolf (Rudy) Raff collects sea urchins from the Australian coast instead of ordering mice from the Jackson Laboratory or flies from the Drosophila stock center right next door. He's been doing so since 1985, along with wife and researcher-in-her-own-right Beth, who takes an annual "maggot sabbatical" to join him.

In February, Rudy Raff was one of eight scientists to receive the Medal of Alexander Kowalevsky from the Council of the St. Petersburg Society of Naturalists in Russia. Due to intervening wars, revolutions, and national dissolutions, the medal had not been awarded again since its creation in 1910. Scott Gilbert, professor of biology at Swarthmore College and another founder of evo-devo, explains why Raff received the honor: "Rudy is trying to create a new synthesis of the entire field of biology, nothing less, by reuniting evolutionary biology with developmental biology."

Before evo-devo had a name, Raff organized symposia that brought together the contributing life sciences in a new way. "At one of these meetings, I heard an animated conversation between a postdoc in developmental biology and an eminent arthropod paleontologist. Both were investigating the origins of the insect jaw," Gilbert recalls. Raff was the first chair of evo-devo for the Society for Integrative and Comparative Biology, and he established the first journal. "Rudy has gotten the researchers in evolutionary and developmental biology to speak to each other, he's given us a manual as to how to productively have these conversations, he has framed the problems for the field, and he has provided a specific forum for discussions in this area," Gilbert adds.

Back in the lab, Raff concentrates on echinoderms, the invertebrates with a characteristic five-part symmetry. He sees two ways to choose one's experimental organism. "You can start with a model and study its relatives. Or, you can go out and find species with appealing properties. I find organisms such as sea urchins and starfish that are interesting and don't worry if they are suitable models."

By generalizing from "little collections of organisms," biologists have missed many clues to evolution, Raff contends. A broader view of life also entails considering development right from the beginning. "Nature has alternate developmental modes. All sea urchins, all frogs, don't necessarily develop in the canonical way. This is wonderful material to reveal evolution," he exclaims. "How does nature make essentially the same organism through a completely different developmental pathway? How fast did the new way arise? How many genes did it require, and what were the selective pressures?" It all comes back to body plans, he says, and biologists needn't rely on Cambrian fossils for answers. "We can look at related modern organisms that had big changes in structure over time. With this approach, I've got my time machine."

Two species of sea urchins that last shared an ancestor 10 million years ago have provided that time machine for Raff. One species develops through a typical feeding larva stage; the other hatches directly into a juvenile adult. Yet when Raff's group created a hybrid, the animal was more than the sum of its parts—it had the larval feeding apparatus, yet also characteristics of more ancient echinoderms not seen in either parent.1 Raff speculates on what might have happened: "I think the first evolutionary step was freedom from the need to feed. From there, the animal could drop the feeding features, then develop others, like highly rapid development."

Raff came to science as many biologists do, collecting fossils as a young child. Another powerful influence was Gavin de Beer's book Embryos and Ancestors,2 which Raff read in his "spare time" as a grad student in biochemistry at Duke University, which meant while doing laundry. De Beer wrote that evolution occurs through changes in timing of key developmental events. That paradigm seemed too constraining to Raff, but back then tools such as molecular phylogenetics did not exist to experimentally investigate alternatives.

Ironically, timing would become a recurring theme in Raff's career. The guiding principles of what would become evo-devo began to coalesce in his mind long before he could categorize his thoughts. By the mid-1970s, his ideas had gelled sufficiently that he and distinguished professor Thomas Kaufman, who investigates homeotic mutations in Drosophila and other arthropods, offered a graduate course called "Embryos and Ancestors," one of the first official retrospective evo-devo courses. In 1983, the pair published an early book in the field,3 but it proved too visionary. By 1996, when Raff published The Shape of Life, the time had come.4 One of many rave reviews called it "arguably one of the most important books of the decade in evolutionary biology."5

Clearly uncomfortable being called a founder of a field that many have built, Raff—in the introduction to The Shape of Life—traces evo-devo's origins to Charles Darwin, German evolutionary biologist Ernst Haeckel, and many others.

Ricki Lewis (rickilewis@nasw.org) is a contributing editor.
She took the course "Embryos and Ancestors" with Rudy Raff and Tom Kaufman in 1977. 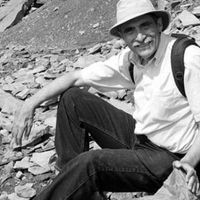