With true success stories in cancer treatment so rare, the flood of recent papers validating the 1998 Food and Drug Administration approval of Herceptin (trastuzumab) stands out.1-3 In a broader sense, the drug's rocky road from conception to clinic also validates the concept of rational drug design, an approach that will become more common as pharmaceutical companies mine human genome information.

"It is extremely gratifying to have gone though the first laboratory determinations, to clinical trials, and to see Herceptin impact on increasing survival. That is a hard endpoint to obtain, and it feels good!" says Dennis Slamon, the cell biologist and oncologist at the University of California, Los Angeles, School of Medicine who spent a decade shepherding the drug through the pipeline, a goal that many thought would never be reached. Genentech Inc. of South San Francisco, Calif., markets the drug. The cosmetics company Revlon established the Revlon/UCLA Women's Cancer Research program, which infused $13 million between 1989 and 1997 to the drug's development.

Herceptin is a humanized monoclonal antibody (MAb) targeted against Her-2/neu, a cell surface receptor protein that is abnormally abundant in 25 to 30 percent of breast cancers. MAbs were the darlings of the dawning of modern biotech in the 1980s and were promoted heavily as the long-sought magic bullets to treat cancer well before studies showed that they are only effective against certain subtypes of disease. But with herceptin, an eclectic research team hit pay dirt--the drug can not only extend life, but has led to some startling recoveries. "We now have a new weapon in our fight against breast cancer. For certain women with advanced disease, this product can mean new hope," said Health and Human Services Secretary Donna Shalala when the Food and Drug Administration approved the drug on Sept. 25, 1998.

Anatomy of a Cell Surface Receptor

WNBC science correspondent Robert Bazell chronicles the dubious beginnings of Herceptin in his 1998 book, Her-2.4 Postdoctoral researcher Lakshmi Charon Padhy, working in the laboratory of Robert Weinberg at the Massachusetts Institute of Technology, discovered the gene in 1979 in neurological tumors of mutagenized rats. But since the project dealt with the oncogene ras, "neu" was ignored. In 1983, Axel Ullrich of Genentech was part of a team investigating epidermal growth factor receptors that were known to function as oncogenes in chickens. The work turned up a gene-encoding, human epidermal growth factor receptor-2, or Her-2 for short (to add to the confusion, it is also known as erb-b, in deference to the chicken version.) Her-2's encoded protein matched that of the Weinberg's team's neu gene, and so it became known as Her-2/neu.5


A fortuitous conversation at an airport in 1986 opened the next chapter in Herceptin's story. Ullrich and Slamon, returning from a meeting in Denver, got to talking about their work while awaiting their flights. A few months later, when Ullrich gave a lecture at UCLA, the conversation continued, leading to a collaboration in which Ullrich's collection of oncogenes was screened against Slamon's collection of breast tumor specimens. And so began a series of experiments that solidified the link between the oncogene and certain breast cancers: normal cells in culture, given extra Her-2/neu genes, became cancerous; cancer cells with Her-2/neu genes, shut off with a monoclonal antibody, turned normal; and human breast tumors, implanted into nude mice, stopped dividing when the mice were given the antibody.

At the molecular level, Her-2/neu's role in causing cancer was becoming clear. The protein is a tyrosine kinase that traverses the cell membrane, extending outside the cell and dipping into the cytoplasm. When tyrosines in the extracellular domain are phosphorylated, a signal is sent into the cell, activating genes that trigger cell division. It is a matter of numbers. If a cell has too many Her-2/neu receptors, it receives too many signals to divide and a tumor is born. At the human level, Her-2/neu-positive breast cancer strikes with a vengeance, roaring through the body. It either resists treatment, or rebounds soon after it appears to have worked.6

Cells of women who test "Her-2/neu positive" have 1-2 million receptors, compared to the more normal 20,000-100,000. But the extra receptors can come from either revved-up transcription, or from actually having extra copies of the Her-2/neu gene--a clinically critical distinction, says Tim Cooke, professor of surgery at Royal Infirmary in Glasgow. "In Dennis Slamon's original work, the Her-2 antibody only blocked cell growth in cells with gene amplification," he says. Cooke's group has developed a test that uses fluorescence in situ hybridization (FISH) to detect gene amplification.7 "Using FISH technology, it is becoming abundantly clear that it is only the amplified tumors that respond to Herceptin," he adds.

Despite rapid advances in knowledge of the Her-2/neu system, the powers-that-be at Genentech remained less than enthused about developing a drug based on a MAb. This enthusiasm came in 1989, when the mother of a company vice president was dying of breast cancer. Meanwhile, studies in rats, dogs, and monkeys had demonstrated safety, and efforts began to "humanize" the MAb, replacing many of its original mouse-derived parts with the corresponding human amino acid sequence. Clinical trials soon followed.

The trials enrolled very sick women. The first pilot study had 10 women with breast cancer and 10 with ovarian cancer. All but one died within months, but the exception had an unexpected three extra years of life. Back in the laboratory, Slamon wondered whether teaming the MAb with another cancer drug, cisplatin, might be synergistic, because cisplatin enhances the binding of certain antibodies to certain receptors. (Cisplatin has its own intriguing success story, although it is not effective alone against breast cancer.8)

In the Phase I trial, to test for safety, 15 women with metastatic Her-2/neu+ breast cancer received the humanized antibody and cisplatin. (Ovarian cancer was dropped from the protocol because it was more difficult to assess.) The clinical endpoint, tumor size, was intentionally conservative. "An objective response means a 50 percent or greater decrease in measurable tumor mass," says Slamon. "A 45 percent decrease would not be counted as a response. We set the bar high so that what we see is real." Using this definition, the drug combination had a 30 percent success rate. This patient group too had its heroine, a survivor who was 50 when her breast cancer returned. So frustrated with conventional chemotherapy that she was considering alternative treatments in Mexico, she joined the Herceptin trial at her doctor's suggestion, not expecting much. But her neck tumor noticeably shrunk as the weekly infusions continued.

Phase II trials to address efficacy were conducted at the University of California, San Francisco, and at Memorial Sloan-Kettering Cancer Center in New York. Results continued to be promising, with about a quarter of the women improving by the 50-percent-shrinkage yardstick, and about half getting slightly better or no worse. There also continued to be the rare individual who completely recovered. Word spread, especially in the San Francisco area, and breast cancer activists, taking cues from AIDS activists, petitioned Genentech for compassionate use, which was finally granted in 1995.

Planning the Phase III trials, which would provide the numbers to support the success suggested in the previous trials, proved to be complex. Stage of disease, and previous and concomitant treatments, had to be considered. Finally, three trials got under way, with their results reported in the current crop of papers. A large trial (469 women) looked at those who had been treated with Cytoxan (cyclophosphamide) and Adriamycin (doxorubicin), a standard regimen. Half the women received Herceptin, and half placebo, but if a participant in the placebo group was not improving after eight weeks, she was offered Herceptin. In two smaller trials, 234 women who had not responded to chemotherapy and 235 women diagnosed with newly metastatic cancer who had refused chemotherapy received the drug.

Results were encouraging. "The studies show that this targeted therapy, directed at this molecule, can have therapeutic impact in response rate, duration of time to progression, and overall survival," Slamon says. Herceptin added an average three to four months of life, and decreased the overall risk of death by 20 percent. "About 8 percent of the women were cured; so far, 53 percent showed an overall response, and that includes complete and partial responses," he adds. The numbers are probably somewhat better than this, because the test used to screen for Her-2/neu positive participants in the trials did not distinguish between overexpression and gene amplification. This may have led to the inclusion of some individuals in whom the drug could not be expected to work, because it was later learned that it is the gene amplification subtype that responds.

The Herceptin story isn't over. "The next challenge is to move the drug up front," says Slamon. "It is now approved for metastatic cancer. Objective data demonstrate that we should see a better response when we treat at the time of initial diagnosis. We are testing this now in large Phase III trials." Herceptin is also being tested when teamed with another drug, Taxol (paclitaxel). Future studies also will address side effects, which are mostly limited to chills, nausea, weakness, and vomiting at the time of the potent first infusion, but dangerous weakening of the heart muscle also has been reported--in 27 percent of women taking Herceptin and Adriamycin, 13 percent receiving the antibody and Taxol, and in 4.7 percent of women taking Herceptin alone. The drug's mechanism of action needs to be better elucidated too. Slamon reports that it is more complex than a simple block to signal transduction.

Although there is clearly more work to be done, herceptin is already setting a powerful precedent. Sums up Slamon, "Herceptin is just one early demonstration that targeted therapy can work. A number of products are coming on line that will change the way oncology is practiced. As we understand genes and pathways that are involved in carcinogenesis, we will be better able to design and target therapy."

After initial disappointments with MAbs in medicine in the 1980s and 1990s, the success of Herceptin so far suggests that perhaps the time of the monoclonal antibody finally has arrived.

Ricki Lewis (rickilewis@nasw.org) is a contributing editor for The Scientist.
References
1. D. Slamon et al., "Use of chemotherapy plus a monoclonal antibody against HER-2 for metastatic breast cancer that overexpresses HER 2," The New England Journal of Medicine, 344:11:783-92, March 15, 2001. 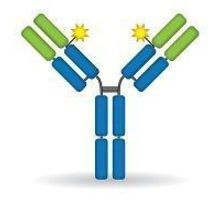