WASHINGTON--For J.R. Shealy, an electrical engineer at Cornell University, the Strategic Defense Initiative (SDI) isn’t about shooting down missiles. Instead, it’s a way to fund his pioneering research on growing semiconductor crystals. Shealy’s three-year, $660,000 grant comes from SDI’s Innovative Science and Technology (IST) program. His techniques make possible the production of precisely differentiated layers within semiconductors, and allow researchers to evaluate the performance of a device while it is still being formed. "This just shows that all SDI money isn’t going to put lasers in space," said Shealy.

Four years ago, the start of the IST program provoked about half of Shealy’s colleagues on the engineering and physical sciences faculties at Cornell to lead a nation-wide campaign against SDI research on university campuses. Now, much of the controversy seems to have died down.

"As far as I’m concerned, there’s a single pot of government money," said Shealy. “Whether it has an SDI label is beside the point."

SDI’s university research, according to several professors working on SDI projects, is governed by the same rules and generally managed by the same people that handle the rest of the Pentagon’s basic research budget. Despite the program’s emphasis on rapid development of technology through close cooperation with industry, fears that the research would be classified and publication rights restricted have proved unfounded.

"It’s exactly what I said four years ago: there will be no restrictions on university research," said James A. Ioson, the combative director of IST, who resigned last month to form his own company (see accompanying story). "[Critics] didn’t believe me then, and they probably won’t believe me now. But four years, tens of millions of dollars, thousands of researchers and hundreds of publications later, there have been no [secrecy] restrictions and no problems whatsoever."

Lisbeth Gronlund is one of those critics. The Cornell graduate physics student has coordinated the campaign throughout academe to boycott SDI research. She said recently that more than 7,000 faculty and research students in engineering and physical sciences across the country have signed the pledge not to work on SDI-related projects. This number, she said, has remained "pretty static" for the past two years.

Signers include at least half of the faculty members at 112 engineering and physical sciences departments at 71 universities, she said, as well as 57 percent of the combined physics faculty at the 20 top physics departments.

Part of the negative reaction to SDI, said Gronlund, "was due to the way Tonson tried to sell the program.” In 1985, Ioson announced that a number of major universities had formed a "consortium" to carry out major SDI research projects. In fact, as the presidents of MIT and Caltech made clear, the consortium consisted only of individual researchers who had received contracts.

But Ioson believes that those critics have missed the point. IST was created to give university researchers a role in the eventual creation of a missile defense system, he said, without subverting their commitment to basic research.

"This is a mission-oriented agency," said Ioson, "and our primary interest is advancing fundamental research through advanced research and into a product. At the same time, we don’t want to sacrifice the ability of a university researcher to do basic research.

"What’s different about this office is that we integrate the basic, advanced and applied research," he said. "The basic research is designed around what we ultimately need. That’s not always true of the services."

John Nation, another Cornell electrical engineer who is working on high-power microwave sources for SDI, agreed that IST research is more tightly tied to an ultimate product. "There’s much more pressure to meet schedules and define goals,"he said.

IST’s current budget is $143 million, and about 60 percent of it goes to universities. All of it is funneled through the research agencies of the Army, Navy and Air Force.

"We look within the services for the best technical program manager to run such a program," said Ioson. "We sit down with him and map out where we would like to go. Then it’s up to that person to go out and find the right horses to run that race."

In some cases, SDI has rescued research programs from budgetary oblivion. Howard Brandt, a physicist at the Army’s Harry Diamond labs in Adelphi, Md., saw some of his earlier work on high-power microwave sources resurrected as a major IST program. The devices could be used either as radars based in space to detect targets or as weapons to disrupt and destroy satellites or missiles. "We are emphasizing things that there wouldn’t be any money for otherwise," said Brandt, who became its program manager.

The Army benefits from the program as well, said Brandt: If microwave devices can be made that are powerful enough to disrupt equipment thousands of miles away, they certainly would be useful for the Army, which generally tries to hit targets only a few miles away. "My work should complement the rest of the lab’s work,"said Brandt, “and it certainly is additional money coming into the place."

"Obviously, our laboratory did not turn upside down as a result of IST funding," said Richard Tempkin, head of its coherent source division, about the grant’s impact on the center’s $25 million budget. "But we can do a lot with that amount of money. These are very high-risk experiments that we are trying, and we would not have had an opportunity to try them if we had not gotten the SDI funding."

Charles is a freelance writer in Washington, D.C.. 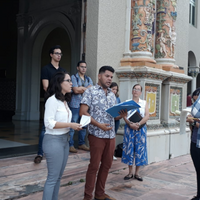