BOSTON--By significant margins, and in surprising numbers, members of the American Mathematical Society (AMS) have voted to oppose the administration’s SDI program and military funding of their discipline. About 7,000 members nearly twice the number that normally vote each year for the society’s officers, cast ballots on one or more of the five resolutions.

The first resolution, passed by 57 percent of those who voted, expressed the society’s refusal to lend “a spurious scientific legitimacy” to the SDI program by endorsing or supporting it. The measure states that the AMS “will lend no support to the Star Wars program” and that "persons representing the AMS shall make no efforts to obtain funding for Star Wars research."

Yale mathematician G.D. Mostow, AMS president, said that the voting "reflects widespread skepticism in the mathematical community about the ability of the SDI program to achieve its stated objectives. It also reflects concern about SDI’s incalculable cost and the waste incurred by premature deployment."

By a two-to-one margin, AMS members agreed that military funding "may skew and ultimately injure mathematics in the United States." The resolution urges AMS members to direct their efforts towards increasing the fraction of non-military funding for mathematics. Three other resolutions, adopted by overwhelming majorities affirmed the importance of smaller, individual grants, basic research efforts, and diversified peer review—attributes that are notably missing from most Defense Department grants in the field.

William Thurston of Princeton, one of the originators of the referendum questions, said he is pleased with the high tumout and “vigorous debate” spawned by the issues. The motions were introduced in part in response to a $10 million program in mathematics begun by the Defense Advanced Research Projects Agency (DARPA). The AMS agreed to the mail vote after 400 members signed a petition that urged the society to take a stand.

Thurston said he hoped the vote will spur other professional societies to address those issues. But Judith Sunley, director of the mathematical sciences division at NSF, said "the strong endorsement of civilian funding, is not surprising, given the “minimal contact” that most AMS members have with defense agencies that fund basic research."

Shulman is a freelance writer in Cambridge, Mass. 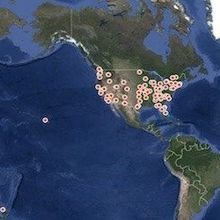