The eyes may be windows to the soul, but the nose is a gateway to the mucosal immune system. Drug companies are now developing vaccines to take advantage of that gateway.

"If you can stimulate the mucosal immune system--that's the majority of the immune system," explains Larry G. Stambaugh, president and CEO of Maxim Pharmaceuticals of San Diego. "That's where infections enter." Injected vaccines trigger antibodies in blood serum and sometimes work by unleashing a cytotoxic T cell response that occurs only after a pathogen has invaded the bloodstream. Maxim is developing a molecule that will fight the pathogens at the mucosal surfaces by preventing them from further invading the body.

Recombinant cholera toxin subunit B (rCTB) provides the heart of the company's proprietary molecule. Maxim scientists chose rCTB because it can link to and carry other antigens as well as boost the body's immune response to the passenger antigens. In a recent study, scientists administered the molecule both orally and nasally. The study concluded that nasal administration provided a stronger immune response in the upper respiratory system than oral administration (A. Rudin et al., Infection and Immunity, 66:3390-6, July 1998). Stambaugh notes that the molecule could be used strategically, depending on which area a disease is most likely to enter: nasally for an upper respiratory infection, orally for gastrointestinal disorders, or vaginally for sexually transmitted diseases. The company hasn't yet developed vaccines against specific diseases; instead, it is seeking partners who already hold rights to antigens, according to Stambaugh.

He notes that previous approaches to delivering proteins to mucosal surfaces have been hampered when the protein fails to reach its destination and becomes degraded by the body. Maxim's proprietary system overcomes that by better targeting, although Stambaugh declined to elaborate on the mechanisms to The Scientist because the company has submitted a paper to New England Journal of Medicine for fall publication. He notes that the molecule affects the whole mucosal system, however. For example, rCTB administered nasally also resulted in some antibody response in the female urogenital tract.

Aviron, a Mountain View, Calif., biotech company, has a nasal flu vaccine that successfully targets the mucosal system but doesn't rely on rCTB as an adjuvant. J. Leighton Read, Aviron's chairman and CEO, notes that the mist, which features a weakened live flu virus, fights the illness three ways: through circulating antibodies in the bloodstream, the mucosal antibodies at the site of infections, and cytotoxic T-cell responses.

Although a flu shot delivers a stronger blood serum antibody response, it doesn't provide a mucosal response, and the shot's cytotoxic T cell response is also weaker than the mist's, Read asserts. Previous studies that pitted a nasal spray against the shot in head-to-head adult studies showed no statistical difference in efficacy, Read reports. In the latest study, the mist was 93 percent effective in children exposed to influenza in the environment (R.B. Belshe et al., New England Journal of Medicine, 338:1405-12, May 1998).

The similarity in protection levels means that consumer concerns could dictate which approach wins in the market. "From the point of view of the user, nasal spray may offer some valuable advantages, compared to rolling up your sleeve and getting a shot," Read comments. In addition to needle anxiety, the approach also circumvents concerns about blood-born pathogens. The mist also reduces inner ear infections in children. However, few children now receive flu vaccination, and an accompanying editorial in the May New England Journal of Medicine reports that immunizing children against flu may not be cost-effective. A small percentage of subjects who received the spray also complained of low-grade fevers and runny noses a day after vaccination.

Following completion of the Phase III trial, Aviron filed an application June 30 for FDA approval to market the product, and Read hopes for a fall 1999 launch. In addition to vaccinating adults at the workplace, Read thinks the mist--paired with the shot--will be useful in nursing homes, where flu kills 20,000 people a year. "There's evidence to suggest that when you add the shot to the mist, you get much-improved protection," Read notes.

Peter Daddona, vice president of biological sciences at ALZA Inc. of Palo Alto, Calif., agrees with both Stambaugh and Read that the mucosal approach is theoretically elegant. "There's been a lot of excitement about mucosal vaccines--either orally, or nasally, or vaginally--whereby by presenting the vaccine via those routes you can get an IgA [immunoglobulin A] response. This is your first primary defense mechanism against something that's coming into the body. The IgA is secreted on the surface of the mucosa--both in the nose, in the vagina or in the gut--so if it sees the bacteria or the virus, it will bind it up and basically eliminate it. It never makes it into the body." Also, Daddona, whose company focuses on transcutaneous delivery systems, comments that any system that triggers a variety of immune responses has better chances of succeeding than those relying on one.

However, Read prefers efficacy over elegance in determining a vaccine's success. "In the end I think you have to compare vaccines not based on their theoretical attractiveness, but on how well they actually work in real trials," he concludes. * 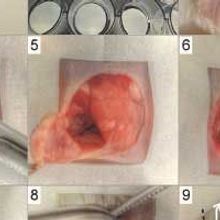