Theoretically, scientists should be able to deliver antigens against E. coli, cholera, or other diarrhea-causing pathogens in just about any fruit or vegetable. But practicality may trump technology when it comes to picking how to package an edible vaccine.

The first human clinical trial featured raw potatoes (C.O. Tacket et al., Nature Medicine, 4:607-9, May 1998). The potatoes--which were engineered to express LT-B, an enzymatically inactive enterotoxin secreted by E. coli--were well tolerated and stimulated an immune response in volunteers. Tests showed that the transgenic vegetables created immune responses in both blood serum and the intestinal mucosa. However, the uncooked spuds also caused mild nausea in some subjects. And children, for whom these vaccines are being developed, may turn up their noses. "Clearly, raw potatoes are not very palatable to kids," notes Carol O. Tacket, a researcher at the University of Maryland School of...

Another preclinical study featured uncooked potatoes containing weakened cholera toxin. The potatoes produced blood serum and mucosal immune responses in the mice to which they were fed, reducing cholera-related diarrhea in the mice by about 60 percent (T. Arakawa et al., Nature Biotechnology, 16:292-7, March 1998).

Investigators then cooked the potatoes to determine how much of the CTB would be degraded. About half the viral protein survived the heat. However, cooking potatoes with the E. coli protein likely would destroy it, since the E. coli protein is less stable, according to Gregory May, assistant research scientist at the Boyce Thompson Institute for Plant Research (BTI) at Cornell University. Charles J. Arntzen, BTI's director, and colleagues developed the transgenic vegetables for the first human clinical trial, and researchers at the University of Maryland conducted the clinical testing. May agrees with Tacket that the potato may not be the best candidate for the vaccines, which, scientists at the institute say, are being designed with children in the developing world in mind. 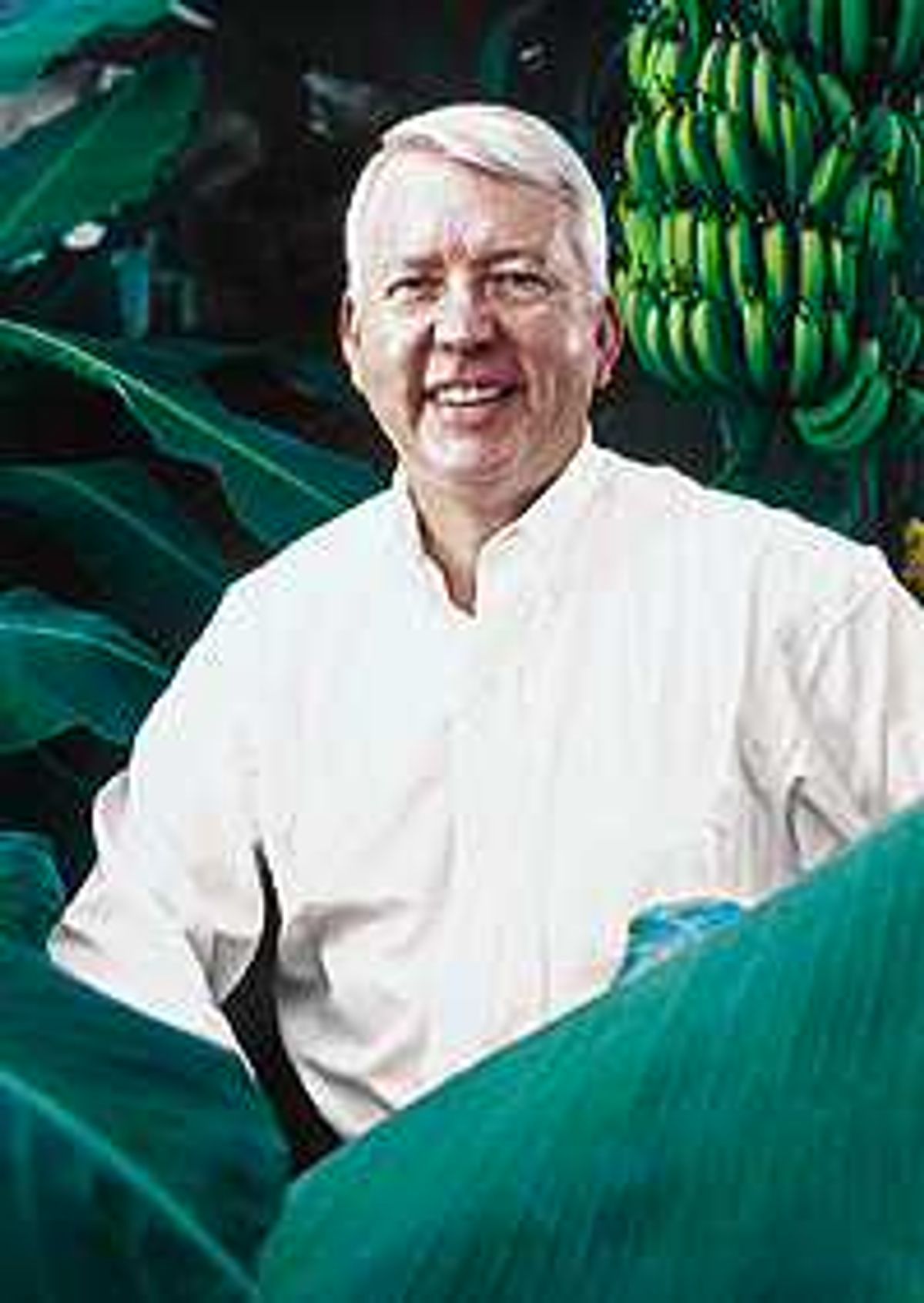 BANANA BOOSTER: Boyce Thompson Institute director Charles Arntzen and colleagues have developed a transgenic banana that carries antigens against E. coli. The banana may be more palatable than a raw potato vaccine that the group developed and that a University of Maryland group tested clinically.

Still, William Langridge, professor of biochemistry, microbiology, and molecular genetics at Loma Linda University in southern California, holds hope for the tuber. His group, which participated in the cooked potato experiment, generated high levels of vaccine protein--0.3 percent of the total soluble protein, up from the 0.01 percent of earlier efforts--by engineering the potatoes to amplify the amount of protein they produced. Langridge is developing ways to further increase protein amounts. He also notes that additional feeding of the potato acted as a "booster" for the mice, increasing blood and intestinal levels of the antibody.

One possible way around the palatability problem is using the cholera-expressing potato as a vaccine against both E. coli and cholera. "Since the LT-B and CTB enterotoxin molecules are similar in structure and since cross immunization has been demonstrated previously, it should be possible for the plant to deliver protection against both cholera and enterotoxigenic E. coli," Langridge explains.

Another plant may be more viable, May surmises. "I think banana is an awfully good candidate, but tomato will certainly be easier because of its ease of transformation and its short generation time," May explains. He notes that each fruit or vegetable vaccine carrier candidate has its own set of advantages and disadvantages. Children like bananas, the fruit grows in many of the areas where anti-diarrhea vaccines are most desperately needed, and it doesn't have to be cooked in order to be swallowed without gagging. On the downside, a new crop takes about 12 months to bear fruit. Once the vaccine-bearing bananas have been plucked, the plant must be cut down, then the year-long wait for a new batch begins anew. In contrast, tomatoes have a fairly short propagation time on their side. They also share with bananas the lack of need to be cooked. But May questions how children will take to them. Tomatoes also might not grow well in parts of the developing world where edible vaccines are most needed.

Fortunately, May says, the science behind transforming fruits and vegetables into vaccine factories is fairly straightforward. It was first developed by Roy Curtis III, professor of biology at Washington University in St. Louis, and Guy Gardinaeu, a scientist with Mycogen Inc. of San Diego. The two scientists literally invented the procedure in a car, according to Gardinaeu, who was a graduate student at the time. But neither has been driven to apply it, although Mycogen, which holds the patent rights, has licensed it to other companies.

The ability to apply the technology lies in understanding the candidate plant's genomics, remarks May, who helped developed a transgenic banana vaccine for BTI. "The key is to understand how a promoter will behave in the fruit," May notes. "You look for genes that you know are expressed in the fruit and use genetic elements from those genes to drive expression of the foreign protein. Then you generate an expression cassette that has that genetic element plus the gene for your foreign protein--in this case an antigen. Then you reintroduce that back into the banana DNA." After that, the banana plant should produce vaccines for the life of the plant.

Still, barriers to the oral vaccine lie beyond the ability to produce them, notes Gregory M. Glenn,  scientific director of IOMAI Inc., a Washington, D.C., company that is developing transcutaneous vaccines utilizing recombinant cholera as an adjuvant to heighten immune responses. "Some of the worries one has when you put an adjuvant into the mucosal system is, if you've just had a [hamburger], you've got other proteins there, and so, could you induce allergies?" He also notes that, in order for the approach to be successful, the proteins need to survive the gastrointestinal tract--a goal that has eluded other potential oral protein approaches, such as insulin pills. "It has to survive the gastric pH, and that's a critical problem for a lot of antigen delivery," Glenn comments. "You have to get antigens through a very hostile environment."

Researchers at the University of Massachusetts Medical School slipped a DNA vaccine past gastric obstacles by wrapping it in a biodegradable polymer, rather than in fruits or vegetables. The DNA vaccine produced both a blood serum response and mucosal antibodies against the rotavirus in the mice who swallowed it. When challenged with the rotavirus 12 weeks after the immunization, mice who received the DNA vaccine had lower levels of the rotavirus than controls (S.C. Chen et al., Journal of Virology, 72:5757-61, July 1998). John E. Herrmann, University of Massachusetts professor of medicine, notes that the oral vaccine has benefits over other DNA delivery methods, such as gene guns and intramuscular injections. "The advantage is simplicity of administration," Herrmann notes. "Plus, you may be targeting mucosal tissues." Still, researchers have yet to prove whether mucosal immunity provides greater protection than blood serum antibodies.

Although cloaking antigens in fruit and vegetables may well allow the vaccines to survive the GI tract, Tacket notes that, in the United States, at least, it will take years of laboratory tinkering and many clinical trials before fruits and vegetables surpass needles as a vaccine delivery vehicle. "Other vaccines have tremendous safety records, which we would have to match," Tacket concludes.